A roof with multiple eaves complicates the layout, requiring a number of adjustments.

Establishing Parallel Vertical Control Lines on Jogs in a Roof 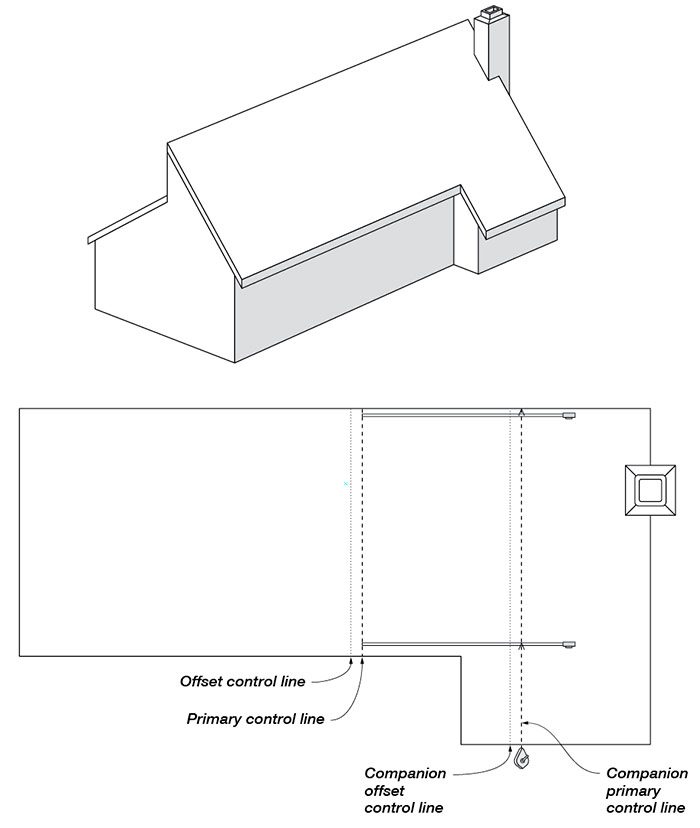 Again, the vertical control lines are needed only for three-tabbed shingles. Lay out for the primary vertical control line using the method described in the article Control-Line Layout. Measure to each of the rake edges from the control line to see that you’ll end with a shingle piece longer than 6 in. and that the last tab will be 1½ in. wide or greater. Try to shift the vertical control line so the shingles will end within the 6-in. and 1½-in. minimums. Sometimes you won’t be able to meet this standard on every rake, usually breaking the 1½-in. tab rule. When you can’t avoid tabs narrower than 1½ in., plan to seal them down with a dab of asphalt cement.

Where a roof section jogs below or above the main part of the roof, you’ll need to snap a companion set of vertical control chalklines for the shingles to follow until you reach the main roof. The process is similar to marking a secondary vertical control line on the opposite side of an obstacle.

If a roof plane jogs down, it’s unlikely that the horizontal spacing for the main part of the roof will give you full shingles along the jog’s eaves, so you have two choices. You can continue the horizontal alignment of the main roof and trim the butts at the jog eaves, or you can reduce the exposures on the jog to result in a full-shingle first course.

If you decide to trim the first-course butts, mark and snap horizontal control chalklines for the starter and first course of shingles along the longest eaves edge. Extend the chalklines through the jog.

On the jog, measure down from the primary horizontal first-course line in course-exposure increments to mark and snap chalklines. Stop snapping chalklines when you reach the first exposure increment within 12 in. of the eaves edge. This will be the top of the first course of shingles. Mark for the starter shingles in the normal way, allowing for drip-edge overhang. After you install the starter shingles, measure from the bottom edge of the starters to the first control line, and trim the first-course shingles to this height.

Reducing Exposures on the Jog

Here’s a math-avoiding method to reduce the shingle exposures on the jog if you decide you want a full course at the jog’s eaves. Again, start by continuing the starter- and first-course horizontal lines from the main roof across to the jog (see the illustration).

Adjusting Course Exposure (Height) on Jogs in a Roof 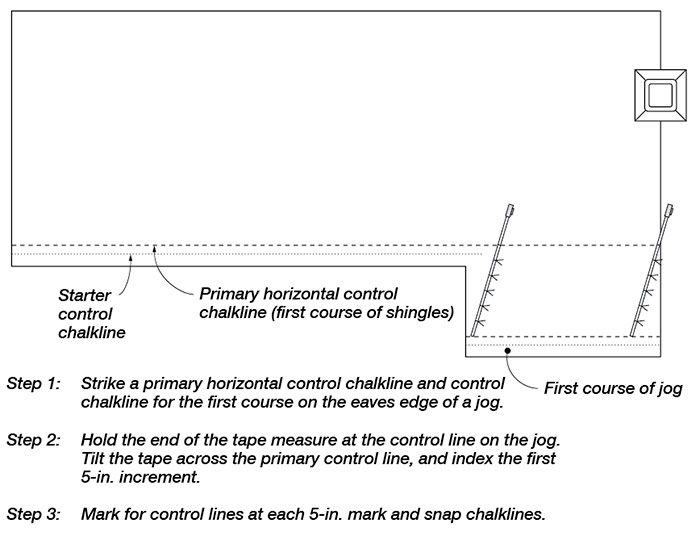 At the eaves of the jog, mark control lines for the starter and first course exactly as you would for a main roof. Before you snap lines between the marks, measure up to make sure these lines will be parallel to the lines you extended across the main roof. If they aren’t, make minor adjustments up or down until the marks are parallel and the resulting shingle overhang is ¼ in. to ¾ in. By making this adjustment, the shingle overhang won’t be equal beyond the drip edge, but the shingle courses will be parallel. Now snap the starter and first-course lines at the jog eaves.

Measure from the 12-in. line along the jog eaves up to the line extended from the 12-in. line for the main roof. Most likely the measurement won’t be divisible by 5-in. increments, so you’ll need to reduce each course by an equal amount. Here’s the math-avoiding trick: Drive a nail into the jog’s 12-in. line with the head protruding enough to hook your tape. You don’t need to measure the position of the nail—just put it near one rake. Hook the tape and pull it past the main roof’s 12-in. line, then tilt the tape until the next 5-in. increment crosses the line. Have someone mark every 5-in. increment along the tilted tape. Repeat the process near the other rake, then snap control lines between all these marks.

Previous: Establishing Control Lines around an Obstacle Next: How to Get a Good-Looking Layout with Laminated Shingles