How to Get a Good-Looking Layout with Laminated Shingles

To avoid unintentional patterns, randomize the offset distance between shingles in successive courses as much as possible.

My cousin had laminated shingles installed on his home in northern Minnesota. The installed shingles have a wavy pattern, and the laminated layers seem to be the same from shingle to shingle. Instead of a random pattern, the laminations line up from course to course to look like tigerstriping on the roof. The manufacturer says there’s nothing wrong with the shingles, and the contractor says there’s nothing wrong with the installation. So how can this problem be avoided?

Mike Guertin, author of Roofing With Asphalt Shingles, replies: My initial reaction is that there probably is nothing wrong with the waviness of the shingles. Laminated shingles often are bent along the centerline because of the bundling method, which gives them a “wave” until they have a chance to heat up in the sun repeatedly and flatten out. On my house, the laminated shingles took a year to flatten out. But the repeating pattern of the laminated cutouts is unusual.

But even if the installer followed the starter instructions, a pattern may develop depending on how the manufacturer’s dies cut the shingles. To avoid problems with a pattern showing up in what’s supposed to be a randomly shingled roof, the key is to randomize the offset distance between shingles in successive courses as much as possible.

I use the recommended starter cuts for the first five or so courses and run the courses to the other end of the roof. I collect the cutoff pieces and use them to make the next starter pyramid. If there aren’t enough usable cutoff pieces for starters, I cut full shingles and continue with the next five courses. I try to pay close attention to the laminated cutouts and skip shingles in a bundle if I notice a pattern developing. I’ve also found that mixing shingles from different bundles into each horizontal shingle course helps. 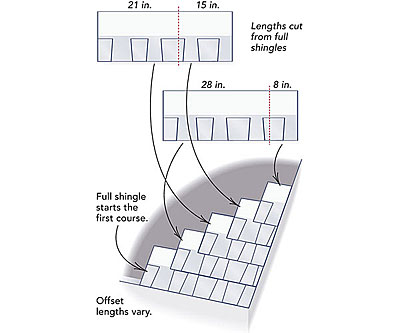