When I built my own house, I borrowed walking jacks from my lumberyard and raised the walls myself. My lumberyard doesn’t lend the jacks anymore, but they sell them for $95. In Portland, they can be rented for about $8 a day. The jack has a slot that accepts a 2×4 upright and sharp clamps, called dogs, which grip the 2×4 to raise the jack when the lever is operated. A 3/4-in. pipe inserted in the jack acts as the lever.

Build the wall section on the floor, but before attaching the exterior sheathing, toenail the bottom plate to the subfloor with 16d nails 3 ft. on center. The nails, bending as the wall is raised, will act as a hinge. Nail a block to the decking behind the upright, so the jack won’t slide out of position. Temporary bracing keeps the wall section from continuing past vertical. I raised 20-ft. sections of wall with one jack and 30-ft. sections using two. The jacks are equally good for lifting heavy beams into place when used with rope pulleys and hoists. 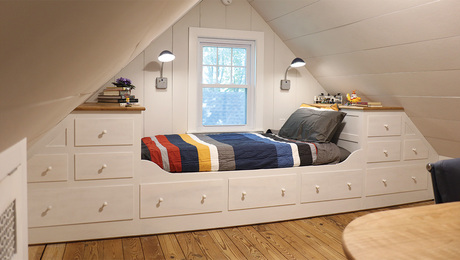