I need to construct a 12-sided figure with a certain radius. How do I find the length of one of its sides?

Great, you say, but what does it mean? It means that any side of your dodecagon, when it’s sliced into 12 triangles, equals the sine of one-half the central angle multiplied by twice the radius.

You can get the sine of a given angle from an algebra book, a scientific calculator or a really nerdy guy with tape on his glasses. The sine of 15° is .2588.

Because you don’t say what the radius is, I’ll pick a nice round figure: 10m (for those of you still unfamiliar with the metric system, a meter is something at the side of the road that you put quarters into when you park your car beside it).

By the way, I found this equation in a book by Johnny and Margaret Hamilton called Math to Build On (Construction Trades Press, 1993; see FHB #85, pp. 132, for a review). 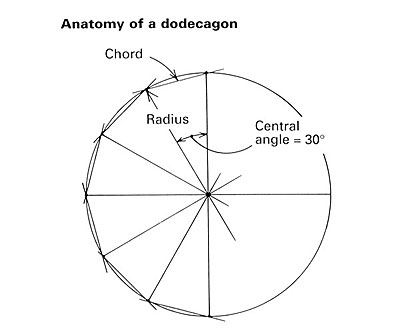