Digging and pouring a foundation with the house suspended in the air require patience, great subs and a little sleight of hand.

Synopsis: Lifting up a house to rebuild or replace its foundation is a job for pros. A builder given the task of rebuilding a lakeside cottage calls in veteran house-movers and offers this explanation of how they managed the seemingly impossible.

It was a cold, snowy day in February when Jack Venning, a second-generation house mover, and I met to check out the project and site conditions. As the cold, wet wind blew off the lake and down the necks of our jackets, it was obvious that winter was not the time to be lifting this house in the air.

The project was the renovation of a cottage that had been sitting on an odd assortment of deteriorating wood and block piers. My clients owned the cottage but leased the land, a common lakeside arrangement here in western New England. Tearing down the cottage initially would have left them with nothing on the land and with no legal claim to the site, and getting new construction authorized would have been nearly impossible. Also, because of local regulations, leaving the cottage in place meant fewer restrictions for installing an urgently needed new septic system. The solution seemed simple. We had to keep the existing cottage and build a new foundation for it. That’s where Jack’s expertise would come in.

No place to put the house

Because the leased lot was so cramped, we had no room to move the cottage away from its footprint. The only way to go was up. The building had to be lifted high enough to excavate for the footings, foundation and crawlspace. But to complicate matters, the cribbing that would support the house during all this work had to be well inside the perimeter of the footprint so that we could dig our frost-wall trenches.

The steel beams that the house was to rest on during its time in midair had to be beefy enough to cantilever from the cribbing piles out beyond the perimeter of the house. The beams and cribs also had to be strategically placed to leave space under the house for the piers and LVL beams that would support the floor of the rebuilt house.

Keeping water away from the site

Before we could start the lift, we had to think about water, both rainwater and the water in the lake that was a mere 20 ft. from the back of the house. Working with an engineer’s approved plan, we staked hay bales and siltation fencing along the water’s edge as an erosion-control barrier.

The fencing, available at most contractor-supply houses, comes with the stakes already attached to hold it upright. The hay bales were staked in place with the cut edge down so that the bales could follow the contours of the ground. We also built a 20-ft. dia. siltation pond of hay bales and fabric fencing. Any water that got into the footing trenches would be pumped into our pond where the silt could settle out before the water seeped back into the lake. 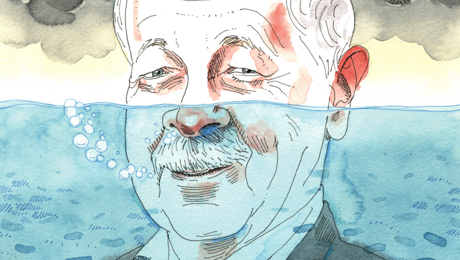 This architect encourages finding the right questions to ask before turning to building science for easy answers.

View All
View All Maintenance and Repair Articles
Shop the Store