I have an old house that’s been added on to many times. There are several basement areas, all with slab floors of different elevations. I am breaking up the basement slabs so that I can install concrete piers and lally columns to support the building. While I’m at it, I’ll install a drain around the inside of the foundation walls. Then I’ll place a new slab at one continuous level throughout the basement. The basement is fully below grade, and the soil is dense hardpan. But several of the foundation walls—some are 10-in. block, some are 12-in. thick poured concrete—do not rest on footings. Because I’m digging as much as 24 in. below the walls, can you suggest a way to hold the existing walls in place?

Christopher DeBlois, a structural engineer with Palmer Engineering in Chamblee, Georgia, replies: Though it may look like a recipe for trouble, the lack of footings under your basement walls is not necessarily a big deal. The weight on a typical basement wall, including the weight of the wall itself, is usually less than 2,000 lb. per linear ft. (plf). A standard (and usually conservative) allowable bearing stress for undisturbed soil like your hardpan is 2,500 lb. per sq. ft. (psf). As a result, the stress on the soil under your 12-in. thick walls is within the limits of the soil.

What, then, is the purpose of a concrete footing? There are at least three good reasons to place a wide, continuous footing under basement walls. First, the allowable soil stress in certain soils may be relatively low, and the actual weight on certain walls may be relatively high. In such a case, spreading the load over a larger area than just the width of the wall is crucial.

Second, soil properties can vary over short distances. A reinforced-concrete footing can help transfer loads across soft spots, particularly for block walls. Poured-concrete walls tend to act as deep beams to traverse soft spots with or without the help of a footing.

Third, footings provide a terrific base for masonry walls. The first course of block is supported much more evenly when it sits on a concrete footing than when it just bears directly on soil. If you’re pouring a concrete wall, it’s a whole lot easier to set formwork on a footing than on soil.

All that said, is it worthwhile to retrofit a footing to an existing basement wall? For a wall that has served well for 10 or 25 or 70 years, no. The potential pitfalls involved with undermining the wall before the footing goes in are far greater than any benefits the footing might provide. It is crucial, though, to provide support for the bottoms of the walls to keep them from moving in toward the basement and to confine the soil supporting the weight of the wall. So you’ll need some kind of retaining wall/footing to keep the existing walls in place. The illustration shows my design for building a monolithic, steel-reinforced concrete retaining wall/footing.

Without seeing the conditions of the site, I can’t give precise dimensions; consult an engineer for this information. Your contractor should take steps to shore up the disturbed soil and foundation before the retaining wall is placed. 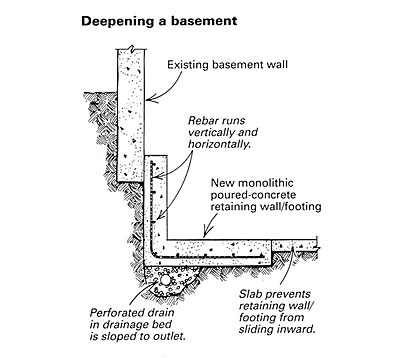 Our latest issue features HOUSES 2020: The Best Homes of the Year, energy-efficient water heaters, building a craftsman-style mantel, and much more.