The foundation is formed using Amvic 3.30 insulating concrete forms (ICFs). The blocks are formed with 3 1/4 in thick EPS panels tied together by heavy plastic ties spaced 8 in. The EPS is much thicker than the standard 2 in. resulting in an effective R-30 insulating value. 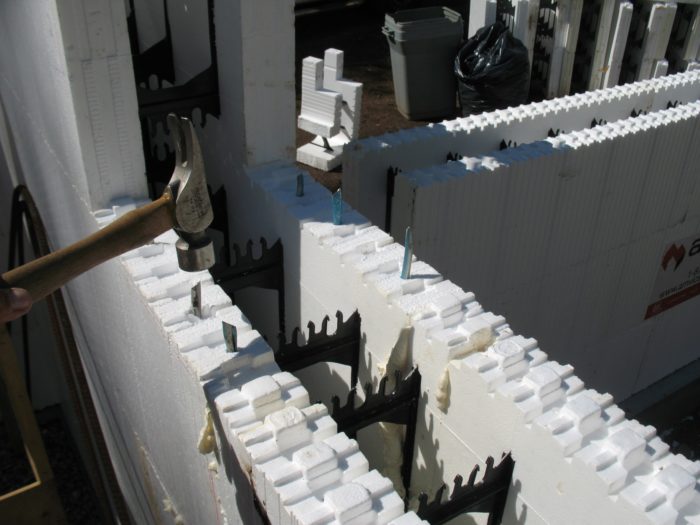 The blocks stack and interlock quickly with the only time-consuming process being where we have to make custom joints. The Amvic blocks can be cut and interlock at 2 in. increments but when any plan dimension falls anything less than a 2 in. increment then we have to carve off the teeth that lock block courses together and stitch them together manually.   Ordinarily tying together blocks with the interlocking teeth removed is done with braces screwed onto the face of the blocks. We tried something different.   I cut some scrap metal tube into 5 in. long pins and fashioned points at the ends. 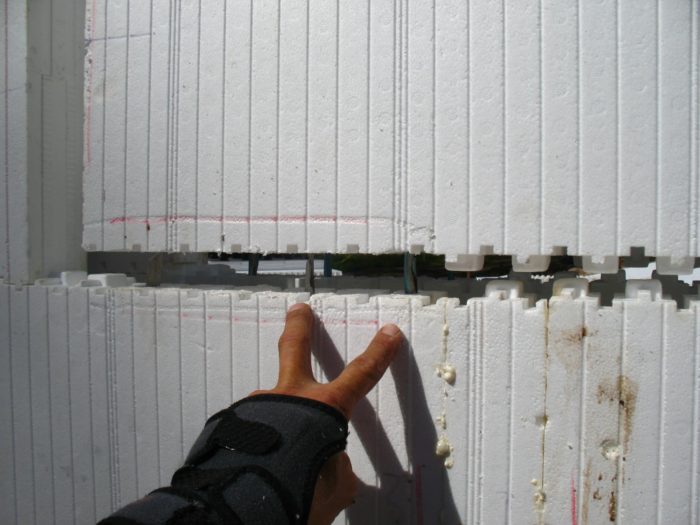 We drove the tube pins halfway into the installed block where the teeth were removed and placed the mate above. The tube pins help lock the blocks laterally and longitudinally. 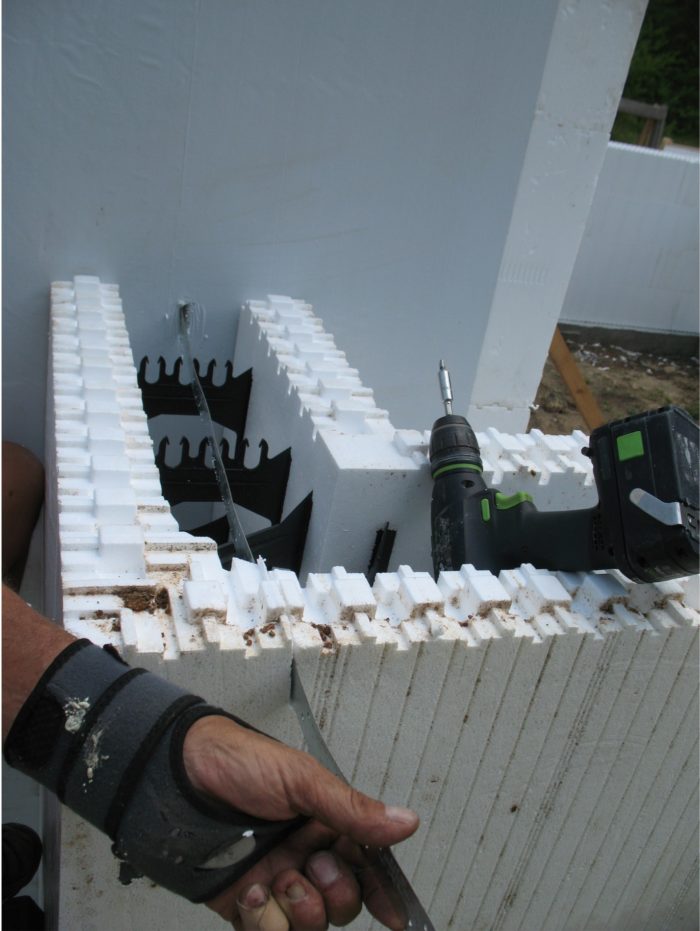 We had 4 ‘T’ joints but the Amvic 3.30 system doesn’t have a ‘T’ block. One option was to fabricate some custom ‘T’ blocks from other blocks, another option is to run threaded rod to tie the walls together but Bruce came up with a fast alternative – just butt the ‘T’ wall into the already placed forms and run some galvanized metal strap through the forms. We set the strap as we positioned each course. We screwed the strap to either the inside of the web ties or pushed the strap through the opposite panel wall, bent it onto the face of the block and screwed it into the webs. 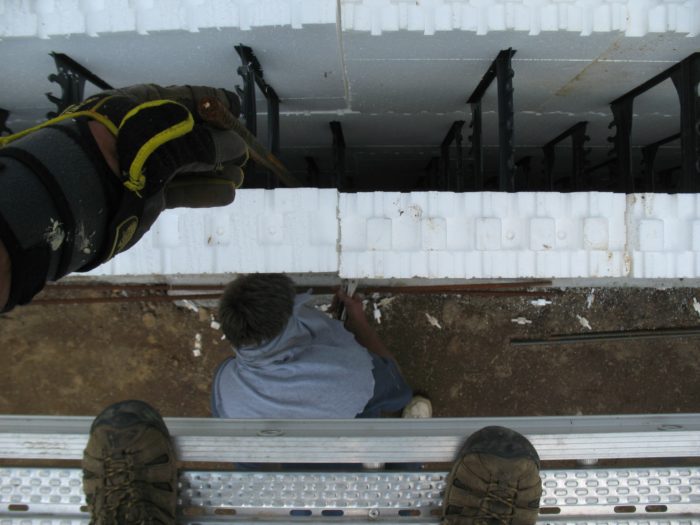 As the 16 in. tall block courses were stacked we placed and tied 5/8 in. horizontal rebar as prescribed by the engineer. Vertical rebar was placed and tied after we reached the top block course. But tying the bottom of the vertical rebar to the rebar dowels that we set in the footings before pouring them has to be planned well in advance. Before stacking the second course of blocks we placed a loop of plastic zip-ties around the rebar dowels placed in the footing. The end of the tie loops poked out of the side of the blocks. Then when the blocks were stacked, I dropped the vertical bars alongside the dowels and inside the zip-tie loop. Bruce yanked on the zip-tie end with a pair of gripping pliers.

One great thing about building with ICFs is you can form tall basement walls – taller than standard 8 ft. residential style forms permit.   I wanted 8 ft finished ceilings in the basement so after stacking 6 courses of blocks we added an additional 6 in. ripped block. Once the 2 1/2 in. of slab insulation is installed and 4 in of concrete we’ll have 95 1/2 in. from the top of slab to top of foundation. Add 1 1/2 in. for the mudsill and we’ll have 8 ft. – 1 in. slab to joists.

It took Bruce and I about 1 1/2 days to set the forms and another day to brace, stage and string-line the forms.