I’ve always been skeptical of battery-operated tools that claim to be direct replacements for corded tools, but when my corded right-angle drill was stolen and I needed a replacement, I decided to give cordless a try. I settled on DeWalt’s DCD460T2 60v max right-angle kit. This drill is part of DeWalt’s new dualvoltage Flexvolt platform, which means the 60v packs are compatible with DeWalt’s 20v power tools; the pack identifies what tool it’s in and switches the voltage automatically. 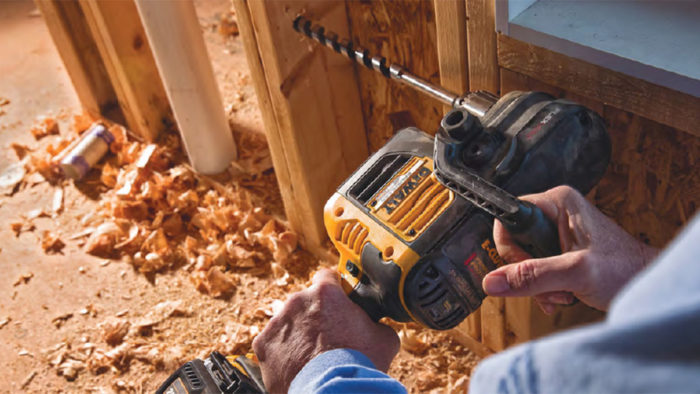 The drill has a heavy-duty 1⁄2-in. keyed chuck, a variable-speed trigger, and a two-speed transmission (0-300/0-1250). One of my favorite features is the electronic clutch , which prevents the drill from rotating when the bit binds. It’s a real arm saver when I’m using big hole saws in tight spaces and is a huge leg up on my former corded right-angle drill. It’s completely necessary, too, given the immense torque of this drill.

My first project with the drill was on a turn-of-the-century farmhouse with white oak framing. The tool enthusiastically drilled through the ancient timber with everything from a 7⁄8-in. auger bit to a 45⁄8-in. hole saw and had very few binds along the way. Battery life is also impressive, with one 6 amp/hr pack lasting an entire workday of rough-in plumbing.

This is not just a direct replacement for my corded right-angle drill—it’s superior to it. It performs flawlessly, and not dragging around a cord has increased my productivity. It’s a few ounces heavier than the corded version of this drill, but the convenience of cordless far outweighs the difference. 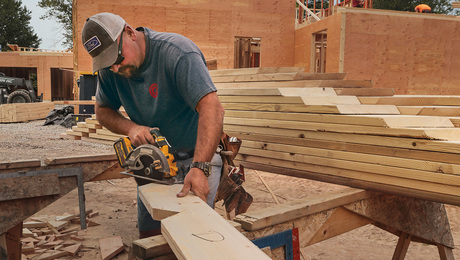