Hello to ones here,

I have a question about the fit of a door in an old house where we’re pulling off the casing and stripping and shellacking and replacing. A piece of the casing was curved and we didn’t know this when it was being stripped and shellacked. It came off the side of the jamb opposite the door side, and, because it was in better condition than the pieces on the door side. So, it went on the jamb next to the hinge edge of the door. As I installed it I pried it over to meet the edge of the jamb surface because of the curve in it. BUT, now, the jamb is curved, also. And, it is curved toward the door. So, the door actually hits the jamb, now, when you close it. Where there was a 3/32” gap between the door and the frame/jamb, now, it is a little less than 0”. And, it is curved relative to the door – so, at the top and bottom of the door the gap is 3/32”, but, at the middle or a little higher, the door and frame/jamb interfere. Lastly, we have spring bronze weatherstripping to install, once we have the gap for it. I should add that this door is the inner door of the front vestibule in an 1890s brick row house in D.C. We are weatherstripping this door because this door fits so much better than the front door. Finally, also, we don’t have the option of changing the casing because I made cut-outs for the hinges and we don’t want to make a repair to these and they would be visible through the shellac – the whole point was that this wood was in such good condition for the purpose.

We have come up with two choices of what to do about this door and jamb interference. My friend, who owns the house, wants to just plane the door to fit the curve. I wonder, then, if the spring bronze would wrap itself around the curve properly without flattening itself out because of the inner and outer edges of the strip having to wrap the curve and are the same length. Or, some other unforeseen problem take place at some time. It does seem like such a slight curve might not be a serious problem for the bronze strip. BUT – I am not certain, at all, really.

The other idea I had was to pull off the casing and hold it in a straight position and screw and epoxy lengths of 1/8” x 1” steel bar to the back of it to hold it straight and reinstall it.

I came to this site for further input. Maybe someone has a better idea. Or, at least, notions of which of our plans is best in their opinion. Certainly, the planing would be easier. And, my plane was just freshly professionally sharpened for the first time ever. BUT….    What ARE the “buts” in the matter? What are unconsidered, unseen, unknown things we haven’t thought of or noticed, etc.? What other ideas does anyone have? Just checking. 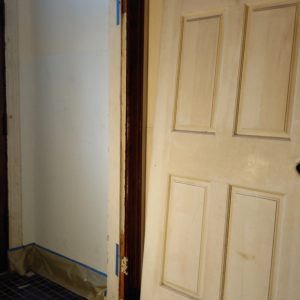