THE BASEMENT FROM SCRATCH

I’ve been meaning to post some photos of a very satisfying basement project I just completed. It has lots of interesting elements that could provide grist for a few mills out there, and I learned a lot doing it, too.

I wish I had more pix of the earlier stages of the job, but my trusty Canon A1 35mm got a bad case of the hiccups early on, and Ryan’s fixed aperture 50mm Vivitar didn’t have a wide enough lens to capture much inside that small space. So until I got the digital, I don’t have too many shots that are decent.

The house is a four-year-old spec house GC’d by one partner in a two-man shoestring development operation. After he and his family had been living in it for three-and-a-half years, he sold it to my clients, an American couple from New Jersey who wanted a property up here to use as a summer cottage/ski chalet. The next house down the road belongs to one of my regular clients, also from the U.S., so they got together with their new neighbors and ‘talked house’ for a while. The new neighbors mentioned they wanted to finish the basement, so I got a call the next day and dropped by to see what was up.

The basic requirements were fairly simple: The clients wanted a full bathroom, one bedroom with a new closet, and a large, open family room. They also wanted the utility room partially finished. The existing condition of the basement was bare slab floor and gyprock over foamed-in studding against the exterior walls. Only the partition walls around the utility room had been rocked. The rest were bare studs. What gyprock there was had been taped and mudded once, but it was a pretty brutal job.

My first design called for the bathroom to be surrounded by a half-height wall with fixed, milk-glass windows above, so as to preverve as much as possible light entering that corner of the basement through what would become the bathroom window. This was to be coupled with a cast-iron, high-back, clawfooted tub and 1″ hex mosaic on the floor with 3×6 wall tile laid brick fashion up to 5′. There were objections to this based on family considerations (the HO’s MIL was elderly and didn’t handle bathtubs very well, and Mrs. HO had had one too many Victorian-style bathrooms to want another. So we started over.

The final design called for a 7×9 bathroom with the entry door set into a short wall that cut off the corner of the box at 45 degrees. This helped reduce the visual impact on the large space. Instead of a tub, there would be a large tiled shower, about 3×5. And to prevent this box-within-a-box from creating a claustrophobic atmosphere inside the bathroom, the shower surround would be built of Thin-Line (3″) glass block. Only the walls of the shower would be tiled, and with 4×4’s instead of 3×6’s.

I did get to keep the mosaic floor tile.

Moving the existing floor drain for the pre-planned bathtub to where it had to be for the shower was the first step. After that, I shot the floor heights with a laser level on a 2’x2′ grid to get an idea of how much we’d have to shim or rip the sleepers. We wound up using 2×3’s on edge, Tap-conned and PL Premiumed to the floor as sleepers. From the floor grid photo, you don’t get a complete picture of the height differences. There was over an inch and a half diff from highest to lowest point–and this wasn’t a slope; it was humps and valleys all over the place. Laying the sleepers dead level took two of us three days.

The finish flooring was 2×6 T&G red pine roof decking. This has the advantage of not needing a plywood subfloor–a big advantage considering the price of ply last fall (and still!). It nails in place very nicely with a framing nailer. In the bathroom area we did lay a subfloor of two layers of ply, screwed and PL’ed, to carry the tile. And under the toilet and all partition walls extra sleepers were laid into provide solid support down to the concrete.

Here’s a few pics of the early stages. 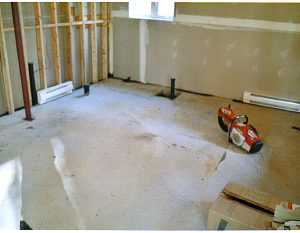 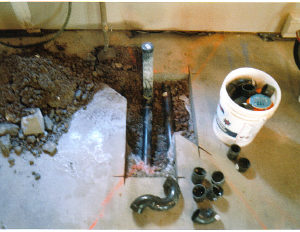 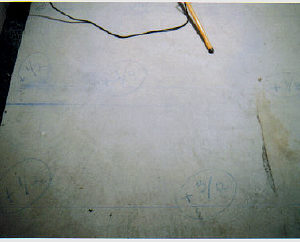 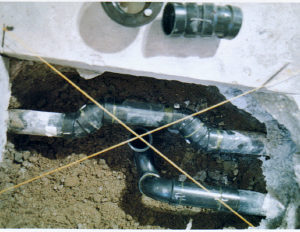 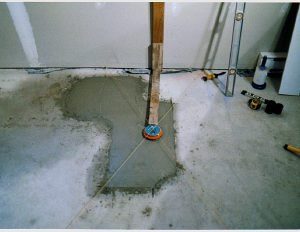 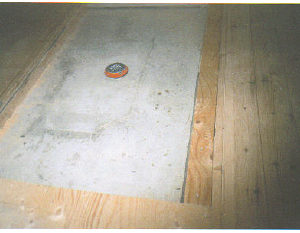 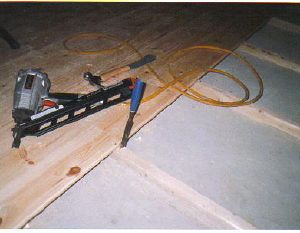 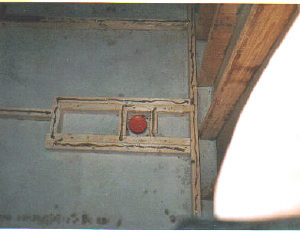 Purchasers of certain models should stop using the saw immediately and contact DeWalt to receive a free repair kit.