Foam insulation below the concrete makes deep footings a thing of the past.

Synopsis: When senior editor Andy Engel decided to build a freestanding garage next to his house, he opted for a frost-protected shallow foundation rather than a conventional slab with footings below frost depth and a stemwall atop the footings. Because the garage would only be heated intermittently, he needed to install rigid foam under the slab as well as extending out from the building. In this article, Engel describes every step of the process, from planning the excavation to pouring the concrete.

Every builder knows that conventional footings must be placed lower than the deepest expected frost depth. My area’s 42-in. frost depth is one reason why slab foundations are rare and basements are common here; if you’re digging that far down anyway, a full basement doesn’t cost that much more. The exception is garages. A slab on grade is about the only economical way to build a floor you can park a truck on. Here in Connecticut, garages are typically built by excavating perimeter trenches to below frost depth, pouring concrete footings, and building concrete or CMU-block stemwalls atop the footings. The stemwalls are backfilled, and the soil inside the garage is compacted (or not, often enough). A layer of gravel is placed, followed by a plastic vapor barrier, and then a 4-in.-thick concrete slab is poured within the stemwalls. Sometimes a layer of foam insulation is placed between the gravel and the plastic.

However, the deep trenches create a fair amount of soil to get rid of, and the stemwall uses a lot of concrete. When I thought about building a garage next to my house, all of this was on my mind. Since I planned to do the work myself, the prospect of laying a block stemwall while stooped over in a trench also affected my thinking. My back resented that kind of abuse even before my hair turned gray. There had to be a better way.

I found an intriguing technique in the IRC known as a frost-protected shallow foundation. The idea behind this technique is that insulating the ground around a building keeps the earth below from freezing and negates the need to build concrete footings below frost depth. How far the foam has to extend depends on the climate zone. For that detail, the IRC references American Society of Civil Engineers (ASCE) document 3201: Design and Construction of Frost-Protected Shallow Foundations.

However, the IRC includes this detail only for heated buildings, where heat leaking from the building keeps the ground below from freezing. My garage would be heated only intermittently, so the code would view it as unheated. But ASCE 3201 provides more details than the IRC, including a way to build frost-protected shallow foundations for unheated buildings. The main difference between the details for a heated building and those for an unheated building is that the latter requires insulation below the slab as well as extending out from the building. Heat rising from the earth’s core keeps the ground below the foam from freezing. Since I had planned to insulate below the slab anyway, the only extra thing I’d have to do would be to extend that 2-in. layer of insulation about 4 ft. beyond the footing area. That seemed like a no-brainer, but I had to get it approved. 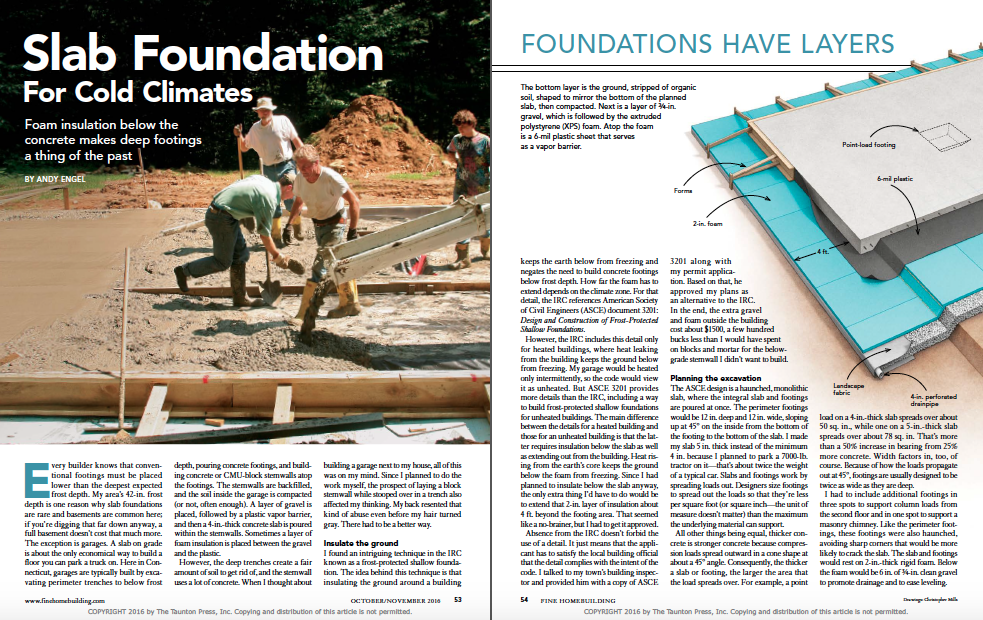 View PDF
Previous: How to Reduce Heat Loss Through Footings Next: Building a Concrete-Free “Slab”-on-Grade Foundation