A Slab-On-Grade Foundation for Cold Climates

Proper drainage (lots of gravel) is the key.

Synopsis: This article describes the construction of a slab-on-grade foundation that is capable of resisting the severe temperatures of northern climates. A thick layer of compacted gravel plus rigid-board insulation are two of the author’s secrets for this low-cost alternative to full basement walls.

The handbooks and structural engineers all say you can’t build a slab foundation in frost country and expect it to say put. But about 15 years ago it occurred to me that interstate highways are nothing more than large concrete slabs poured on the ground. They don’t have frost walls, yet they don’t heave apart. And what about railroad tracks? Why aren’t they twisted like spaghetti come spring? Why couldn’t the principles of roadbed construction be applied to cold-country slab foundations?

Slab-on-grade foundations are an economical alternative to a full, poured-concrete basement. They require minimal excavation and site disturbance, are quickly laid out, and are easily formed and poured. Also, their suitability as thermal mass in passive-solar and radiant-heating systems is almost unequalled. But slab-on-grade foundations can be extremely vulnerable to frost damage.

Clay soils (like those of northern New England) are typically saturated with ground water. When this trapped water freezes, the soil expands. If this expansion were uniform, it would pose no appreciable threat to a slab-on-grade foundation. The entire slab would rise and fall evenly, like a boat on the tide. But the perimeter of a slab is subjected to more frost action than the interior. Because concrete is not elastic, any significant difference in movement between two areas will cause a crack. Although frost walls (poured-concrete walls exending to a footing below the frost line) prevent cold from penetrating under the slab, they require so much extra excavation, formwork and concrete that they offset the savings of building on a slab in the first place.

Frost heave won’t occur, however, if the soil can’t hold water. Roads and rails are laid upon a base of porous and well-drained material that allows water to move rapidly through and away from it. There’s nothing to freeze. With this in mind, I’ve developed a slab-on-grade system that doesn’t need a frost wall for stability. I’ve continued to refine the system with each new project, but so far there hasn’t been any evidence of cracking or movement in any of the half-dozen foundations I’ve done. Several engineers, including the father of my latest client, have reviewed the system. And while they were skeptical at first, they agree that it will work provided the drainage is good and no water occurs in the soil above the frost line.

The budget for Walter Breck’s house in Fletcher, Vermont, was tight. The site had wet, heavy clay soil underlaid with rock — it would have been hard to find a worse place for a basement. Because of this, and because Breck wanted radiant heating, a slab-on-grade foundation made sense.

We brought in a bulldozer to scrape away the topsoil. The site sloped toward the southeast corner, so the bulldozer actually dug a shallow pit that varied in depth from grade level to about 2 1/2 ft. deep on the north side. Otherwise, we would have brought in clean gravel fill and built up a level pad, compacting the gravel in layers. On a slightly sloping or level site this is not difficult, but in this case, it was easier to dig to level. 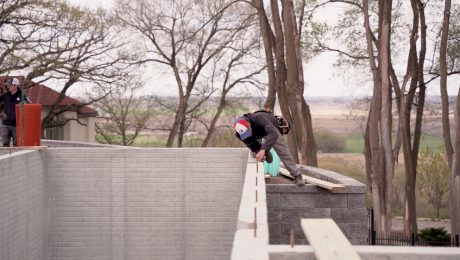 Watch Framer Mark Henrichson transfer the layout from the plans to the new foundation as the crew on FHB House Nebraska preps for floor framing.