Adding a Sunroom With Porch

Low-maintenance materials combine with traditional details in a light-filled addition.

Synopsis: An architect describes how he designed and built a Victorian-style sunroom addition with an open-air porch above using man-made, low-maintenance materials such as PVC railings, vinyl windows and doors, and molded plastic panels and brackets.

I’ve seen too many old homes ruined by inappropriate additions. In some of those cases, it would have been better to tear down the house rather than graft an unsuitable addition to it. I’m not saying an addition has to be a slavish copy of the original. But it must fit. It must add to the original, not just be added to it.

So when I was asked to design a sunroom and porch addition for a classic Victorian in Montreal, the challenge was to make the addition appropriate to the house and useful to the clients. By the time I met Dennis and Suzanne, I was already familiar with their house, which is one of the few examples of late Victorian in the neighborhood. On the back of their house, which faces west and the couple’s lovely garden, a small two-story shed addition had reached the end of its life span. The shed was a light frame structure with single-pane windows and, of course, no insulation. The enclosed lower portion of the addition was used for storage. The upstairs balcony was accessible from the second floor.

Dennis and Suzanne wanted to replace the shed with a Victorian-style sunroom covered with a second-story porch. They wanted a powder room in the addition, a full-height basement beneath it and outside access to the basement, which already was accessible from the main basement. They also wanted the addition to be as maintenance-free as possible.

The design had to suit the house — I decided the sunroom should be designed like a porch, supported by classical columns yet enclosed with large windows and molded panels on three sides. In the center, French doors would open onto a stair leading to the garden.

To prevent obstructions to the view from the addition, we would put the powder room in the corner of the sunroom against the house. To respect the exterior design and the continuity of windows, columns and molded panels, the powder-room partition would intersect the exterior wall between two windows so that it remained invisible from outside.

To help relate the addition to the house, the overhang above the sunroom would be supported by wide brackets, similar to the brackets beneath the cornice returns on the main house. Victorian brackets and moldings also would enhance the design for windows, transoms and second-floor columns.

Finally, transoms above the windows and French doors — each topped by a molded panel — would create the illusion of height necessary to match the existing house and to keep all openings in proportion. 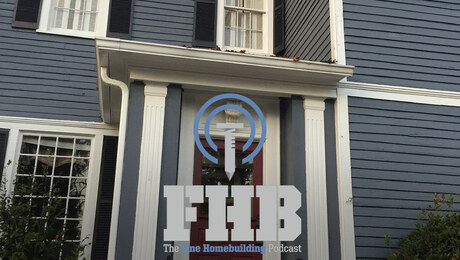 View All
View All Windows Articles
Shop the Store