How big is a square foot?

An architect describes his way of making a realistic estimate about the cost of a home, no matter how big

I am a residential architect, and almost every potential client that walks in the door wants to know the answer to one question: “How much per square foot does it cost to build around here?”

For many years I had used a casual, commonly accepted number. Then about 15 years ago, after a spate of inflation, I realized I was off by about 25%, so I set out to get more scientific about tracking how much our houses cost.

As I tried to make our pricing information more accurate, it became apparent I needed to have a systematic way to compare buildings with different components in order to get a universal kind of measurement for square footage. Unfortunately, having this universal square-foot number doesn’t by itself solve problems when talking to clients because they have run into many different descriptions of square feet—with no disclaimers attached.

Generally, people selling houses want them to seem big, so a 25-ft. by 40-ft. screened porch might well be counted as 1,000 sq. ft. of living space in the real-estate agent’s description. On the other hand, when someone has been told that it will cost $100 per sq. ft. to build a house, they want the number of square feet to be as small as possible so that the estimated cost is less—and then they multiply only by the interior “heated” square footage and get that screened porch for free.

Of course, reality lies somewhere in between. The screened porch isn’t free, but it doesn’t cost as much as heated finished space. To arrive at a universal square foot that we can use to compare costs, we have developed a series of fractional multipliers that we use to get what we call “factored square feet.”

We start with the gross heated square feet. This is a reasonably accepted industry standard, including the floor area measured to the outside of the rough walls. We get this information for all finished floors and total it separately because this number by itself has other uses—for solar calculations, bank appraisals, real-estate questions, etc. This number is the total gross heated space, and it is definitely what a lot of people think of as a home’s square footage—but it is actually just the beginning.

Two-story spaces, we calculate and multiply by 0.5. It is an industry standard that cathedral ceilings are 1.5 times spaces with flat ceilings. (Remember, we have already gotten the basic floor space in our gross heated space, so this 0.5 is in addition to that amount.)

Does it really increase the cost of a room 50% to have a cathedral ceiling? If that ceiling has open beams and lots of skylights and balconies overlooking it, it may be more. If it is simply a cathedral ceiling, probably not—but this is an empirical way of comparing buildings, so some simplification is required. In my experience, making fine adjustments to these multipliers is not wise because it implies a level of precision that this methodology doesn’t have. This is good for a first look until you get enough detail to cost it out stick by stick.

What about other spaces?

Full basements: We usually add 10% for full basements. Why not more? In Maine, where I live, frost walls are probably 5 ft. deep anyway, and we always put a “rat slab” in the crawlspace, so going to 8 ft. doesn’t add that much. Multiplier: 0.10.

Attics: If this is an unfinished space under the roof eaves with only a plywood subfloor, we usually estimate them at 20%. If it is a trussed space, we see it as part of the roof and add nothing. Incidentally, I usually don’t count space behind kneewalls that are less than 4 ft. high, so adding 20% for a real attic (which is probably more than it costs) tends to compensate for throwing away that square footage. Multiplier: 0.20.

Insulated garage: We think this kind of space is about 40% of the cost of heated house space. An insulated garage usually has a good deal of mechanical stuff-good windows, expensive doors, a shop workbench, maybe a staircase up to a second floor “attic”—but they are inherently simple spaces. Multiplier: 0.40.

Uninsulated or “raw” garage: We usually calculate the square footage at 30% because there are fewer expenses. Multiplier: 0.30.

Covered decks, screened porches and roof decks over inhabited spaces: We take them at 40% because they involve lots of expensive finishes and detailing. Multiplier: 0.40.

Open wood decks: We figure these decks at 20%. We find that a deck with pressure-treated framing and a western red-cedar surface, some stairs, railings and built-in seating goes for around $20 per sq. ft., which is about 20% of heated space at $100 per sq. ft. But what if the house is a luxury model at $200 a foot—the deck wouldn’t increase to $40 per sq. ft., would it? True, but with that kind of luxury home, the deck probably will be made of an exotic wood or be a granite patio with granite sidewalls that easily costs $40 per sq. ft. If it really hasn’t escalated in character, then reduce the multiplier—but don’t say I didn’t warn you.

The point of this is that the multipliers should reflect the kinds of buildings that you build so that the “factored square foot number” that you come up with for your buildings will allow you to compare dissimilar buildings.

When we develop a square-foot sheet for a house that is at all atypical, we often will adjust the multipliers to be what we believe is a more accurate reflection of this particular building—but they rarely change more than 10% up or down. The important thing is to go through the exercise and to realize this is a first look at a building—before you really have enough information to “cost it out.”

Our clients often want to play with these estimated numbers. I resist letting them do this because the only way they get massaged is downward so that the building will seem less expensive. If a 1,000-sq. ft. two-story space is multiplied by 0.5, it adds 500 “factored square feet” to the proposed home’s square footage. When that figure is multiplied by a cost of $100 per sq. ft., it amounts to $50,000.

Surely it can’t add this much to the cost, you say, and it probably doesn’t. But other areas of the home might add more, and if we reduce only the areas that seem too high, we will end up with an overly optimistic estimate. For example, many clients want high ceilings on the first floor. I don’t use a multiplier for a 9-ft. ceiling. But that higher ceiling the clients desire might allow for some clerestory windows, so the excessive pessimism of the multiplier for the two-story space eventually gets balanced out. (Remember that this step is a quick first look that enables us to compare the relative costs of different designs and should not be mistaken for a real estimate.)

The bottom line is, when we resist our clients’ efforts to massage this spreadsheet, it has proved to be a pretty good predictor of building costs.

When I do a schematic design for a new house, I simply plug the base square footage and the factored numbers into a worksheet on the computer, grit my teeth and look at the number the program generates. We give that number to our clients along with the schematic design, and reality starts to get injected into the often overheated conceptual stage of design.

Use this information to create your own spreadsheet. You can even create a simple database of your past jobs that will give you some empirical ammunition to use when you tell your customers why things cost what they do. 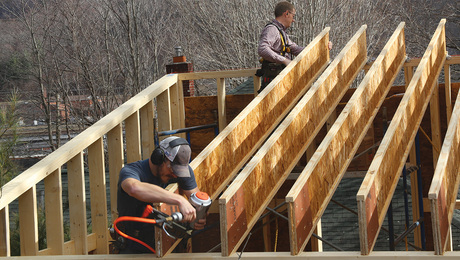