Available as single-shot, semiautomatic or full automatic, these low-velocity tools are the ones carpenters choose when driving fasteners into concrete or steel.

Synopsis: This survey explains the operation of powder-actuated tools, which are used to fire special fasteners into extremely hard and dense materials, such as concrete or steel. Powder loads, fasteners, and safety tips are covered.

The crackling of small-arms fire and the smell of gunpowder are something that many people might expect at the local firing range, not on the job site. But if you’re a carpenter, you know that shooting fasteners into concrete goes much faster than just hammering them in by brute force.

Powder-actuated tools, also known as PATs, were first developed in the early 1920s by British marine engineer Robert Temple. Resembling a firearm, the gunpowder-driven Temple Driver tacked temporary steel patches to leaky ships. But it wasn’t until the late 1940s that PATs (often called “stud guns”) were unveiled to the construction industry. Turns out few building trades could resist a tool that pops a fastener into concrete or steel at the squeeze of a trigger.

Electrical contractors also use PATs to mount boxes and conduit. Mechanical contractors use them to hang ductwork and fire-protection sprinkler systems. Roofers use them for securing rubber roof membranes, and steel erectors depend on them for installing decking, grating and more.

Here’s a look at PATs, fasteners and powder loads, plus a thumbnail review of the most popular PATs used by carpenters. The sidebar tells where to find more information on the safe, efficient use of PATs.

Powder-actuated tools are trigger- or impact-activated and detonate gunpowder-packed loads to drive fasteners into concrete or steel. To help prevent accidental discharge, the tools fire only when their spring-loaded muzzles are fully compressed against a hard surface.

Early PATs were direct-acting, high-velocity tools, which meant that the gunpowder’s explosive force acted directly on fasteners to propel them at high average test velocities of more than 492 ft. per sec. High-speed fasteners that happened to pass entirely through a substrate or that ricocheted could be hazardous or even lethal to operators or bystanders.

On the other hand, almost all modern PATs are indirect-acting low-velocity tools. They add a piston between the load and the fastener. The piston delivers a powerful blow to the fastener head while reducing the ultimate fastener speed to a much safer average test velocity of less than 328 ft. per sec. — sufficient for fastening into most concrete and structural steel.

Some Hilti semi-automatics and all Hilti automatics accept an optional magazine that holds ten collated fasteners to eliminate the need to handle single fasteners (more on specific models later). 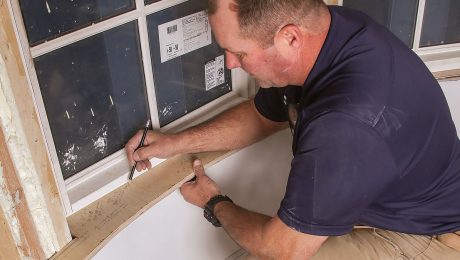 What Is "Good Enough" Trim Carpentry?

A veteran carpenter considers how to measure the quality of finish-carpentry work without a building inspector to pass judgement.