Can I make ungrounded circuits safer?

I’m remodeling an early 1960s house. None of the old wiring has a ground wire, and all the plugs are two-prong. The new circuits in the remodeled areas are grounded, but rewiring the old outlets is pretty complicated due to the interior finishes and limited access to the attic and basement. Is there any way to ground the old circuits?

Marc Massa, master electrician and owner of Stony Lane Electric in Exeter, Rhode Island, replies: Rewiring could get expensive and messy fast because you have to cut holes in the finished walls to snake new wires. You can, however, get groundfault protection by installing a GFCI (ground-fault circuit interrupter) device to protect each circuit. This will allow you to install grounded outlets downstream of the GFCI device, eliminating the need for your client to use adapters.

Locating the first outlet can be tricky. It’s likely that the circuit feeds are routed through light fixtures before branching to outlets, which was common when the house was built, so replacing the breakers will be simpler. Still, I prefer to replace the outlet rather than the breaker because GFCI breakers tend to be more sensitive than GFCI outlets. Clients don’t mind resetting an outlet in the next room but will be cursing you every time they have to run to the panel in the basement to reset the breaker (even though it just may have saved a life).

The NEC 2005 allows this alteration to existing electrical systems [406.3(d)(3)(c)] but requires that each two-prong outlet that has been changed out to a grounded outlet be labeled as “GFI protected. No equipment ground.” I print up stickers on my label maker to mark outlets neatly.

This technique works because of the way GFCIs function. In the event that the GFCI senses a current difference between the hot and neutral conductors passing through it, the GFCI will open the circuit and stop the flow of power.

The difference occurs when current leaks to ground, as in the case where you reach for the kitchen faucet while popping bread into a toaster. As soon as the slightest current flows through your body from the toaster to the faucet (grounded by virtue of its connection to copper water pipes), the GFCI will pop because it notices that the hot wire is carrying more current than is returning through the neutral wire connected to the device.

Although the technique of installing GFCI devices in an ungrounded circuit doesn’t ground the circuit, it does provide protection in the event that any electricity leaks to ground, thereby preventing electrical shocks and injury. 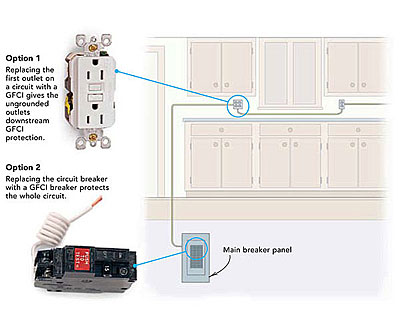 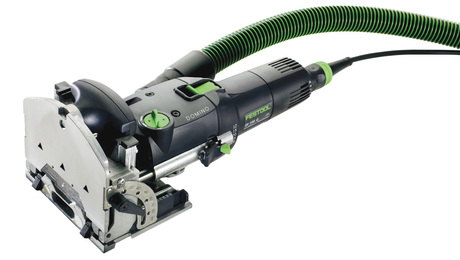 Festool's Domino: Worth the Dough?

The hefty pricetag of this small power tool is justified by its utility.