The Many Faces of Prefab - Fine Homebuilding
Main Menu
Subscribe

The Many Faces of Prefab 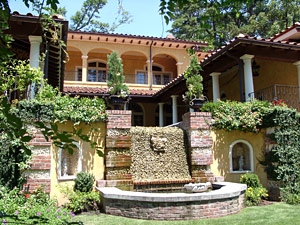 I used to think there was only one way to build a house: A truck pulls up and unloads a pile of lumber and then carpenters show up and start building—a process that, I know from experience, can drag on for months.

Then a few years ago, a friend invited me to watch a crew “set” her new modular house. I arrived that morning to an empty lot. By afternoon, the shell of the house was almost complete. The next day the house was “buttoned up” weather tight, avoiding the moisture damage that I’d dealt with on my own home construction.

Since then I’ve had the opportunity to see other types of prefab houses going up. I’m always impressed by the accuracy of the construction, the speed with which it goes up, and the minimal waste, especially compared with ordinary construction. I’ve also learned that prefab means much more than modular. Although modular— which are whole truck-size sections built in a factory and shipped to a building site (you’ve seen them on the highway) —is a proportionally small percentage in relation to overall construction, other kinds of prefabrication are used in a large number of homes built today.

The Short History of Prefab

After seeking out other forms of prefab house construction, I started researching prefab systems to understand the varieties and their differences. There remains much confusion over the term “prefab” and its larger family of “building systems,” which refer to all types of construction manufactured and assembled partially or entirely in a factory, plant, or yard.

As a concept, prefabrication isn’t new. Factory-built houses in the United States date back to the catalog houses of the early 1900s. These houses gave a working family the opportunity to own a home at a reasonable cost, which was made possible by the mass construction of parts and bulk purchasing by the factories. Mail-order kit houses with all of the parts required to build the house were sold by companies such as Alladin Homes, Montgomery Ward, Bennett Homes, and Sears Roebuck and Company. The parts were produced in factories and shipped to the site, where the house was assembled by the homeowners or local builders. Most of the houses were labeled “bungalows,” although they came in a variety of styles. Options such as paint color, type of wood trim, and door and cabinet design were selected in advance. Add-ons, such as porches and freestanding garages, were available for an extra fee.

Architects in the early 20th century, including such visionaries as Buckminster Fuller and Frank Lloyd Wright, began to experiment with prefabricated design. Although there was some public interest, people generally thought these houses looked boxy and odd. But by the 195 0s, the prefab home industry had found its footing and began to focus on low-cost small houses rather than great design. It has only been in the last decade or two that architects, builders, and homeowners have begun to take advantage of what is called, in the industry, systems-built homes. Along the way, good design has crept back into the process. As you’ll see in the pages to come, prefab is now much more than small and affordable.

Getting Bigger, Better, and More Custom

With demand increasing for customized designs, architects along with the industry are pushing the limits of what the public traditionally recognizes as prefab. They’ve also begun developing entirely new prefab systems and combining existing ones in interesting new ways. For the first time, prefab houses are available that have custom floor plans, style, and rich detail—benefits not previously associated with prefab construction.

Homeowners seeking upscale homes are finding architects and manufacturers who will give them just what they want. Manufacturers now offer options, customize their stock house plans, and work closely with architects to expand their prefab designs.

In the past, builders were concerned about prefab’s quality but generally were unfamiliar with the process. Once they realized it was fairly simple to transition from standard construction to prefab, more have explored the benefits of prefab construction.

The most commonly used building systems are modular, panelized, log, timber frame, concrete, and steel frame. I include each system here, all of which are recognized by residential building codes. Structures such as manufactured homes or trailers, although they serve a purpose, are covered by a separate U.S. Department of Housing and Urban Development (HUD) code and are not included in this book.

Modular houses arrive on site the most complete of all prefab systems. Boxes, or modules, are engineered and assembled in a factory and shipped on trucks. Houses can be built with one module or dozens, in virtually any style. Built to endure the stresses of highway travel and being lifted with a crane, modulars contain up to 30 percent more building material than a comparable site-built home. When the drywall is hung, it is often glued as well as screwed to the wall studs.

This is a fast-growing business. The number of modular houses has nearly doubled in the last 10 years to approximately 206 ,000 in 2004 , according to an industry report. In the last decade, a growing percentage of modular houses were custom designed, which makes them quite different from the modest homes that dominated the industry in its early days. And these custom-built modular houses are popping up in the most affluent areas.

Probably the most widely used type of prefab is panelized construction. According to a study reported by Automated Builder magazine, panelized construction made up roughly 44 percent of single-family homes. For the study, panels included wood panels built with 2×4 lumber (in essence, traditionally framed wall, floor, and roof segments) and structural insulated panels (SIPs), which are sandwiches of foam insulation between two layers of plywood or similar sheet material. These panels are shipped to home sites where they are assembled like large three- dimensional puzzles.

Both types of panels are used to build entire houses and as infill for other systems such as timber frames or steel frames. To simplify the building
process and cut down on construction time and labor, builders on site also use panelized components like floor, wall, ceiling, and roof trusses.

Log homes have come a long way from the one-room cabin days. Modern log houses are larger and better built, and most are built in a factory or “yard” and then assembled on site. Modern handling and cutting machinery make it more efficient to fabricate log homes in a factory setting. Today there are as many as 5 00 log-home manufacturers, accounting for an estimated 7 percent of custom home building.

In the mid 198 0s, about 15 ,000 log homes were sold each year; today that figure has swelled to 26 ,000. Ten percent of the log homes are handcrafted, which means that logs are hewn and notched by hand. The other 90 percent use milled logs.

For homeowners, both the log-home tradition and the beauty of wood are the primary allure. A secondary advantage is that the wood’s thickness and density, or thermal mass, make them energy efficient.

Timber-frame owners appreciate the traditional richness of the exposed beams and posts and the high, soaring ceilings, which are often features of timber-frame homes. Timber frames qualify as prefabricated because today most are built in a factory. Many are fabricated using sophisticated computer measuring and cutting equipment under controlled conditions.

According to the Timber Frame Business Council, more than 200 timber-frame companies do business in North America. To get a sense of its popularity, two national magazines are devoted to the topic, and about 12 annual timber frame and log shows are held each year.

Unlike in Europe, where concrete homes have been built for hundreds of years, concrete has rarely been used for residential construction in this country. In 1993 approximately 3 percent of the homes built in the United States used prefab concrete panels; today approximately 16 percent are built using some type of prefab concrete system.

Although concrete has typically been a more costly method of building, its popularity is growing because it is plentiful, easy to create in a variety of colors and in a multitude of forms, is virtually weatherproof and bugproof, and when reinforced with steel is strong enough to stand up to hurricanes, tornados, and earthquakes. In addition to all those benefits, concrete can be a very energy-efficient material for home construction.

Metal is one of the most recyclable building materials; it offers stability against hurricanes, earthquakes, and fire; and it eliminates concerns regarding termites and other pests. Steel is a practical alternative to wood because of its stability and longevity.

One reason steel frames have not been used for houses in the past has been in finding builders who can build with it. Today more and more companies in North America prefabricate the framing components for houses and can recommend qualified builders to erect them.

Many houses included in this book are hybrids, meaning that one house includes several different types of prefab construction. One house was built with a log “stack” and a timber frame with a panelized system infill. Another was built with a unique steel frame and infilled with SIPs. Advanced technology now being employed in factories has vastly expanded design and construction possibilities. 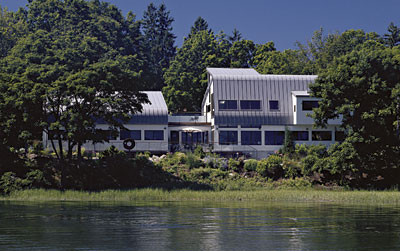 Sheri Koones is a columnist and author who writes a regular column for Home Resource and Design Magazine.