Houses that roll with the punches

A Japanese company takes a new approach to earthquake-proof homes

The Japanese know earthquakes. In July 2003, a series of intense earthquakes destroyed more than 1000 houses in northern Japan and damaged more than 10,000. But some houses suffered no damage at all. “As the tremor grew larger, I felt the house move slowly,”one homeowner told representatives of Ichijo, a Japanese home-building company, after the quake. “I was surprised to see my husband outside because he was staggering so much that he needed to hang on to something.” That’s when she realized the magnitude of the earthquake. This woman’s husband made it into the house safely, and their house was nearly  undisturbed. In fact, a flower vase didn’t even topple from their Buddhist altar. Apparently, the Japanese know seismic isolation, too.

The sliding plates carry the load of the house under normal conditions and allow it to move relative to the earth during earthquakes. The rubber bearings pull the house back to its original position after it has slid. The result is a house that basically stands still while the earth below shakes and quakes. Ichijo’s base-isolation houses were given blanket approval by Japan’s construction minister in 2000; two years later, the approval was upgraded for houses on “soft ground” (such as sand, peat, and silt).

Ichijo has sold more than 1800 seismic-isolation houses in Japan and has installed the system on some buildings in the United States: The city halls of San Francisco and Oakland, Calif., both are outfitted with the system, as is the University of Southern California’s Leavey Library. The maintenance-free system is warranted for 60 years and adds about $20,000 to the cost of a two-story, 1200-sq.-ft. house (which sells for roughly $400,000 in Japan). To test the system, engineers built fullscale wood-frame houses on a platform that was capable of producing high-intensity seismic waves. After the platforms were shocked with 300 seismic waves, the houses were inspected for damage. Wineglasses typically didn’t fall off the dining tables in the isolated houses, but the dishes came crashing out of the kitchen cabinets in the nonisolated houses (see photos).

Go to www.ichijo.co.jp/technology/menshin/ichijo_mensin.shtml to see some fun video of the test houses. The site is written in Japanese, so just scroll down and look for the video players.

Earthquake testing in the lab

Engineers at Hazama Technical Research Institute in Tsukuba City, Japan, built full-scale model houses and then shocked them with 300 earthquake- intensity seismic waves. The effects were monitored visually and electronically. 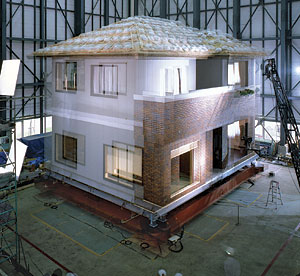