I enjoyed Betsy Pettit’s article ”Remodeling for Energy Efficiency” (FHB #194) and heard echoes of my own philosophies on old-house remodeling.

I spent many years as a construction manager in a large remodeling firm that worked mostly on large, expensive projects that many times ended up nearly doubling square footage with almost no focus on the condition of the existing home. The result was always the same and included worn-out, inefficient HVAC systems, galvanized piping, nonexistent insulation, and inoperable windows. These issues were hardly ever addressed up front, and once construction began, it became my responsibility either to deal with building a new structure onto an old, inoperable one or to deflate the homeowners with change orders.

Now that I am on my own, I address the fundamental core of homes that I am estimating before adding on a $100,000 kitchen or master suite so that the owners are fully aware of the issues and understand the long-term performance and maintenance of the completed home. I can add less square footage and still create a comfortable, affordable home that will be trouble-free for many years to come. And the only change orders are the ones that the owners initiate.

As energy costs inevitably rise and the burbs creep out even farther, I believe that Americans will embrace a more-sensible, long-term approach to remodeling. Let’s call it “responsible remodeling.”

I would like to comment on the story in “Cross Section” about ASHRAE’s ventilation standard being too low (FHB #194). We don’t need more ventilation to “dilute formaldehyde from building materials.” We need to get rid of cancer-causing formaldehyde from all building materials. My company designs and builds houses with no plywood, no particleboard, no OSB, no wood I-beams, and no factory cabinets. The home-building industry needs to confront the ugly secret that underneath the granite countertops and beautiful veneers is a house soaked in poison. If we don’t, the government will do it for us.

I want to tip my hat to Gary Striegler’s block-plane roundup (FHB #194). Comparing the $10 Stanley with the $150 Lie-Nielsen was bold, but right on the money. Until now, I was almost embarrassed to pull out my stamped-metal secret weapon.

But I think one more plane deserves mention: the Lie-Nielsen 60-1/2 Rabbet Block Plane (www.lienielsen.com). It’s a tool worthy of fine woodworking, but after a few weeks, it has moved from my workshop straight into my toolbox. Having the ability to plane right up to an edge can be a real advantage when I’m cleaning up notched rails or posts for deck- or fence-building. I can plane cedar all day without resharpening. I still rely on my less-expensive Stanleys for everyday work, but for some jobs, this plane’s attributes justify the price ($150). It’s one that other woodworking-minded carpenters might want to check out.

As a Canadian general contractor now living and building in Palm Springs, Calif., I learned that insulating older houses can have undesirable consequences (“Remodeling for Energy Efficiency,” FHB #194). For example, 60-year-old or older (preconcrete) foundations were often made of stone and cement. We called it “rubblecrete.” Good and solid for years until someone came along and fixed it. Adding moisture barriers inside or out changes everything, and some of those old foundations began to crumble after seasonal moisture content was changed.

Another surprise was frost penetration. Insulate the foundation wall, and it stops losing heat to the ground around it. Presto, deeper frost penetration to the extent that the footings get broken.

Here in the desert, I don’t have to worry about frost, just crayons melting in the garage.

Author Betsy Pettit replies: I know a great deal about Canada. My husband and partners are from there and won’t let me forget it. But as surprising as it might seem to Canadians, we also get winter in New England, so we also know a bit about old foundations, water movement, and frost heave.

The way to avoid frost damage is to control the water content of the soil around the foundation. If the ground does not get saturated beside the exterior foundation wall, there is no problem. On the homes featured in my article, we sloped the ground away from the foundation everywhere around the perimeter and used impermeable layers adjacent to the building to prevent ground-water from penetrating the surface. Second, frost heave occurs in the direction of heat loss. The key is never having your basement colder than the ground. Unheated basements heave inward, but heated ones do not, regardless of the amount of insulation.

In terms of moisture barriers leading to the deterioration of old foundation walls, the key is either to keep things dry or to keep things wet. You have to pick one. It is the seasonal transitions between wet and dry that cause salts to move, and it is the salts that cause the most damage to foundation mortars (or bricks, if there are any). On our foundations, foam insulation or a membrane lining on the inside prevents interior drying. No evaporation, and no more movement of moisture and salt to replace the moisture that had evaporated. If moisture can’t leave, moisture can’t come in. Mortars don’t mind being wet. In fact, concrete is happy being wet. It is the drying that hurts it.

In the “Tools & Materials” section of your February/March issue (FHB #193), Jan Carr reviews a Craftsman miter saw and concludes by saying it would be the tool of choice for a simple shoe-molding job. May I suggest a tool I use that is even simpler and cheaper, but just as effective? It’s the handheld Miter Shears from Lee Valley Tools (www.leevalley.com).

Sewage ejectors should have an alarm system

I read with interest Mike Guertin’s article “Plumbing a Basement Bathroom” (FHB #193). As someone who has lived with a whole-house sewage-ejector pump system for nearly 20 years, I have a few additional comments.

First, the installation shown in the article does not appear to have an alarm system to alert the homeowner of pump failure. Such systems are relatively cheap and easy to install and should be powered from an electrical circuit different from the pump’s because pump failure can cause or be caused by a tripped circuit breaker. An alarm with a battery backup is even better because with a power outage, it is easy to forget that although the water still runs, the sewage-ejector pump does not.

Second, the tank (also commonly referred to as the “crock”) should be properly sized. The temptation is to put in the smallest tank possible, especially in a retrofit as in the article. In fact, you should put in the largest tank practicable. The worst-case scenario is a tank that is undersize and causes the pump motor to burn out because it never gets past the startup phase. A larger crock means the pump cycles less often, runs more efficiently, and will last much longer. In addition, a larger crock will provide a larger margin of error in the inevitable event of pump failure.

Third, the tank cover should have a sealable hatch to allow easy access to the interior of the tank. Many of the most-common causes of pump failure can be cured with a flashlight and a length of conduit with a short hook. Floats fouled by floating debris or lodged between pipes and tank walls can be quickly freed in this way.

Author Mike Guertin replies: All great recommendations. I would add that the alarm system needs semiannual testing at a minimum to ensure that it will operate should the tank level rise above the set point. Idle alarms can fall silent if not operated from time to time.

Passive houses save 80% to 90% of space-conditioning energy. It is hard to believe, but it is true.

I liked your piece on pulling stubborn nails in “Building Skills” (FHB #193). But here’s a tip you missed. Where the nail has pulled through the board that it attached and is standing proud, I give the nail one or two firm blows with the hammer first before trying to pull the nail. The short travel on the nail breaks the bond with the wood caused by rust, texture, or glue, and allows the nail to come out easily when pulled. This works especially well after you have already broken off the head and before trying the side-levering technique to get purchase on the now headless nail. 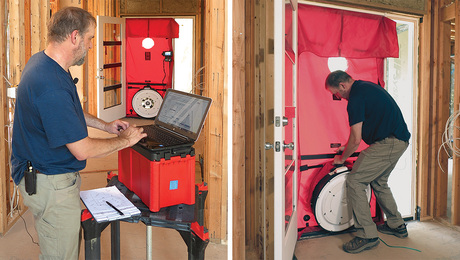 Why You Need Blower-Door Testing