Why I Hate Zoning Regulations

Or more specifically, why I hate American zoning regulations.

I hate American zoning regulations because they make it illegal for me to work next door to where I live. They also limit what I can design as an architect, how it looks and where it can go. And the problem is hardly limited to suburban Washington, D.C., where I work. All over the country, the patchwork of regulations that has resulted from decades of amendments and overlays is doing more harm than good. Zoning regulations that began in response to health and safety issues during the Industrial Revolution have become a catchall for every sort of specialized concern from traffic management to aesthetic conformity.

I don’t like what zoning regulations are doing to our land and to our environment. As more and more Americans have pursued the dream of house, yard and car, our communities have spread out, consuming more and more land and requiring more and more roads. No single word regarding land use terrifies the general populace more than “density” (although “traffic” comes in a close second). If density is bad, the argument goes, then more density is worse. Although the argument fails to explain the fear of density, it seems to stem from our midcentury abandonment of the American city.

The opposite of density, however, is sprawl: a smaller number of houses consuming more land, demanding more roads and producing more traffic traveling over greater distances. Perhaps if commuters understood that the hour they spend in the car going to and from work every day is the equivalent of spending six workweeks in their cars every year, they would rethink the joys of sprawl.

By simply using zoning regulations to increase density (decreasing lot size per house), we could shorten commuting distances, create less pollution and consume less land and less energy. While virtually every land planner knows this to be true, the political nature of the zoning process makes it tough to accomplish. Too often, zoning decisions result from input by remarkably vocal and frequently unsophisticated developers, politicians and landowners. Consequently, sprawl goes unchecked, and every year, more land is given over to a landscape littered with houses and roads.

I don’t like what our zoning regulations do to society. In equalizing lot size in any given residential zone, zoning regulations determine the size of the house to be built, its cost and the owners’ income, segregating our society in the process. Our system essentially requires aging couples to leave the community in which they have raised their children in order to downsize their housing as their retirement approaches.

I don’t like what zoning does to our days and to our families. I don’t like the fact that we must leave our homes to go to work. With the number of two-worker families on the rise, the result is less parental involvement in children’s lives and communities empty of adults during the day.

By separating living and working through zoning regulations, we go entirely against the current trend of telecommuting and home offices. Even zoning laws permitting home offices severely limit the number of employees allowed in the office. Again, it’s all about traffic. But does a small office of four people generate more traffic than an active family driving to soccer practices and Girl Scout meetings, or even several teenagers with driving privileges? Furthermore, employees who are commuting to home offices likely are cross-town or reverse commuting, therefore reducing the burden on busy in-and-out commuter routes.

Many jurisdictions now are struggling to find a way to deal with home-office issues, and the answer is not to develop Byzantine restrictions on trips per day or number of deliveries allowed. The solution is to allow more and restrict less. We are not talking about tanneries here, and the general population (including many of my clients) is going to work at home anyway. It’s a movement. It’s not going away, and patchwork zoning regulations will have no effect. While we’re at it, why can’t we create communities that include single people, childless couples or retirees by allowing for a diversity of house sizes through the creation of smaller lots or accessory buildings on existing lots?

Many regulations are poorly written

Poorly conceived or written regulations often have unintended results. In one local jurisdiction, an attempt to limit accessorybuilding sites ended up prohibiting swimming pools. By increasing setbacks for buildings over a certain length, the zoning regulation inadvertently snared swimming pools in the category of accessory buildings. With a single inept move, thousands of single-family lots in an affluent community effectively were prevented from having a swimming pool. When this problem was brought to the attention of the local zoning officials, they replied that it would take county and council approval to revise the unintentional flaw.

In another imprecise zoning regulation, measuring building height to a midpoint between the eave and the ridge would perversely allow a 70-ft. tall pyramid in a zone with 35-ft. height limits.

As communities seek more and more involvement in their planning and design issues, zoning laws are being overlaid with attempts to limit the bulk, the height or even the design of the new structures that are being built. Ironically, many of these new zoning regulations are written in a way that would have prevented the construction of many of the much-admired historic houses that already exist in the same community.

I’d like to see current zoning regulations completely replaced with very general restrictions that are flexible enough to allow for a variety of solutions to any program and site. Limit the bulk by relating building area to lot size (as most commercial zones do), not by arcane formulas for number of stories, measuring points and so on. Limit height with a simple overall dimension, not with averages. Simply put (and it should be simple), let the lot size determine the house size, and let the house size determine the program (whether there can be an apartment or a home office in the building, for instance).

So what’s the answer?

It’s perfectly appropriate for communities to want to control growth and protect the environment, but the current trend of tightening controls through band-aid legislation is the wrong way to go. Instead, we need to overhaul the entire system. We need to examine what kinds of communities we really want, which means acknowledging who we really are.

We are a people of great ethnic, economic, age and cultural diversity. We need to build new communities that acknowledge this fact, and we need to transform the old ones as well. We need neighborhoods that create a real sense of community by encouraging walking or biking over driving, by allowing for a mix of living and working situations, by integrating diverse incomes and age groups, and by allowing for a richer range of architectural expression.

Every year, millions of Americans travel to Colonial Williamsburg in Virginia and to other similar places, wishing for a taste of what life was like in colonial times. The lively mixed-use streetscape where the blacksmith’s shop sits next to an upscale house, the variety of building types (shops, houses, barns and sheds), and the engaging mix of formal and informal architecture appeal to us. And yet the most that we seem to learn from the place is what colors colonists painted their houses. We didn’t start out boring; it took a while to get there. Zoning regulations had a lot to do with it.

Mark McInturff is an architect in Bethesda, Maryland. 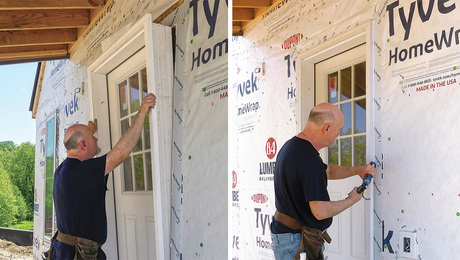