Although I don’t necessarily disagree with the main point of the essay “Why Architects Should Sell House Plans”(FHB #147, pp. 6, 8, 10), Sarah Susanka does some building-designer bashing on her way to that point that is inappropriate and uninformed.

Ms. Susanka characterizes building designers as people “… who create relatively simple sets of plans tailored to the needs of the builder for construction purposes; the plans then are minimally tweaked to meet the homebuyers’ wishes.” This is a sweeping generality that she has no business foisting off on building designers, like myself, who do not do that kind of cookie-cutter design work.

Yes, there are building designers who do minimal plans mainly for builders. There are also architects who do the same thing.

Many building designers do exactly what Ms. Susanka says architects do, namely, “… work for an extended period of time with a client to develop a personally tailored design.” At this point, I have on the boards in my office projects that have been actively in progress since the turn of the millennium. I can assure you that the plans generated are custom and are not of the sort that Ms. Susanka attributes to building designers.

Ms. Susanka goes on to say that architects today should emulate the “architects” Frank Lloyd Wright and Gustav Stickley. Yes, they should, but it should be made clear that neither of these men was, by modern definition, an architect. Both were building designers.

I suggest Ms. Susanka learn about the American Institute of Building Design (AIBD; 800-366-2423; www.aibd.org). In spite of what she may have learned in school, neither talent nor competence can be taught in a class; nor can they be legislated as a result of architects’ lobbying efforts.

Good designers are good designers whether they are registered architects, members of the AIA (American Institute of Architects), members of AIBD or just renegades who refuse to belong to any group.

Sarah Susanka replies: Of course, you’re right. It’s not the label that counts, but the quality of the work. There are brilliant building designers who have had little formal training, and there are architects that one would be well advised to steer clear of despite years of education. But these are at the outer extremes of the bell curve. Anyone who does proper research before hiring someone to help them will discover this.

What the general public doesn’t understand is the amount of training required to be called an architect. Five to six years of intense schooling in architecture, followed by a minimum of three years’ apprenticeship under the watchful eye of a registered architect, are required before you can complete the registration exams. The exams themselves are extremely challenging, equivalent to bar exams for attorneys.

Although it’s not a guarantee that someone who has gone through such training will be an excellent designer, the chances are substantially higher than for someone with no architectural design training. Just like a doctor or a lawyer, an architect is a licensed professional. Those who list AIA after their name indicate that they are also members of the professional association representing architects in this country.

A member of the AIBD who qualifies as a building designer does not have formal educational requirements, but must have been engaged in building design for at least four years. Two years of related education can be substituted for an equal amount of experience. So the category of building designer includes everyone from individuals who have little or no education and only a small amount of work experience through those who have completed the full requirements for qualifying as an architect but who haven’t yet passed the exams. Obviously, there’s a wide range of abilities in this category.

In the end, there’s room for all of us, but some markets are dramatically underserved. I’m hoping that those of us who offer more tailored residential architecture and design services can work together to provide the services and products that that underserved market clearly wants.

Sarah Susanka’s essay “Why Architects Should Sell House Plans” (FHB #147, pp. 6, 8, 10) makes brief reference to “supermarket” plans, but doesn’t go into detail. Typically, you order a plan book (or now visit a Web site) and select a floor plan that you like. You then can order sets of drawings (or even “original” reproducible sets that allow you to run as many sets of blueprints as you want) to submit for a building permit and give to contractors for bidding.

Our engineering firm has dealt with many sets of packaged, or “canned,” plans. As with anything else, the quality of packaged plans varies greatly—probably according to price. But the following scenario is becoming too common: The owners have a parcel they want to build on. They find a floor plan that seems to fit their needs for space, room layout, orientation of view windows, access from their existing driveway to the garage, etc. They spend several hundred dollars on plans and waltz into the building department expecting to get a permit. The building inspector reviews the plans, which always seem to come from out of state, and notes on the correction sheet for plans: “Need complete structural analysis, from roof to foundation.” Outraged because they thought the plans should somehow entitle them to a building permit, the owners come into our office. We have to tell an already angry and disappointed couple that a “complete structural analysis” and resulting plans and details will cost them several thousand dollars and set their schedule back anywhere from two to ten weeks, depending on our workload.

Consider several issues before buying a set of drawings from a plan book:

Is the design firm in your area?

Will your local building department accept plans from another state or region?

Do the plans conform to the current building code used in your area?

If you order reversed (“flopped,” or mirror image) plans, will the printing also be reversed?

Will your building department let you deviate from the plans without getting the changes approved (either by a local designer or by the original plan provider)?

Has the particular design that you want ever been built?

Does the firm selling the plans have licensed professionals who can assure that the plans meet the current building code used in your area?

Would the design firm provide you with electronic (CAD) drawing files?

There may be packaged plans out there that meet these conditions; we’ve just seen too many that don’t. I suggest that people seeking plans find a designer in the area where they will build their house, whether the designer sells plans out of a plan book or is a local contractor, home designer or licensed architect. Most important, do some research before you order a set of off-the-shelf plans.

Having worked for a natural-gas utility for 20 years with meter reading as part of my duties, I am concerned about the recent article “Electric-Meter Covers” (FHB #148, pp. 106-107).

First, let me say that under no circumstances should you ever cover or obstruct access to a gas meter. As for other meters, I cannot stress enough that you check with your utility company and even your fire department and building inspector before covering your meter. In an emergency, it may be necessary to remove the meter, and if a search has to be undertaken to locate it, lives could be lost.

Then there is the aspect of reading meters. Any time a reader has to search for a meter or open covers, it adds to the time and expenses of the utility. Remember that you don’t always have the same meter reader who happens to know where the meter has been hidden. Often, if the meter is visible from the alley or street, the reader may read it with binoculars.

Although I realize meters aren’t the most attractive features of a home, hiding them is not a good idea.

Fiberglass insulation is no longer labeled a possible carcinogen

The annual Houses issue included an article titled “Building Healthful Homes” (FHB #147, pp. 94-99). The article was interesting, but it contained some inaccurate statements about the health and safety of fiberglass insulation.

In October of 2001, all available health and safety research related to fiberglass, rock-wool and slag-wool fibers was reviewed by the International Agency for Research on Cancer (IARC; www.iarc.fr), a division of the World Health Organization. As a result of this evaluation, IARC lowered the hazard classification of glass, rock-wool and slag-wool fibers from a Group 2B classification (“possibly carcinogenic to humans”) to a Group 3 classification (“not classifiable as to carcinogenicity to humans”). Fiberglass is one of the most thoroughly studied building materials, and it has never been classified as a “probable carcinogen” by IARC.

IARC emphasized that “epidemiologic studies published during the 15 years since the previous IARC Monographs review of these fibers in 1988 provide no evidence of increased risk of lung cancer … from occupational exposures during manufacture of these materials, and inadequate evidence overall of any cancer risk.”

IARC’s comprehensive review of the extensive studies indicates that some of the prior reviews need to be updated. For example, in 1993 the U. S. Department of Health and Human Services National Toxicology Program (NTP) included fiberglass on its list of potential carcinogens based primarily on the now-outdated 1988 IARC classification. In addition, the California listing of fiberglass as “known to the state to cause cancer” was principally based on the now-superseded IARC classification. The North American Insulation Manufacturers Association (NAIMA; www.naima.org) has requested that the NTP harmonize its classification with the IARC.

Although the formaldehyde emissions from batt insulation are low, especially in a well-finished building, one goal in creating a healthful home is to eliminate as many sources of formaldehyde and other harmful chemicals as is reasonably possible. Luckily, consumers now have a better choice. Johns Manville (www.jm.com) no longer uses phenol formaldehyde as the binder in its product because, as they say in their literature, “it is the right thing to do for our customers and the environment.”

The article “Building Healthful Homes” (FHB #147, pp. 94-99) was most interesting, but the building method “… dating back 800 years” is wattle and daub, not waddle and daub. A wattle is an Old English word for a framework of woven twigs or sticks. It was used for fencing and sheep holds, etc. It also was placed between posts in houses and plastered or daubed with clay. As for the waddling, after carrying buckets of clay all day, who knows? 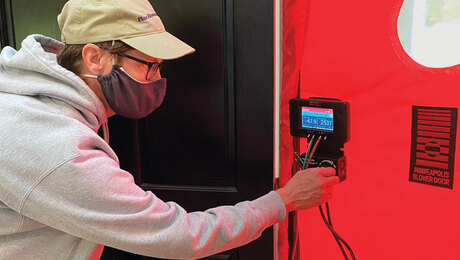