Despite all the talk these days about alternatives to wood framing, about 95% of new homes built in the United States have wood-frame walls. Most of these walls are framed with conventional solid-wood studs, which builders love to hate. But engineered-wood studs are now available (photo above), and they eliminate many of the headaches that can be caused by solid wood.

Within limits, a solid-wood 2×4 can come with 21⁄2-in. dia. knots, 11⁄2-in. dia. holes, splits, shakes and checks, cups, bows, crooks and twists—and even wane (bark, or the actual curve of the tree making up an edge). A 2×6 can have bigger holes and knots than a 2×4. Most of these characteristics don’t affect stud performance, but they can create extra work for builders and affect the finished appearance of a house.

For instance, when scattering studs to prepare for framing, carpenters routinely need to cull badly warped studs and set them aside for blocking and backing. Keepers are oriented crown up on the deck before assembly so that neighboring studs don’t bow in opposite directions. After the walls go up, studs that warp excessively need to be replaced or straightened, which commonly is done by kerfing the studs and reinforcing them with stud splints.

Studs with excessive wane might require doubling to provide sufficient backing for the edges of sheathing and drywall. And to top this off, trim carpenters often have to scribe finish materials such as plastic-laminate countertops to fit snugly against wavy walls framed with conventional studs. Using green studs can amplify these problems and cause a slew of others (including nail pops in drywall) as they dry and shrink. Problems can be minimized, but not eliminated, by using dry studs (see FHB #95, p. 124).

Another option is to use finger-jointed studs, which are becoming popular in the Southwest, where the arid climate can wreak havoc on solid-wood studs. Manufactured by Louisiana-Pacific (800-635-3437) and others, the engineered studs are glued up out of short, dry lengths of end-jointed lumber to limit twisting, bowing and cupping. The studs are accepted by all model building codes as a substitute for solid-wood studs.

Liberty Lumber in Phoenix, Arizona, charges up to 10% more for finger-jointed studs than for regular studs (at this writing, both types are the same price).

Trus Joist MacMillan’s new TimberStrand laminated-strand lumber (LSL) studs (800-628-3997) break new ground. TimberStrand studs are made by treating long strands of wood with a polyure-thane resin, compressing parallel strands into 8-ft. wide billets that are up to 51⁄2 in. thick and 48 ft. long, and then cutting the billets into 2x4s and 2x6s in lengths that go up to 22 ft. (or as much as 48 ft. for commercial studs). The studs can be combined with ordinary wall plates or with TimberStrand plate stock.

TJM pitches its new studs as resource-efficient because they’re made of plentiful, fast-growing aspen or poplar trees. More relevant to the job site, the studs are manufactured with a uniform moisture content, and they have no knots, pitch pockets or wane, which makes them exceptionally stable and consistent in quality. On the downside, the studs tend to have sharper edges than solid-wood studs, so they require a little more care in handling. And although the studs are sold nationally, they often must be special-ordered.

TimberStrand studs also are expensive. Dewey Meidl, manager of Interstate Lumber in St. Paul, Minnesota, tells me his company sells the studs for about twice the cost of conventional studs. But he adds that many contractors are framing kitchen walls with TimberStrand studs so that cabinets can be installed more easily.

My California supplier sells TimberStrand studs for a little more than twice the cost of regular studs. It reports that builders are using the engineered studs mostly for kitchen and bathroom walls, tall walls, long walls that will be tiled and other areas where the use of straight, stable studs will significantly decrease labor and improve quality.

Sonora, California, builder Jim Weller, who has used TimberStrand studs for commercial work, including 26-ft. high walls, tells me he loves the studs because they’re dead straight and “there’s absolutely no waste.” Weller also plans to use them for residential work. Traverse City, Michigan, builder Keith Baker says the studs are “worth every penny.”

Idaho Forest Industries (208-765-1414) has its own partial solution to the stud dilemma: 11⁄4-in. thick solid-wood studs designed mostly for use in interior walls. The studs come from side cuts off logs and are graded #2 and better, which makes them as strong as 11⁄2-in. thick studs but with fewer defects. The skinny studs also are wane-free, which helps to compensate for their reduced nailing surface. At the moment, the studs are sold only in parts of Washington and Idaho and cost about 10% less than conventional solid-wood studs. Whether these studs will ever see national distribution remains a question. 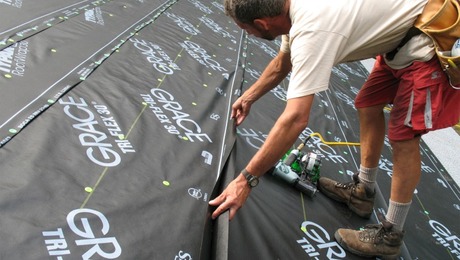 Tar paper is still a good option, but synthetic underlayment may suit your reroof project better.