When Dryer Vents Need a Boost

What can you do if your clothes dryer is too far from an exterior wall?

I need to vent my clothes dryer. It appears as though my only option is to run the vent pipe through the roof. Is this plan OK? Is there a distance after which I’ll need to use a booster fan?

Mike Guertin, a builder and remodeling contractor in East Greenwich, R.I., replies: The short answer to your first question is yes: You can vent the dryer through the roof. But consider other options as well.

When I’m laying out an exhaust duct, I look for the shortest route with the least number of turns. The shorter the duct run, the better the dryer will perform. Clothes will dry faster, and you’ll use less energy.

No matter which route you choose, there are some things to keep in mind. First, use 4-in-dia. duct, and don’t reduce it to anything smaller. Also, use flexible duct sparingly. The ribbed surface reduces airflow dramatically, and it collects lint. Use flexible duct only in areas where it can be accessed easily and cleaned.

As for duct material, don’t use flexible vinyl or rigid PVC. Vinyl deteriorates over time. Both vinyl and PVC are fire hazards. For flexible lines, use laminated aluminum foil or semi-rigid aluminum duct. Keep in mind that laminated foil is thin and soft, and reduces airflow significantly. Semi-rigid aluminum is ribbed and reduces airflow, but not as badly. The best option is rigid galvanized or aluminum pipe. Rigid pipe and fittings are fireproof and have smooth walls, so lint is less likely to build up. 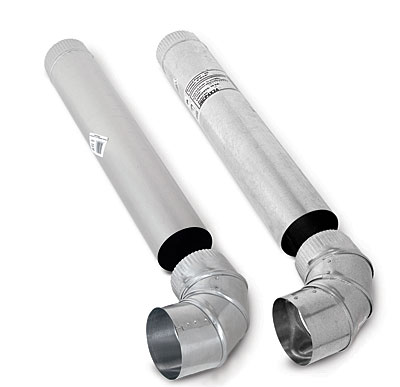 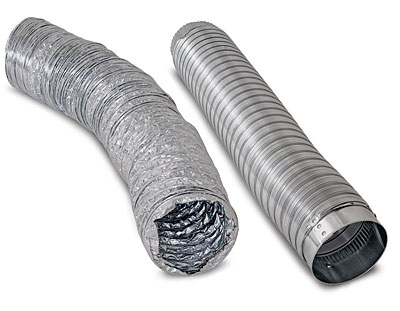 Flexible duct collects lint. If you have to use it, choose the laminated-aluminum foil duct (left) found in most vent kits because it doesn’t deform or tear as easily as the semi-rigid aluminum (right).

The typical maximum-allowable duct run for dryers is 25 ft.; anything longer than that requires a booster fan. The 25-ft. limit presumes a 4-in.-dia. smooth, straight run, so flexible duct and fittings reduce the limit. A 90° elbow has the same airflow restriction as 5 ft. of straight pipe, and a 45° elbow will cost you 21⁄2 ft. of duct run.

Also, insulate the duct in unconditioned space. If it stays warm, it will be less likely to form condensation and collect lint.

Dryer duct runs longer than 25 ft. usually require a booster fan, which can extend the length limit to 60 ft. Inline fans such as the one shown here are simple to install and don’t require special control wiring. Just provide power to the fan, and an internal-pressure switch turns on the fan when the dryer starts ($245; www.fantech.net). The pipe shown here still needs to be insulated to complete the installation. 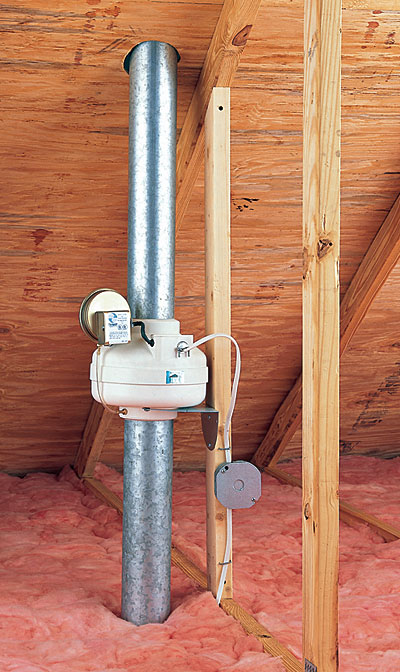 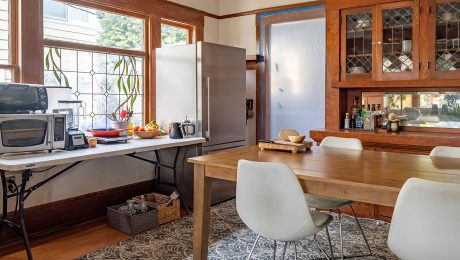