A House with Geothermal Heating and Cooling

A builder’s home unearths the benefits of geothermal

After a dozen years in the construction business, Bob Burnside wanted to build a house that would symbolize his commitment to energy efficiency. “I wanted it to be on the leading edge of what we do here in Michigan,” he says.

The president of Fireside Home Construction in Dexter, Mich., Burnside partnered with Riverbend Timberframe of Blissfield, Mich., to design a home that combines traditional timber-frame construction with an insulated foundation and walls and roofs built with energy-efficient structural insulated panels (SIPs). A 2kw photovoltaic (PV) system helps to shoulder the home’s electrical load, and a geothermal system provides forced air for heating and cooling on the two main levels and radiant-floor heat in the master bath, garage, and lower-level office.

Built in 2007, the home was the first in the state to earn a LEED platinum-level designation (for more on the LEED program, see p. 18). It rated 5 stars under the Energy Star program, achieved the gold level for the Michigan Green Built program, and was a gold winner in the National Association of Homebuilders’ 2008 Energy Value Housing Awards. Its HERS rating is 37. (A house built to the International Energy Conservation Code scores 100 on the HERS scale; a house that requires no net energy scores 0.)

Key to its energy efficiency is the home’s tightly insulated envelope, which minimizes indoor temperature swings even as outdoor temperatures range from 10°F in winter to over 90°F in summer. “Because the house is so tightly sealed, it stays comfortable all the time,” Burnside says. “Last January, we lost electricity for 16 hours. It was 5 degrees outside, and the wind was blowing like crazy. In that time, the temperature inside dropped from 71 to 66. That says a lot about how well these houses perform.”

With his staff working in a lower-level office, the house is occupied throughout the day. Electric bills of about $70 a month cover the cost of electricity to run the geothermal heat and hot-water systems and are regularly offset by utility credits from the PV system. With the bill for heating, cooling, and hot water netting out at about $660 a year, Burnside is a geothermal advocate. “There’s no question it’s the most efficient way to heat and cool a house,” he says. “When you combine that with the efficient shell we built, we have a system that’s well insulated from the price swings of oil and natural gas.”

Although the biggest variable in Burnside’s energy bills is the cost of electricity, that expenditure is offset in part by the PV system mounted a short distance from the house. In addition, the home is outfitted with Energy Star appliances, and its electrical load is managed with a Lutron lighting-control system. Five of the home’s lighting circuits are controlled with a panel in the master bedroom and a remote switch in the car. “I can push one button and turn them all off,” Burnside says. “It’s energy savings, safety, and security rolled into one.”

Most of the technologies used (except the solar arrays) have become standard on the homes Burnside builds. Specifically, he advocates the whole-house approach that he, his crew, and Riverbend took in designing and constructing his high-efficiency showcase. “To build an energy-efficient house, it has to be built as a system,” he says. “Whether you’re talking about fluorescent lighting, geothermal, or energy-efficient windows, it all has to be designed to work together.”

How it works: Heat from the earth

Geothermal heating and cooling are based on the fact that while temperatures above-ground can vary greatly during the year, temperatures belowground remain fairly constant. In winter, when the temperature underground is warmer than the air temperature, tubes carrying water or freeze-resistant liquid bring heat from the ground to a heat pump that extracts the heat and distributes it throughout the house. In cooling mode, the heat pump functions like an air conditioner, extracting heat from the home and releasing it underground. In many systems, like Burnside’s, some of that excess heat is routed through another heat exchanger called a desuperheater to produce domestic hot water.

Not Just for New Homes
Retrofits account for about 70% of the geothermal installations done by Michigan Energy Services, the company that installed Burnside’s system. The easiest retrofits tap into existing forced-air systems, according to vice president Rob Derksen. Costs range from $18,000 to about $30,000, depending on site conditions and the extent of modifications required. Although geothermal is often used in conjunction with radiant-floor heating, the water it produces is not hot enough to make it compatible with hydronic baseboard systems. In that case, forced-air ductwork is usually added.

Geo-Boost
The 2008 Emergency Economic Stabilization Act created a federal tax credit of up to $2000 for homeowners who install geothermal heat-pump systems. In addition, many electric utilities offer rebates or discounted electric rates to customers with geothermal systems; Burnside’s system qualifies his house for a rate that’s 50% lower. For a state-bystate listing of renewable-energy incentives, including geothermal, visit www.dsireusa.org. 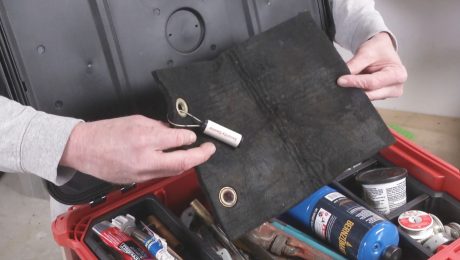 Take a look inside this toolbox to see the basic tools that editor Patrick McCombe relies on when repairing water lines, drains, and plumbing fixtures.