Getting on board with fire sprinklers

This section in the 2009 edition of the International Residential Code (IRC) has caused a lot of controversy. The IRC is a model-code book, so it does not become law unless adopted by a local jurisdiction. Because of that, many states, cities, and counties are editing out this section of the code and choosing not to make sprinklers mandatory in homes.

To become more acceptable, the installation of sprinklers should be accompanied by safety trade-offs that offset costs and incentivize their use. Trade-offs may include a lowered fire rating of the wall assemblies between units of a multifamily home or a lesser requirement for fire-access roads in a subdivision. Acceptance may take a few years, but I am confident that with adequate information about how sprinklers work and a few sprinkler success stories, homeowners will begin requesting sprinklers in their new homes.

Builder buy-in lacking
In a code-development committee meeting last year, I suggested several ways builders, building officials, and fire officials could strengthen their partnership. I recommended joint training on building codes, uniform regional policies on troublesome code requirements, and joint publicity campaigns enriching the public perception of our professions. Finally, I suggested that we join together in sponsoring voluntary fire-sprinkler installation in a couple of homes each year.

The Virginia Building and Code Officials Association (VBCOA) had recently sponsored sprinkler installations in two homes, an action that received a lot of publicity. It seemed to me that it was time to get others involved. A few builders applauded my speech, but one builder came to me and confided that he would work with us on many things, but on fire sprinklers, only over his dead body. I’m not sure if it is the lack of information about performance or the misinformation about cost that has so many rejecting the use of sprinklers, but I’m confident that there is good reason to protect homes with sprinklers and that costs are insignificant.

Costs: not a deal breaker
VBCOA funded the installation of sprinkler systems in two homes to demonstrate our support of building safety and to determine exactly what they would cost. We had heard wild claims of $20 per sq. ft., which would translate to $40,000 for a 2000-sq.-ft. house. That certainly seems like a deal breaker for a prospective buyer, but the cost was nowhere near that much.

The 2009 IRC (Section P2904) allows a residential sprinkler system to be installed in a prescriptive manner—think nailing patterns for stud-frame walls. This allows a builder to use tables and formulas to determine pipe size, materials, and installation method instead of having it designed by an engineer. That saves a lot of money. Our systems cost a little less than $1.50 per sq. ft. We spent $1500 for each sprinkler system. Proponents of this type of system have told me that it could be as low as 50¢ per sq. ft.

As with any new technology, it takes time to smooth out the wrinkles. Building and fire officials can help by providing low- or no-cost training in the new residential firesprinkler standard for the plumbers who will likely install these systems.

Insurance and public safety
The Insurance Service Office (ISO) performs a building-code effectiveness grading schedule for jurisdictions throughout the United States. In this rating, points are granted to jurisdictions that adopt and enforce mandatory fire sprinklers. This means that the insurance industry accepts the value of residential fire sprinklers, and owners of homes protected by sprinklers will save on insurance premiums. Current homeowners’ insurance discounts range from 5% to 15%.

There is also a public benefit. Municipalities pay the salaries of firefighters and other fixed costs associated with 24-hour-a-day fire-protection services. As more and more buildings of all types are protected with sprinklers, these costs will be safer. More important, the lives of our public servants will be safer.

The information paradox
The U.S. Fire Administration (USFA), part of the Department of Homeland Security, provides national leadership for fire and emergency services stakeholders in prevention, preparedness, and response. According to USFA, in 2009 there were 356,200 house fires, 2480 deaths, 12,600 injuries, and more than $7 billion in resulting damage. Unfortunately, the facts about fire-sprinkler safety in residential homes are limited by the lack of installations across the country. However, in Scottsdale, Ariz., home fire sprinklers have been mandatory since 1986, and a 20-year study formally known as theScottsdale Report (read it at www.homefiresprinkler.org) shows a significant savings in lives and property in homes that are equipped with sprinklers.

So now what?
We know residential fire sprinklers are a safety feature that works. I believe that they are cost-effective, even without the use of incentives or trade-offs. If they are implemented as a requirement, however, sprinklers could damage the construction industry by scaring potential homeowners away from building a new house.

So how do we sell sprinklers to the public? We must show them why they should add this lifesaving feature to their homes on a voluntary basis. If building officials join together with their local builders’ associations and simply pay for the cost of just one sprinkler system a year, the public will soon see that sprinklers save lives and property, and that builders and buildingsafety professionals all agree on their value. 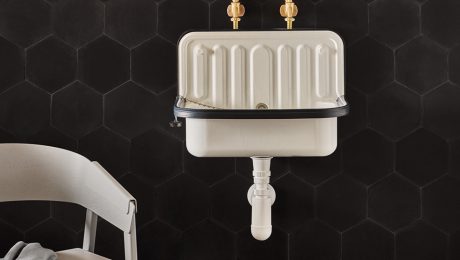 An interior designer explains why she chose this sink for her kids’ bathroom.