The Future of Housing in America

Carter Scott is building and selling whole neighborhoods of affordable spec homes that produce more energy than they consume.

Synopsis: Carter Scott is dedicated to building houses that don’t contribute to global warming, and he is constantly looking for ways to improve their energy efficiency. He has gotten so good at this that, with state and federal subsidies factored in, he is able to sell his houses for the same price as comparably sized houses that are built to code and that don’t have photovoltaic panels on the roof. As editor at large Kevin Ireton explains in this article, though, Scott is not running a charity; in fact, his company has doubled its revenues every year since 2010. Unlike most production builders, who find what works and stick to it, Scott is constantly experimenting with materials and techniques in an effort to increase energy performance while keeping building costs down. He has reached the point where net-zero energy use is the standard rather than the goal and has set his sights on a new goal: building houses that produce more energy than they consume. A sidebar illustrates how Scott is able to get to net zero by reducing energy use and then adding a robust PV system. See more award-winning homes from the 2013 HOUSES Awards.

On May 30, 2002, the Zoning Board of Appeals in Townsend, Mass., voted unanimously to deny Carter Scott’s application for a housing development at Coppersmith Way. Board members were concerned about wetlands and wildlife on the property. They worried about excess nitrogen from septic systems polluting the town’s water supply. And they didn’t think the town needed any more affordable housing.

Another builder had passed on the land because he thought it would be tough to get five houses on the 30-acre property. Scott filed a plan under the state’s 40b affordable housing laws that called for 41 units, including 35 single-family homes. The 40b law frees a developer from local zoning regulations so long as 25% of the units meet the state’s definition of affordable housing.

Jason Cowan, who used to live next to the Coppersmith Way property and who eventually built most of the houses there, admits he was on the fence about the development. “You hear ‘affordable housing,’ and you think the projects are coming in,” Cowan says, meaning public-housing projects — in other words, slums.

The ZBA’s refusal to grant a building permit came after a year of meetings. “I was negotiating in good faith,” Scott says, “and the rug was pulled out from under me.” To keep up payments on the property, Scott got a part-time job selling shoes.

A year and a half later, the Massachusetts Housing Appeals Committee overturned the ZBA’s ruling. The ZBA took the case to the state’s Superior Court and lost. Scott got his building permit four years after first submitting his plans. At that point, the property he had bought for $280,000 was appraised at $1.8 million. Road construction began at Coppersmith Way in August 2005.

As it turned out, the development Scott built was hardly a slum. It was a proving ground where he learned to build tight, super insulated houses that run largely on solar power. He sells these homes for the same price as comparably sized houses built to code with no photovoltaic panels on the roof, and he makes money doing it. Scott’s company, Transformations Inc., has doubled its revenues every year since 2010.

Like many kids, Carter Scott painted houses in the summer to work his way through college. Unlike most kids, though, Scott had 30 employees by the time he finished Northeastern’s five-year engineering program in 1987. His company had expanded from painting into remodeling and small additions. Then, as Scott puts it, “I skipped right over building individual houses to building subdivisions.”

Scott began his first subdivision in Lexington, Mass., in 1993, and the first house he built was for the director of Northeast Energy Efficiency Partnerships, who wanted an Energy Crafted Home. The Energy Crafted Home Program was a New England based precursor to Energy Star and encouraged the construction of houses that were substantially more energy efficient than code. That’s where Scott started. 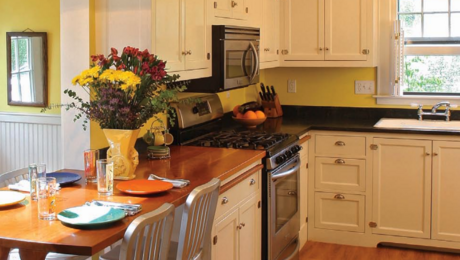 Recirculating hoods work as part of a system to move pollutants in the air further away from the breathing zone.