An ambitious Habitat for Humanity project in River Falls, Wis., is now in its second year of construction, with three net-zero-energy duplexes complete and another dozen housing units plus a community center still to come.

Eco Village, located in a city of 15,000 about 35 miles east of Minneapolis, is the work of St. Croix Valley Habitat for Humanity, the City of River Falls, the University of Wisconsin, Frisbie Architects, the St. Croix Institute for Sustainable Community Development, and a number of corporate and community partners.

In addition to having high-performance houses and very low utility bills, Eco Village residents will have community produce gardens, common green spaces, and walking trails. There are even plans for a small fleet of communal electric cars. Houses are designed to qualify for LEED-Platinum certification.

“Eco Village is a real-world illustration of the viability of sustainable design–not only in environmental terms, materials used or energy efficiency, but also as it applies to broader economic concerns, social impact, transportation, food, water and self-sufficiency,” Habitat says in a brochure describing the project.

Houses come in different sizes, but all are high-performance

Jim Farr, executive director of the St. Croix Valley Habitat chapter, says that the houses in Eco Village have two, three, or four bedrooms, ranging in size from 800 sq. ft. to 1200 sq. ft. They’re “modest” in size, but because of open floor plans and large windows, they have plenty of natural light inside.

More to the point, the houses have tight envelopes, with preliminary HERS ratings as low as 4 and blower-door test results from 0.9 to 1.0 air changes per hour at 50 pascals–far tighter than conventionally built houses. Among the features described by construction operations manager Jim Cooper:

Houses have their own photovoltaic arrays, between 5kw and 6kw in capacity, plus solar-thermal systems designed to provide about half of the domestic hot-water demand. A separate 75kw PV installation at one end of the property will provide power for community purposes, such as lighting, and will also produce revenue that can go toward additional construction, Farr says.

As many as eight single-family houses will be added in 2013, along with a 5000-to-6000-sq.-ft. community center. The project, which should be completed by late 2014 or early 2015, “fit really well” with River Falls’ long-range plans for affordable housing, Farr says. The idea of building the community percolated for several years, and eventually the city donated the “greyfield” land for the project. A long list of corporate and foundation donors contributed money, expertise, and building materials to make it possible.

Qualifying families make 25% to 60% of the median income in the area, between $25,000 and $50,000 per year, Farr says, and contribute 500 hours of “sweat equity,” typically on their own house or another house in the community, as their down payment. St. Croix Valley Habitat for Humanity holds the 30-year, 0% mortgage.

The many energy enhancements should save a family between $200 and $300 per month in utility bills when compared to a conventional home of the same size and $100,000 over the course of the 30-year mortgage, Farr says, adding that low-income families that Habitat for Humanity serves often come from substandard housing and are disproportionately affected by high energy costs.

In discussing the project, Farr returns repeatedly to the community nature of Eco Village, not just its high-efficiency houses or PV arrays.

There was the decision not to plant the oak and maple trees you might in a typical development in the area, but an “edible landscape” of fruit trees. There will be four community gardens when the project is fully developed, as well as walking trails and a community center.

The four to six electric vehicles that Farr hopes to add will be available to Eco Village residents for errands, potentially reducing the number of vehicles in the average family from two to one. That will mean significant savings for the families while cutting the community’s carbon footprint.

About one-third of the houses in a Habitat for Humanity net-zero-energy community in Wisconsin have been completed. When fully built, Eco Village will include 18 housing units and a community center.

Houses have their own photovoltaic arrays. In addition, Eco Village will install a 75kw communal array for lighting walkways and as a source of revenue. 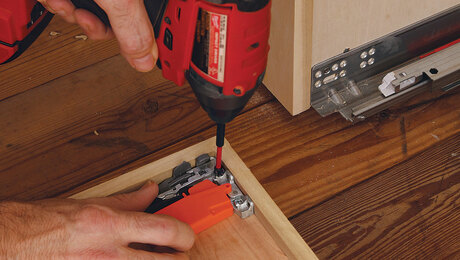 Drawer Slides for Every Budget

Undermount, soft-close slides are a cabinetmaker's dream, but lower-cost options can be reliable when installed with care.