For those of us who can’t just write a big check when it’s time to buy a new or existing house, paying for energy efficiency can be a little easier thanks to energy-efficient mortgages (EEMs). Unlike regular mortgages, which don’t take projected utility bills into account, an EEM recognizes that the owner of an energy-efficient house will pay lower utility bills and, therefore, be able to afford a mortgage that includes the extra costs related to efficiency. In addition to making energy efficiency affordable for homeowners who might not be able to afford the upgrades upfront, EEMs provide homeowners with a greater mortgage-interest tax deduction while lowering their energy costs. EEMs can also be used for refinancing a house.

Unfortunately, because the mortgage industry and state and federal governments have not put much of an effort into promoting EEMs, most current and would-be homeowners have never heard of them. Also, many EEM lenders require an energy audit. (They don’t necessarily care about energy efficiency; they simply want to make sure that existing or proposed upgrades will be cost-effective.) This may turn off borrowers who are unfamiliar with such audits. However, with building codes getting stricter around energy efficiency and energy audits becoming more common, demand for EEMs will likely grow.

In addition to the three options discussed here, several states have their own programs to make energy-efficient homes more affordable. For example, the Colorado Energy Office has partnered with the Bank of Colorado and Wells Fargo to offer a 1% reduction in the cost of a mortgage up to $500,000 used to purchase a new Energy Star home.

Lenders who sell their loans to Fannie Mae offer conventional EEMs, and anyone who qualifies for a conventional mortgage can also qualify for an EEM. In order for a house to be eligible for an EEM, it has to undergo an energy audit from a certified Home Energy Rating System (HERS) rater. For a new or existing house that’s already energy efficient, the audit report must verify that the projected utility costs will be low enough to compensate for the higher mortgage payment. For an existing house that’s inefficient, the report must recommend specific energy improvements, estimate the monthly savings to the borrower of implementing those improvements, and verify that the improvements will be cost-effective.

Fannie Mae allows financing for energy upgrades to an existing home in an amount up to 10% of the appraised value of the home with those upgrades included. Lenders must set up an escrow account for the portion of the loan that’s to pay for the energy upgrades, with the money released to the borrower at the completion of the work. Fannie also will provide lenders with a $250 credit, to be passed on to the borrower to help cover the cost of the HERS audit. Freddie Mac doesn’t have an EEM program per se, but it does allow a lender to roll the cost of energy upgrades into the total loan amount and to increase the debt-to-income ratio beyond the usual 36%.

The Veterans Administration offers EEMs to qualified military personnel, reservists, and veterans as part of a regular VA home loan. The energy-related portion of the loan is capped at $3000 with documented costs of the improvements but without an energy audit, and at $6000 with a HERS audit or an audit from the local utility company. Mortgages of more than $6000 require prior approval from the VA. If the improvements are not completed by the time the loan closes, the lender may set up an escrow account containing the amount needed to complete those improvements. VA EEMs can be used to purchase or refinance existing homes only.

When the Federal Housing Administration started an EEM pilot program in five states in 1992, very few conventional EEMs had been issued. EEMs received a small boost when the FHA expanded this program nationwide in 1995, although EEMs still represent a tiny fraction of the mortgages insured by the FHA. FHA EEMs are available to buyers who meet the income requirements for an FHA-insured loan and do not require a down payment beyond the amount required for the basic mortgage (3.5%).

The maximum amount of an FHA EEM intended to cover energy improvements isn’t so easy to calculate. It’s capped at the lesser of 5% of one of the following: (1) the property’s value, (2) 115% of the median area price of a single-family dwelling, or (3) 150% of the conforming-loan limit (this limit restricts the size of loans that Fannie Mae and Freddie Mac can purchase; in most counties in the United States, it’s $417,000 for 2014). In any case, the amount of the energyrelated part of the loan may not exceed the projected savings, although up to $200 of the cost of the required energy audit and the closing costs may be included also. An FHA EEM may be used to buy a new or existing home. 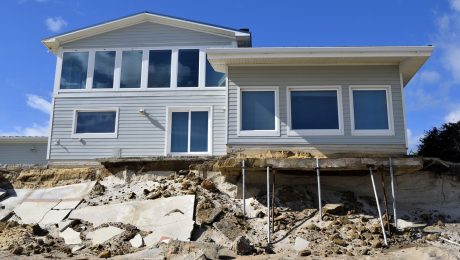