Remodeling carpenters routinely set large beams in cases such as the one shown here, where the beam replaces a bearing wall. Whether a beam is made from engineered lumber or regular old 2x12s, the challenge is weight. Here, a new beam was made from three 16-ft.-long 1-3/4-in. by 11-7/8-in. LVLs. It would have been difficult to raise the assembled beam, but the trick is to raise one piece at a time and then fasten the three together in place.

Replacing a wall with a beam requires carrying the loads while the old wall is being removed and the new beam is being installed. I built a temporary wall about 1 ft. beyond the old wall before removing it. I was lucky in that the joists above overlapped by several feet and so the temporary wall could be held back that far, which provided more room to work. In most cases, a temporary wall has to be built much closer to the existing wall, or even in contact with it, to catch the joist overlap and to support the floor.

This beam was engineered for its loads. (Lumberyards often provide this service for free.) Each end of the beam imposes a substantial load that requires a direct path through the framing to the foundation. Here, one end of the beam landed above the foundation wall, while the other was directly over a column in the basement. To complete the load path, all I had to do was place squash blocks (double or triple studs cut to the depth of the floor joists) between the bottom of the subfloor and the main beam below. In other cases, I might have had to add new columns and footings to carry the newly concentrated loads.

Use the right hardware

In combination with an impact driver, structural screws by manufacturers such as FastenMaster, GRK, Screw Products, and Simpson Strong-Tie are increasingly used in place of nails and lag bolts. Although they’re more expen sive than those options, structural screws have some advantages. The GRK RSS screws used here require no pilot holes to minimize wood splitting, and they are configured to draw layers together as they are driven. Although multipurpose screws are not as strong as structural screws, they are useful for toe-screwed connections and temporary assemblies.

In areas where seismic and wind-up lift forces are big concerns, specific hardware such as hurricane ties are required to connect the beam to the rest of the framing. 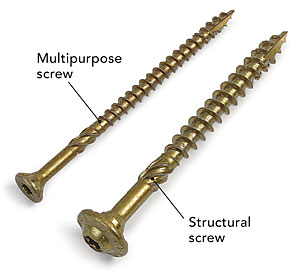 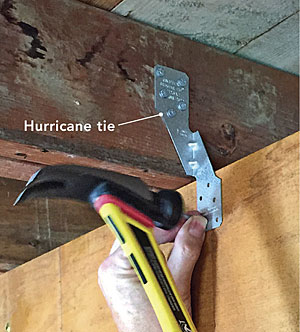 1. Install kings and plates. King studs tie the beam ends to the existing framing. Cut a new bottom plate long so that fasteners don’t split it, screwing it to the framing below where the king and jack studs will go. Cut the plate flush to the jack studs later.

2. Mark the beam location. To keep the beam straight, snap a chalkline on the joists between the edges of the king studs for a guide.

3. Use the beam depth to size the jacks. Measure the depth of the beam stock, and mark that on the king studs. Measure up to the mark from the bottom plate to determine the height of the jacks.

4. Install jack studs and stop blocks. Two jacks were required at each end, but only one was installed at first to ease setting the beam. Temporary blocks on the jacks guide the beam placement.

6. Slip the plies into place. With the top leaning in, place both ends of the first ply at once onto the jack studs. A few sledgehammer taps along the bottom face stand the ply up.

7. Install the remaining plies like the first. Nails can be used to join the plies, but structural screws set with an impact driver are better at drawing them into full contact with one another. Follow the designer’s fastening schedule.

8. Fasten to the joists. Join each joist to the beam with a 31⁄2-in. #10 multi-purpose screw driven at an angle. In some circumstances, framing hardware is required to resist seismic or uplift loads.

9. A wide opening. With the second jack studs placed, the bottom plates trimmed, the squash blocks placed below, and the temporary wall removed, the new beam is ready for drywall.