Where Concrete is King 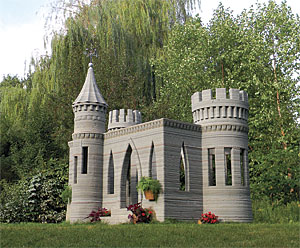 In the summer of 2012, Andrey Rudenko began toying with the idea of creating a 3D printer capable of constructing homes. An experienced contractor with a background in engineering and architecture, Rudenko’s prototype was a small 3D printer that created plastic objects. For two years he experimented with enlarging the printer and producing objects using different types of concrete mixes. In May 2014, Rudenko put his printer to the test to create a castle playhouse. Its design allowed him to experiment with creating a variety of shapes from the concrete. The castle was printed completely outside in his yard, where the custom concrete mix set quickly in the summer sun. The castle is 12 ft. high, 16-1/2 ft. long, and 10 ft. wide. Construction of this castle took one month, during which time printing was often stopped to make adjustments to the printer. If the printer were to run nonstop, it would take only a week to print a second one.Rudenko’s 3D printer is “centered on simplicity, easy maintenance, and parts replacement.” Transporting such a large rig would seem to be problematic and expensive, but Rudenko says that “the printer’s complicated knots are simplified so they can be taken apart, shipped, and then put together at any time.” He credits his success to design engineer Mikhail Tikh, input from the RepRap (replicating rapid prototype) community, and those who helped him with the manual labor. Given the success of the preliminary testing, Rudenko is confident that he can now print a medium-size house. 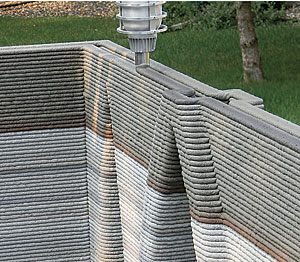 Come to Our Annual Party in Las Vegas and Support #KeepCraftAlive

Enjoy good food, drinks, and company January 22, 2020, from 5:30 PM to 8:30 PM at the Hard Rock Hotel—proceeds provide scholarships for the next generation of craftspeople.