The Future of Electric Pickups

If you want to drive an electric pickup truck, you could wait a year or two for the first commercial EVs to be released, or you could build your own like Simone Giertz did.

Here at Fine Homebuilding magazine, we’re no strangers to the gas-guzzling nature of our pickup trucks, and we know you aren’t either. So, we decided to do some research and check out the options available for someone looking for an energy-efficient alternative to their 18- to 20ish-mpg pickup. Unfortunately, there weren’t many options. Unless you want to drive a glorified golf cart around, you have your hands tied when it comes to an electric pickup alternative. There is one creative solution going viral on the internet right now: Simone Giertz’s Youtube video, “I TURNED MY TESLA INTO A PICKUP TRUCK”. (see video below)

As the title suggests, she bought a Tesla Model 3, removed the top half of the back seat and trunk area, took everything out of the back and laid a truck bed in the rear. I highly recommend watching the full video because what Simone and her team does is genuinely  fascinating and entertaining, but if you’re squeezed for time, an expertly made fake commercial she posted on her YouTube channel fully demonstrates the final product she’s appropriately named “Truckla.”

DIY EVs aren’t for everyone

Sadly, I don’t think I’m bold in assuming most of us don’t have the time or energy to pull this off, and if something goes wrong with Simone’s Truckla, I’d be willing to bet her warranty is void and Tesla won’t do much to help, so following in Simone’s footsteps is probably not the best idea. The good news for us is that the future is bright, albeit expensive, for those looking for an electric pickup.  The first announcement of an electric pickup truck, but still probably the farthest away, is the Tesla Truck. With very little information out about the truck and reveal deadlines getting pushed back (it is supposedly being revealed this summer), the truck seems far away, but Musk’s claims about the truck’s performance are incredibly exciting. He claims that the truck will have 300,000 lb. of towing capacity and both a 240v connection and air compressor to run heavy-duty tools and air tools. These are three exciting specs—but I’ll believe the 300,000 lb. of towing capacity when I see it. He says he wants the truck to be better  than the Ford-150, and a better sports car than the Porsche 911. All these goals along with a hopeful <$50,000 price tag are on brand with Tesla’s usual outlandish promises, but only time will tell if these bold claims turn out to be true.

Who will sell the first real electric pickups?

The other truck in the face of the media is Ford’s Electric F-Series. A research engineer at Ford wrote to the Fine Homebuilding podcast team with some information about what Ford has in the works in regards to electric trucks. To listen to the full episode on our website, click here. He wrote that Ford will be coming out with a F-150 hybrid in 2020 and has plans for a fully electric pickup, but the timeline on that is still undetermined. The Detroit News writes, “Ford plans to spend $16 billion on electric vehicles over the next few years to bring 16 battery-electric vehicles and 24 hybrid vehicles to the market.” Ford seems to be making a serious push to taking their incredibly popular truck models and creating functional yet earth-friendly vehicles out of them. Not only is Ford developing their own line of electric vehicles, but they—along with Amazon—have invested a combined $1.2 billion in automotive company Rivian. Rivian has devoted themselves to sustainable transportation and, unlike the other two aforementioned companies, have trucks available for pre-order now with a $1000 deposit. This deposit will go towards the $69,000 price tag. Plans are to release them in the fall of 2020. Rivian’s R1T Truck will eventually have three models that offer 230+, 300+, and 400+ mile ranges on a full charge and 402 hp, 754 hp, and 700 hp respectively, as well a 11,000-lb towing capacity with its largest vehicle. To watch the vehicle in action, click below.

With hopes of being the first to the electric-pickup market with a late 2019 and early 2020 expected release date, the Workhorse W15 truck boasts a 200 mile range and a tow rating of 6000 lb., all with a 100kwh battery pack. You can reserve one now for $1000, eventually paying $51,000 more to meet the full price of $52,000. A two-year-old review of this truck can be watched below, but Workhorse’s own CEO Steve Burns has a blog on his website discussing Workhouse plans. Unfortunately, he last posted on it in January, but hopefully he’ll return to it and give us some new information about what they have in store for the Workhouse W15.

Only founded in 2016, Atlis Motor Vehicles is working on their own electric pickup truck: the Atlis XT. It will have three models that offer 300, 400, and 500 mile ranges, payload capacities from 1000 lb. to 5000 lb., and towing capabilities ranging from 6000 lb. to 17,000 lb. They say they’re a truck for people with busy schedules who need to move with little downtime. “Why?” You might ask. Well, according to their website, it should only take you 15 minutes to fully charge your truck. For reference, the Tesla Model 3—a compact sedan—can go 310 miles on a single charge and can go from 0 to 180 miles worth of charge in 15 minutes at their own unique Tesla charging stations. So, Atlis’s 15-minute full charge on a pickup will be quite impressive, but we’ll have to wait and see if they can pull it off. There is also worry because it seems they have yet to build an actual prototype—a video from their YouTube channel from April of this year shows the car design, but it is simply a CGI rendering.

The last truck on the list is the Bolinger B2—a truck that seems to be designed to be a tool, not a toy. The truck looks like it is going to be built for heavy-duty work. It features a fold-away cab wall that can allow for even more storage when transporting tools and materials. It will be capable of carrying 16-ft. cargo through a patented full-length pass-through (see image below) with a 5000-lb. payload. It has a 200-mile EPA, but has a 7500-lb. towing capacity. As pickup trucks go, this one seems to offer a lot of utility even compared to current models on the market. And, with a Land Rover–inspired design, it doesn’t look too shabby either. They’re prototyping the vehicle now, in 2019, and have plans to hit production in 2020. Their website offers the option to “reserve one now” for no price and supposedly hit 25,000 reservations earlier this year with a price point of $60,000, so obviously this vehicle has already generated substantial interest. 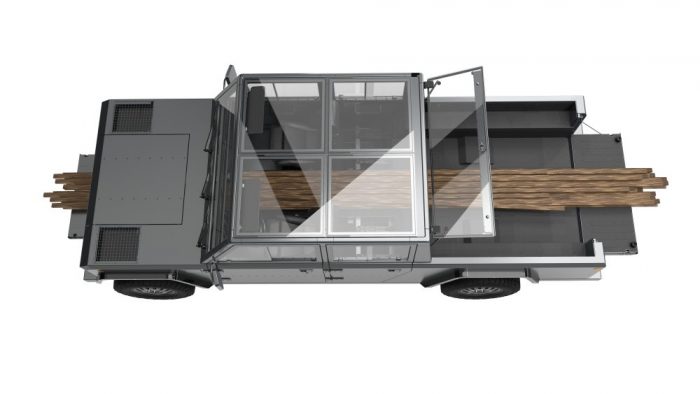 The future looks bright for electric pickup trucks. There are a lot of options coming to the market soon, and probably many more after that. The pricing seems fairly expensive still, but as technology improves and competition increases, those prices will surely fall. If you’re in the market for an electric alternative to your pickup, you should have plenty of choices within the next few years. And after all, if you get too impatient, like Simone Giertz, you can just build your own.