When Will We See the End of Soaring Lumber Prices?

Synopsis: Contributing writer Scott Gibson investigates the growing cost of lumber and all the factors that have contributed to the increase in prices, from the labor shortages and restraints in the supply due to the pandemic to the surge in home building and remodeling.

Like many other parts of the U.S. economy, the lumber industry saw prices fall in the spring of 2020 as the COVID-19 pandemic took the country by the throat. Sawmill prices for framing lumber started to decline in the second week of March, and a month later had dropped to their lowest level since the previous summer. Then something weird started to happen.

Despite ongoing business closures and rising unemployment, lumber prices began to climb. The widely watched Framing Lumber Composite Price index published by Random Lengths bottomed out at $348 on April 10, 2020, and other than an eight-week dip late in the year, it has been on the rise ever since. The average for May was $1479 per 1000 bd. ft., a four-fold increase. Random Lengths’ Structural Panel Composite Price index showed a similar pattern, rising from $349 per 1000 sq. ft. in April 2020 to $1584 last month.

The unprecedented run-up in prices has affected everything from dimensional framing lumber to building products made with wood components, such as windows and doors. Increases have added nearly $36,000 to the cost of an average new home, according to the National Association of Home Builders (NAHB). A recent NAHB newsletter said the total cost to a builder for all lumber and manufactured lumber products to build an average single-family home was $16,927 in April 2020, and $48,136 a year later—that’s an increase of 184%.

A convergence of factors

Rising lumber prices can be attributed to a variety of factors, according to Random Lengths editor Shawn Church. In a telephone call, Church said everything from labor shortages and restraints in the supply of timber to low mortgage rates and a surge in remodeling have played a part.

“Demand has been driven by various factors going back to last April as the pandemic emerged,” Church said. “When it hit, the industry cut production sharply, anticipating a major setback in demand. But that didn’t really happen. One reason was that the industry was declared essential and construction was allowed to continue with only a few interruptions in a few cities and regions. The industry cutbacks really overshot the true demand, which proved to be resilient.”

Stuck at home because of the pandemic, consumers took their government relief checks along with money they had saved because of an inability to travel and poured it into their homes, Church said. The result was an unprecedented run on building materials at home-­improvement stores. At the same time, many Americans who had been living in cities in order to enjoy short commutes to work suddenly found themselves telecommuting. They realized they didn’t have to live in a cramped apartment or condo and could instead move to the suburbs where they would have more elbow room. That meant more buyers for single-family homes.

The problem was that some mills that had shut down early in the pandemic had not yet reopened, while lumber supplies in three out of four major North American growing regions remained tight. In western Canada, Church said, supplies were squeezed by a decades-long infestation of mountain pine beetles. In the Pacific Northwest of the U.S., a lot of timber was on federal land and off-limits to loggers. Only in the southern pine region of the southeastern U.S. are timber stocks on the rise.

Even the echoes of the Great Recession of 2008 are in play. When that housing bubble burst, the lumber industry tooled its mills to run at a lower level of production, and it just hasn’t managed to catch up.

“Really, on the supply side the industry milling capacity has not risen to an adequate level to meet the demand we see today,” Church said. “Demand for housing has really catapulted from a level of a year ago. At the start of 2020 we were at 1.2 million, 1.3 million housing units, and we’ve jumped to 1.6 or 1.7 million now. The industry simply doesn’t have the capacity to supply this level of demand.”

Dustin Jalbert, senior economist with Fastmarkets RISI, said by telephone that lumber producers last spring looked at unemployment figures and how sectors of the economy were faltering. They thought back to the housing fallout in 2005 to 2009 and acted accordingly.

“They curtailed and cut production pretty heavily in April and May, thinking demand would fall, and that never happened,” he said. “Instead, it sort of surged. A lot of wholesalers and distributors sold off their inventory; liquidated. So, the whole supply chain is really, really lean for wood and it’s creating all this chaos and volatility. Basically, demand is the opposite of what everyone thought.”

How have builders responded? NAHB took a look at this question last spring as it conducted its NAHB/Wells Fargo Housing Market Index survey. The most common reaction, from 47% of those responding, was to include a price-escalation clause in sales and construction contracts. Another 29% pre­ordered lumber, and an additional 22% sought lumber-price guarantees from their suppliers. Just 13% of the respondents said they were doing nothing.

While builders often were successful in getting suppliers not to bump prices, most guarantees ended in less than a month.

Pioneer Builders, a spec builder of high-end homes in Washington state, has found that buying materials well ahead of when they will be needed has helped. In addition to working with its lumber supplier over the years, the company last year bought enough lumber to build a house and had it delivered on the “off chance” that there would be shortages down the road, said company vice president Bryan Uhler.

“That was a good move as far as lumber prices go, although we didn’t see the possible shortages here,” Uhler said in an email. “Now we’re doing the same thing—buying a house of material ahead of the supply shortages that we may face. As long as fiscal policy remains as it is and the Fed stays on their track, prices will not come down, they will only get worse.”

Not all builders are in the position to buy a house worth of lumber and put it away, and homeowners facing quickly rising home costs may be priced out of the market. With those worries in mind, a block of 36 industry groups in March appealed to U.S. Secretary  of Commerce Gina Raimondo to look into the lumber supply chain, identify the causes for rising prices, and “seek immediate remedies that will increase production.”

“Home builders and construction firms that have signed fixed-price contracts are forced to absorb these crippling increases in materials prices and costly delays in deliveries; there is a significant risk that many of these firms will be forced out of business,” the letter said.

Raimondo met with NAHB officials again in late May, according to NAHB.

Some builders change their habits

Higher prices have prompted some builders to rethink the way they build houses.

“Lumber prices are crazy at the moment,” Steve Knapp wrote on Green Building Advisor’s Q&A forum. “Standard Zip is [well above] $50 a sheet in some areas. So I was wondering how builders are adjusting. Are you moving to other materials such as glass-fiber sheathing, which seems to be a cheaper alternative to Zip or exterior plywood?”

The question solicited dozens of replies. Malcolm Taylor, for example, suggested that more builders would start adding bracing to walls and eliminate sheathing altogether. That wouldn’t be permitted in seismic zones, but some production builders already are doing that.

“I’m in the middle of framing two 900-sq.-ft. commercial workshops that rely on let-in bracing and use horizontal strapping for the walls and roofs,” Taylor said. “That is saving about $7000.”

Some suggested insulating concrete forms (ICFs) might start to look more appealing as lumber prices rise, even if foam and concrete have higher environmental price tags.

And then there came this comment from Kye Ford: “I have solved the crazy increase in lumber prices by not building. There is only so much I can pass on to a future homeowner, and most of the price increases will have to come out of my bottom line. It’s too risky to build specs right now.”

Where will it end?

Uhler, like Church, has seen ups and downs in the market before. “We’ve also been in business since 1978,” Uhler wrote, “so we’ve been through the booms and busts. The boom always leads to a bust.”

Jalbert said that lumber production in the southeast is a bright spot, and that softwood coming in from central Europe and parts of Scandinavia will help relieve some supply shortfalls. But over the short term, the market fundamentals that have driven up prices are not likely to change dramatically.

“My best guess right now is that in the next few months we are going to see prices continue to rise,” he said. “I do think when you get into the latter part of summer and into fall, seasonal demand will start to trickle down, and buying by distributors will slow down. That will be the beginning of a price correction. But I don’t think we’re coming back to $300 or $400 per 1000 bd. ft., at least not in the next year or two.” 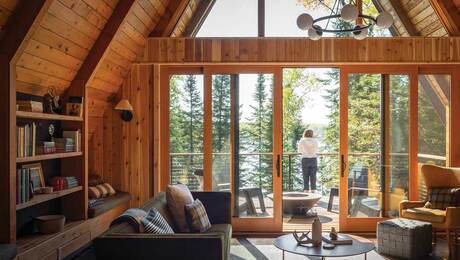