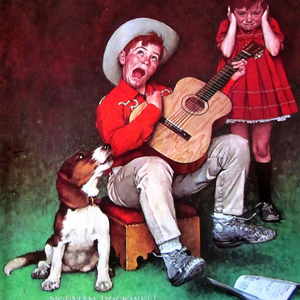 This 32’x15′ deck is on a slope. It’s held up on the downhill side by 2×8 joists resting over a 6×10 beam, which is supported by two sets of branching posts made of 6x8s. At the house side the joists enter the house, resting on the top plate of a cripple wall and nailing to the floor joists for the floor above.  I guess that’s technically ‘cantilevering’? I’m not sure. There are no other deck attachments: beam sitting on posts, and house. (See pic.)

This side of the house gets constant driven fog and drizzle, and pretty much the entire cripple wall suffered extensive rot and dampwood termite damage. I’ve supported the floor joists with a bracing wall.

I want to change the way the deck is supported at the house, either to a ledgerboard/brackets arrangement or a freestanding deck.

If the ledgerboard, I’m curious if that could be done more easily than by dismantling the deck. Of course the deck joists can be supported temporarily on a beam/posts from the ground, with diagonal bracing to keep the thing from collapsing while the work is done, but when I try to imagine installing the ledger with all the flashing, with the joist ends already where they will end up, that seems iffy. Is there some ingenious way of having them sit politely an inch or two away until they’re wanted back in place?

A freestanding deck would be supported on footings close to the house footings, which I don’t know much about. Apart from ensuring the deck footings would be the proper size for the load, are there other issues to worry about? Is it call-an-engineer time?

Thanks for any advice! 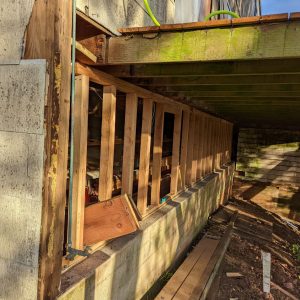 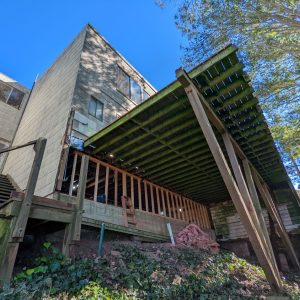