Water and termite damage, can u help?

I’m attaching pictures to illustrate the issue described below.

I live in PA and own a cabin in the Smokies of TN.  I’ve owned the cabin for 13 mos. When I bought the cabin I had a termite inspect and a subsequent treatment to treat an infestation. The main outter structure of the cabin consists of poplar logs. The floor joists were regular non PT wood. The person I bought it from was the “builder.” He took a lot of shortcuts and many were cost shortcuts.

Anyways, I decided to sell our cabin and last night the deal fell thru. The buyer waived a home inspect and termite inspect, but he had those services done anyways and the report came back that my house was “structurally unsound.” The reasons cited were termite infestations and significant rotting of floor joists and subflooring. This cabin has 3 levels: a lower crawl space, an unfinished “basement” area housing the water tank, furnace, etc, and the upper level which is the living space.  The cabin sits on a very steep slope. Of the 4 sides of the block foundation, the upslope side is entirely enclosed by backfil and the front porch built over it leading to the 3rd living space level.  I planned on finishing off the midsection to make a nice 1200 sq/ft game room which ideally makes my cabin more enticing for overnight renters. But I never did it yet because of the persistent musty/moldy smell and the fact that I am getting heavy seepage of water thru the block wall on the upslope side of the foundation. Black mold is growing on this wall and the water is running onto the subfloor rotting the subfloor and floor joists. The prev owner attempted to drylok the heck out of the wall to no avail, the problem persisted. At the time that I bought it I noticed this problem but had the rambo mentality that I will get the water problem fixed (I bought the place at a bargain price).

Since a year of ownership has passed the problem has worsened. I do not know how to stop the water problem.  The foundation is about 35 to 40 block high, so the upslope side of the foundation is buried in a very large amount of dirt. The rest of the 3 sides of the foundation are pretty much all exposed and there is of course no issues with any of those walls whatsoever. So I got one problematic wall that is destroying the entire concept I have of making a game room as it is making that midsection floor uninhabitable.

The termite issue is a nit, my treatment company warrants their work and they believe that what the buyers inspector saw was the evidence of the prior destroyed infestation. But if they’re back they warrant the work and I get treated again at no charge. The issue here for me is the water issue. What on earth can I do to solve this problem? All of the pictures attached are of the crawlspace area looking up to the subfloor of the unfinished section.

Once I solve this problem I plan to demolish the subfloor of the unfinished area and rebuild the entire subfloor and use Avantec and using PT floor joists since there is likely to be moisture in the crawlspace all the time.

I had the road to the cabin paved a year ago beliving this woiuld solve the water issue. A swale was made to redirect the water. But the slope apprarently is too steep and overruns the swale and still pours in under the front porch where it saturates the ground below that porch and then leaks into the basement wall.

ANY helpl is appreciated.

Well I”m trying to attach the files, I click attach files and it won’t bring up a window to let me attach them. If you want to see the pictures I can email them to you if you provide an email address to me privately.

If at first you don’t succeed, try using a hammer next time…everything needs some extra persuasion from time to time.  -ME
Reply 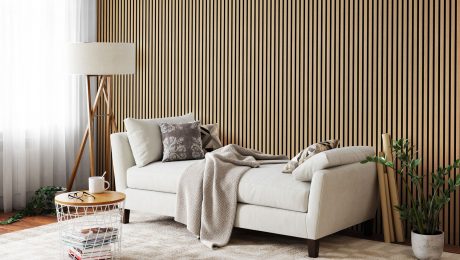 With felt backing made from recycled material, these wall panels from The Wood Veneer Hub combine aesethetics with practicality.