A masonry inglenook becomes the warm center of an architect's new house.

Synopsis: In this project, the author describes construction of a brick arch, including the design of a form supporting the bricks as the arch is built. A sidebar has tips for amateur bricklayers.

When Ed Allen and his wife Mary started thinking about designing their own house seven years ago, they knew they wanted something big and barnlike, yet New England simple and cozy. Ed, an architect, had been fascinated by domes, vaults and arches during his studies, but it wasn’t until the couple spent six months living in Liverpool during the winter of 1975-1976 that an inglenook became part of their house plans.

“We spent a lot of cold evenings huddled around a fire, trying to keep warm in an unheatable English house,” remembers Allen. “We kept sketching our ideas and dreaming about how we wanted to have a house where we wouldn’t be so cold.”

The sketches showed the influences of the English and Welsh houses they had seen, particularly of their visit to the Welsh Folk Museum at St. Fagan’s. This is where the Allens encountered the inglenook.

It is thought that the word ingle comes from the Gaelic aingeal, meaning fire or light, and was originally applied to open fires burning on primitive hearths. In medieval times, it came to mean a fireplace. The inglenook was a corner or a small room near the chimney where the family would gather before the heat of the flames. This became the central idea in Ed Allen’s plans, and the inglenook ultimately became the dominant design element of the house he was to build.

Allen spent a long time working out the exact dimensions of the inglenook, and was working on a 4-in. module. Then the house was designed around that, from the inside out. “I was always trying to keep it as small as I could,” Ed says, “but it kept growing as I made sure all the spaces around it were the proper size.”

The Allens’ inglenook is all brick, part of a 50-ton masonry mass that encompasses flues and fireplaces, and divides the house into two equal parts on each floor. The inglenook was designed to accommodate four or five people comfortably. The interior dimensions are 7 ft. 4 in. wide and 7 ft. deep from front to back, not including the fireplace.

According to Allen, it was all worked out logically — the dimensions of what he wanted things to be, plus the dimensions of the necessary brick. For example, the archway is 16 in. thick because the walls contain an 8-in.-square flue plus 4 in. of brick on each side.

To make the layout easier, Allen designed the brickwork to be modular, with 7 5/8-in. long bricks and 3/8-in. mortar joints, for an overall length of 8 in. Later he discovered that only about two-thirds of the assorted Full Range Belgian bricks he ordered were the right size. The rest were up to 1/4 in. too long. This required some cutting when he got to his closers, the last bricks in each course.

Mortar color and tooling can significantly affect the look of brickwork. Allen chose a standard dark masonry cement. On the horizontal mortar joints, he used a flat-joint finishing tool to make a weathered joint, flush with the brick at the bottom and cut back at the top. This joint casts a shadow on the mortar joint, accentuating the pattern of the brick. The vertical joints, however, are gently concaved.

For more photos, illustrations, and details, click the View PDF button below to read the entire article: 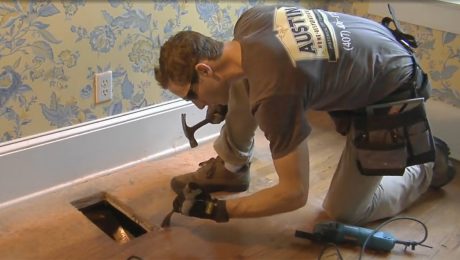 What to Look for When Buying an Old House

In this segment, the team gets into the nitty-gritty of what to look at first when inspecting an old home.