Convert wasted attic space into a bed that has drawers, bookshelves, and a vanity.

Synopsis: Vancouver designer and builder Tony Simmonds describes a project in which he built a bed alcove for his daughter with drawers and shelves in the space beneath a steeply sloped roof. It’s an attractive project that makes use of space that would otherwise be wasted.

When the middle one of my three daughters grew too old for the loft bed I built for her, the youngest, Genevieve, was happy to inherit it. The loft is in a small bedroom on the second floor of our house in Vancouver, B. C., Canada. Like many second floors of old houses, this one is really a half story, with sloped ceilings where the rafters cut across the intersection of wall and roof. The bedroom has only about 80 sq. ft., so its bed had to be on a raised platform to leave space for a dresser and a desk below.

Soon after she moved into the loft, however, Genevieve started bumping her head on the ceiling over the bed. When she eventually moved the mattress to the floor, I knew it was time for the old bed to go and for a new one to take its place. The bed alcove shown in the photo in the PDF was the result.

The kneewalls that defined the sides of the room had originally been a little over 6 ft. high, leaving a great deal of wasted space behind them. I proposed to recover this space by moving the kneewall over 4 ft. to accommodate a 3-ft.-wide mattress and a bedside shelf beyond that. Given the 12-in-12 pitch of the roof, this would bring the ceiling down below 3 ft. at the new kneewall. Would this be claustrophobic? To answer the question, I mocked up the space with packing crates and plywood to make sure there would be room to sit up in bed. A high ceiling is not a necessity over a bed—within reason, the reverse is true: A lower ceiling increases the sense of shelter and enhances the cavelike quality humans have always favored. Furthermore, a bed in an alcove that can be closed off from the rest of the room has qualities of privacy and quiet that are difficult to achieve in any other way. To get that extra layer of privacy, Genevieve and I decided that her bed alcove should have four sliding shoji screens.

The 9-ft. length of the space would provide room for a dresser and a vanity of some sort, as well as the bed. Drawers underneath the platform would triple the existing storage space. Light and ventilation would come from an operable skylight over the bed.

I had some misgivings about the location of this skylight in spite of the obvious benefits it would confer in terms of light and space. Having never slept directly under one myself, I didn’t know whether a skylight so close to a bed would make sleep difficult. But in the end I was seduced by three arguments. First, the skylight would face north and therefore would not be subject to heat-gain problems; second, it would illuminate the shoji from behind; and third, there was the emotional pressure from my client—some drivel about the stars and the treetops and falling asleep to the sound of rain on the glass. 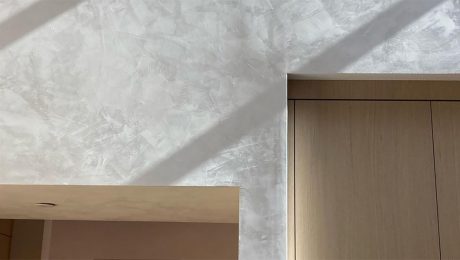 In this Q&A, Polly Doolittle talks about how she learned the craft of plaster veneer and dives deep into the materials she uses in people's homes.

View All
View All Attics Articles
Shop the Store