The kind of ducts you use and the number and types of turns they make dramatically affect HVAC-system performance.

Synopsis: Ductwork has a dramatic affect on how well a heating and ventilation system works, as the authors explain in this article. They discuss rigid-fiberglass, metal, and flexible varieties.

Think of air whooshing through ductwork as people rushing to work on a freeway. It doesn’t take an accident to slow things to a crawl. Get thousands of cars traveling together at 60 mph, and watch what happens when the road curves.

Now suppose the highway has a 90° turn in it. Or picture an abrupt T-intersection where everyone must decide which way to go. Or think what would happen if one lane disappeared or if the road were filled with ruts and bumps.

Elbows, turns, and intersections in ducts have the same effect on air. Every time there’s an exit, the air slows down. Whenever there’s a hill, air molecules pile up on each other and slow down, spreading the effect back down the line. If the ductwork is flexible, the ribs in the duct slow the air movement, just the way bumps in a road slow traffic.

This resistance is called static pressure. The type of ductwork that you use, the smoothness of its interior surface, and the number and severity of the turns and reductions the ducts make create this resistance. If ductwork is the appropriate type and size, and is as straight as possible, air moves with less resistance, and the air-delivery system performs better and with greater energy-efficiency.

Although it’s not possible to install all straight runs of round metal ductwork—which is the most effective method of moving air—it is possible to keep resistance to a minimum. One way to do that is to discourage contractors and homeowners from installing flexible duct.

Every straight foot of flex duct is equivalent to 2 ft. of rigid, which means the static-pressure penalty is twice as great with flexible duct. That’s because the inside surface of flexible duct has the same effect on air as a rough road has on traffic. Add all the curves, uphill climbs, and exits to a flex-duct system, and you can understand why it’s difficult to get the performance you need from flex duct.

Originally designed to make short, vibration-dampening connections between branch ducts and register boots, flexible duct is now improperly used as an alternative to rigid ductwork. It is an attractive product. It bends easily (hence the name), goes around corners, and travels up and over joists. It’s inexpensive, installs quickly and easily, and is available covered with insulation and a vapor barrier.

Even when used appropriately, however, flexible duct should be used as little as possible in air-delivery systems. And in reality, flexible duct often is not used appropriately. For instance, cramming it into a tight corner results in drastic airflow reductions. It is tempting to stretch flex duct too far. If it is, the strain may eventually cause the nylon straps that hold it to give way, resulting in a disconnection. If the disconnection is in an unheated attic or crawlspace, it might go unnoticed, which would mean a lot of warm, moist air pumped into a cold space. The outcome could be condensation, moisture, and rot. 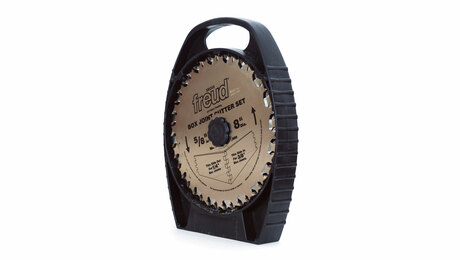 Freud's 8-in. Box Joint Cutter sets up faster than a dado-blade set and cuts precise groves and box joints in two sizes.