Safety is an attitude

Home building and working with power tools are inherently dangerous, especially if you have not been trained adequately. However, accepting the fact that accidents will occur and that you will get hurt is something I just don’t agree with (FHB #180, “Letters,” p. 10). If this is the attitude you have, you probably will get hurt.

I work for a Fortune 500 company manufacturing home-building products. Working safely is a condition of employment. When someone violates an established safety rule, that person is terminated immediately. Why do we do this? Two main reasons. First, injuries cost our business real dollars. Second, and most important, is compassion. We want everyone to be able to go home at night to their families and then be able to come back to work the next day.

I’ve been with this company for more than 30 years now. I can remember a time when safety was rarely a consideration, and yes, there were many injuries. Changing our attitudes has taken a long time, and we are still on the journey to being a totally accident-free company. I’m convinced we will get there. Readers of this magazine must believe they can work injury-free to make it happen. It’s an attitude, a culture change; it can happen if you want it to.

Railings must be sturdy

The article “Build a Chinese Railing” (FHB #180, pp. 76-77) was interesting. However, the last paragraph detailed using turn buttons to secure the “remarkably sturdy” frames to the porch. The IRC requires fastening to resist 200 lb., plus a safety factor, not just “remarkably sturdy.” In a restoration, that might not be an issue, but in any new construction, it most certainly is. As a deck and porch builder, I know that detail would result in a failed inspection in many of the jurisdictions we build in.

Author Scott McBride replies: Good point. One way to address this concern would be to make the wooden grillework fixed and the bug screen removable, instead of the reverse, as the article describes.

Overbuilding is a waste

I just finished reading “A Solid Deck Begins With Concrete Piers” by Rick Arnold (FHB #180, pp. 44-49), and I am appalled at the overdesign and consequent high cost. After noting that the two piers in the middle carry twice the load of the corner piers, Arnold determines a required diameter of 10 in. However, he jumps to a 12-in. tube: “For just a bit more concrete, I ensure the pier is well designed.” In truth, it is overdesigned by 44%, considerably more than a bit where I come from. While noting that the corners bear half the weight, the same-size tubes are used “to simplify the work process.” I find it easier to dig and fill holes for 8-in. tubes rather than 12-in. tubes.

The bottom line is that two 8-in. tubes on the corners and a single 12-in. tube in the center would have met the code, which already has plenty of overdesign. That would result in less than half the concrete, three holes rather than four, and two of them would have been smaller. Because most of the material cost in this foundation is in concrete and most of the labor is in digging out for the concrete and mixing the concrete, I can assume only that the homeowner paid about twice as much for this overdesigned foundation.

Author Rick Arnold replies: Having been involved in a number of projects in which overengineering substantially added to the costs, I understand your feelings. However, this is not the case here. To increase the size of a 3-ft.-long 10-in. pier to 12 in. costs $1 extra for the tube and $5 more for the concrete. It takes about an extra five minutes of labor to scrape a couple more inches from the sides of the hole and another five minutes to mix and pour the extra concrete. Overall, I may have spent an additional $50 in materials and 45 minutes to an hour more in labor. Comparing that with the overall cost of about $5,000 for the deck, I would say it’s rather minimal. The variable in all of this is truly knowing what the bearing capacity of the soil is. Even seasoned builders or excavators could give you only a good guess at it, and around here, the cost of getting a compaction test is much more than the extra I spend to ensure that my $5,000 deck doesn’t go south on me.

You got the name wrong

Your article “The 25 Most Important Houses in America” (FHB #179, pp. 58-67) was informative, concise, and enlightening. But the architect of the solar spec house was William Lumpkins, not Walter Lumpkins. As a young architect in 1975, I visited Bill when he was working on this project. He was a kind, gentle man who practiced as an artist and produced architecture with tenacity and spirit in his native New Mexico.

We need third-party testing of homes

Tedd Benson’s essay “A dismal standard” (FHB #179, p. 8) was precisely on target. New-home buyers think they are protected by building codes and assume that the homes they are buying are durable and energy efficient. Generally, nothing is farther from the truth. A very real market shift has to occur before quality homes can be ensured. Homebuyers must insist on a systems approach and on testing of the final product by a qualified third party.

The State of Wisconsin has made headway in legislating Wisconsin Energy Star homes for new building and Home Performance with Energy Star for existing homes, and also in training qualified consultants in testing. Thankfully, Wisconsin has many builder and trade allies in our programs that recognize the value of these services.

No guard, no job

I found your article “Avoiding Accidents on the Tablesaw” by Gary M. Katz (FHB #180, pp. 86-91) to be a prescription for having an accident. How can a safety advocate recommend the removal and modification of a saw guard? Good grief, it’s hard enough to keep my guys working with the guards on without someone advocating their removal. Although I realize I own a large commercial shop, it seems to me the principles for safety are the same for the guy who operates a tablesaw in his garage. In the words of Mr. Trump, “You’re fired!”

Author Gary M. Katz replies: My article wasn’t about using tablesaws in a shop environment, where truly effective overhead guards can be used (those overhead guards are a modification, too, by the way), along with dust collectors and aftermarket riving knives. In my shop, I use those devices on my Powermatic tablesaw. But they’re not available for portable tablesaws, and even if they were, carrying them out to job sites and then setting them up would be cost prohibitive.

I agree with you that it is dangerous to remove or modify the guard on your tablesaw. But the reality is that 99% of carpenters in the field use their portable tablesaws without guards. That poses a real problem. Do I insist that everyone use a saw guard and leave it at that? Or do I accept that most carpenters won’t use a saw guard and try to offer some worthwhile advice for working more safely without the guard? I chose to do the latter. Besides, if I were going to be truly dogmatic about it, I would insist that everyone buy a tablesaw from SawStop (www.sawstop.com). 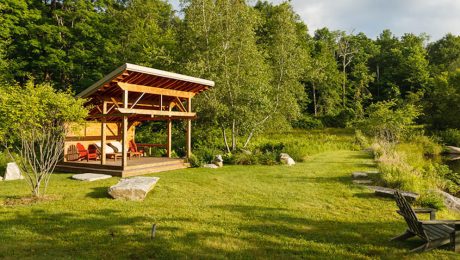 Budgeting for Your Landscape Design

Four landscape architects and designers share their tips for getting your dream landscape on a budget and how to communicate well with a designer.