Call me grumpy, but the cover story of your most recent issue (“Careful Layout for Perfect Walls”; FHB #156, pp. 52-57) sent me over the edge. The biggest lie in the world of construction appears in bold print: “Equal diagonal measurements mean a square layout.” This misconception is probably the main reason that so many framing jobs are out of square. This rule works only if the opposite walls are absolutely equal in length. If the opposite walls are not equal, you will create a perfect regular trapezoid and guarantee that not one of the corners will be square.

—Joe “Been there, done that” Klocek, Overland Park, Kan.

It seems to me that Mr. Schweiger’s desire to support a deck without attaching it to a house is potentially dangerous (FHB #156, “Questions & Answers,” p. 20). Typically, post/beam and post/base connections have very little shear value. Once the deck is disconnected from the house, there is little to prevent it from collapsing like a deck of cards. A deck crowded with party guests may have hundreds or thousands of pounds of live load on it, and any collapse could lead to tragedy.

In addition to the suggestions John Spier makes, the deck should have diagonal bracing in all four directions.

In seismically active areas such as Southern California, it is doubly important to provide for the lateral/shear forces that develop. If the deck is more than a few inches above the ground, the dollars spent for structural-engineering input are dollars well spent.

John Spier replies: You make a good point, one that I should have addressed. The decks that I’ve repaired as I described in my answer to Mr. Schweiger have been at ground level and also have wrapped around several sides of the houses to which they were attached. Any elevated deck needs to be braced adequately, even when it is attached to the house.

Be careful of long hair

Once again, I see a photo in your magazine of a person with long hair hanging out (FHB #156, p. 52). In subsequent photos, the hair looks like it is better tied. Back when I had enough hair to wear shoulder length, I was helping my dad with an addition on my folks’ cabin in northern Arizona. Usually I tied my hair back well enough, but one morning, I forgot. I stepped out after breakfast and began to drill joists for a water line with a spadetype drill bit. I was bending over, and my hair got caught. I ended up cutting my ear badly before the drill stopped, and obviously, I could have received yet another hole in my head. To make things worse, my mother was there, if you can imagine. Please warn your readers and your contributors about this danger.

Mark McInturff is correct in that many zoning regulations are poorly written (FHB #155, “Taking Issue,” pp. 6, 8, 10). This is probably a comment on poor work by some planners rather than an indictment of all planning and zoning commissions. I note that he invokes Colonial Williamsburg as a model of a “lively, mixed-use streetscape.” Williamsburg is a joy to visit, but it did not just happen. As it sits, it is one of the more planned (read “zoned”) communities in the world.

I agree with Mark on so many points (FHB #155, “Taking Issue,” pp. 6, 8, 10), but his fundamentalist approach needs to be reined in a bit. And he needs to get himself involved in some committees to educate the general public. We have a large population of people who don’t see the importance of participating and making their voices heard.

I live and build in the world of daylight-plane envelopes, 27-ft. height limits, 30% lot-coverage limitations on million-dollar, 7000-sq.-ft. lots, basements limited to 61⁄2 ft. to discourage using the space for anything but storage, etc. The local governments in Northern California try to outdo each other when it comes to creating outrageous building restrictions.

My reason for writing is to say that I think your “Taking Issue” essay, “Why I hate zoning regulations” (FHB #155, pp. 6, 8, 10), is right on, and I would like to send a copy to all the government officials in this area who are “looking out for our best interests.”

The article “Repainting a House” by Jon Tobey (FHB #154, pp. 84-89) offers welldocumented suggestions for spraypainting. But one of the most critical issues in spray-painting is completely absent: dilution of the paint for optimal application with spray equipment.

Jon Tobey replies: Modern airless equipment precludes the need for thinning paint. Only an unscrupulous painter would thin paint in these applications. In fact, one of spraying’s major advantages is that it results in a film coating at least twice as thick as brushing does.

On the other hand, an HVLP (high volume low pressure) system, used for stains and fine finishes such as automotive painting, does require thinning, but that is a completely separate approach.

I enjoyed Dave Crosby’s excellent article “Plumbing Under a Concrete Floor” (FHB #156, pp. 60-65). However, the article perpetuates a common misconception about the slope of drain lines when it states “…much steeper [than 1⁄4 in. per ft.], and the liquids outrun the solids, leaving them high and dry.” I have heard this myth numerous times over a 30-year engineering career, but it has no basis in fact.

Civil engineers design sewage-collection systems based on Recommended Standards for Wastewater Facilities, which is more commonly referred to as “the 10 states standards” because it was originally sanctioned by 10 Great Lakes and Upper Mississippi states along with the province of Ontario. Today, this standard is used throughout the country. In paragraph 33.41, the standard reads: “The following are recommended minimum slopes which should be provided; however, slopes greater than these are desirable.” This same recommendation is echoed in the National Plumbing Code. The only concerns about steeper slopes have to do with proper venting and the security of the drainage pipes by assuring proper bedding and support due to the forces from higher velocities occurring within the pipe—nothing about water outrunning the solids.

The best recommendation is to hold to Mr. Crosby’s minimum slope of 1⁄4 in. per lin. ft., which yields a velocity of 2 ft. per second, but where possible, lay the pipes at the steepest practical slope. Clogs and obstructions are a result of flat pipes, not steep ones.

A caution when you’re refacing fireplaces

I’d like to offer a word of caution with regard to zero-clearance fireplaces (FHB #155, “Drawing Board,” p. 42). In my job as a chimney sweep, I see homeowners expending a great deal of effort and money on refacing zero-clearance fireplaces only to end up with a great-looking new facade on a fireplace that should no longer be used (for gas or wood) because the manufacturer’s certified installation requirements have been overlooked. All of these units are tested to a standard and are listed products. Failure to follow the instructions precisely for the specific unit could be a fire hazard, especially when raising the hearth or covering any of the air-circulation vents. If you no longer have the manufacturer’s instructions for your fireplace and can’t track them down, it may be helpful to contact a chimney professional who has been certified by either the Chimney Safety Institute of America (www.csia.org) or Wood Energy Technology Transfer Inc. (www.wettinc.ca).

In defense of the bookcase article

OK, so Gary M. Katz’s bookcase article (FHB #154, pp. 64-69) may not be “fine” in the cabinetmaking sense, but it is the distillation of years of experience, and that is what I read Fine Homebuilding for. Traditional cabinetry is a luxury and a pleasure, but most people want practical designs, something that is built efficiently (reducing labor costs) from good-looking but realistic materials. Cutting traditional joints will undoubtedly provide a level of satisfaction for the builder, but with rare exceptions, this will not be appreciated by the client, who has to foot the bill. I would like to thank Gary for sharing the benefit of his years of experience.

A clarification on Sturd-I-Floor plywood 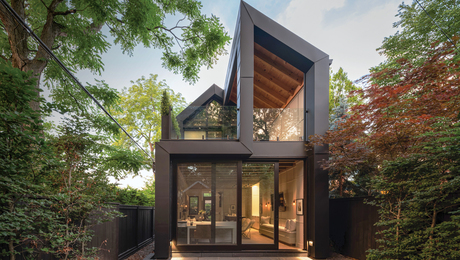