In the Dec/Jan 2009 issue of Fine Homebuilding (#200), I reported on a new code that requires fire sprinklers in all new one- and two-family homes and town houses. The code appears in the 2009 IRC, but doesn’t go into effect until the start of 2011.

It’s a heated issue
I just spent several months researching and writing a feature story on fire sprinklers for our Oct/Nov 2009 issue (#206). The article explores the myths and facts of residential systems, how they work, how much they’ll cost, who will install them, etc. It doesn’t get into the debate that’s flared up (sorry), however, which—from what I can tell—is pretty intense.

Money or life? Hmmm…that’s a tough one
So the whole purpose of fire sprinklers is to save lives. Duh, I know. But I have to make the point because there are people out there who think otherwise. And there are many who are passionately opposed to the new requirement, so much so that they’re spending a lot of time (and by spending I mean lobbying and by time I mean money) trying to block the code from being adopted. Why, you ask? To be honest, I’m wondering the same thing. And my guess is money.

Those who oppose the mandate say they’re concerned about the potential of pipes freezing in colder climates, damage from accidental discharge of sprinkler heads, and the availability of adequate water supply in homes served by well water. Let’s take a look at those arguments…

Frozen pipes?
I think most of this concern relates to a standalone system, which is a system of piping separate from the home’s plumbing. The water in these pipes is stagnant until a sprinkler head activates. OK—stagnant water is more susceptible to freezing than moving water (backflow valves are required to prevent contaminating the water supply). But what are the chances of water freezing in a heated home? And don’t we take precautions in new construction to protect all piping from freezing? An alternative is multipurpose systems; the piping in these systems is part of the home’s cold-water line, often made of PEX (which is less susceptible to freeze damage), and the water’s always moving.

Concern about frozen pipes is a lame argument.

Accidental discharge?
Sprinkler heads are activated by heat. High heat. Like the kind that isn’t likely unless there are flames present (155°F-175°F, depending on the type of head). So only the head(s) closest to the flames actually discharge water. Research shows that chances of an accidental discharge due to a defect in the sprinkler head are 1 in 16,000,000.

Well water?
The NFPA 13D (the National Fire Protection Association’s residential-sprinkler code) requires enough water for two sprinkler heads (which use about 26 gpm combined) to discharge for 10 minutes (for homes over 2000 sq. ft.; it’s 7 minutes for smaller homes). Achieving that volume can be accomplished by a pressure tank(s), a bladder tank(s), a storage tank(s), a cistern, a well equipped to draw that amount—or a combination of these.

It’s gotta be the cost
Most people—including those opposed to the code—get wound up about the cost. Money’s tight all around these days, for sure. So I’ll concede to the concern here. But the cost is much less than you probably think. Costs can range quite a bit around the country, from 87¢ to $4 per sq. ft. (materials and installation). The average is about $1.50 per sq. ft., which typically comes out to about 1% to 2% of total construction cost. So, in keeping with averages, having a fire sprinkler installed in an average 1500-sq.-ft. home will cost about $2250.

Now, consider that fire sprinklers and smoke alarms combined reduce the risk of death by 82%. And in the 20 years that Scottsdale, Ariz., has had fire sprinklers on the books, no one has died from a fire in a home equipped with sprinklers.

What do you think?

Sprinkler head manufacturers offer different styles, including the flush  concealed head shown here. The sprinkler head is recessed and covered by a plate that sits flush with the ceiling. When a fire starts, the plate falls away and the head drops down. 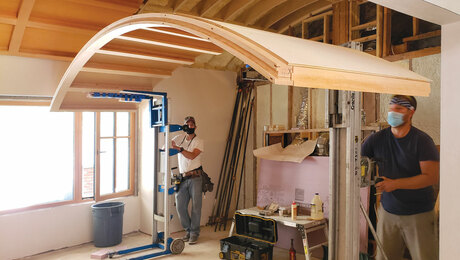 One-Stop Woodshop for a Cohesive Look and Feel

Sometimes it makes sense to have one company handle all the woodwork for a project, from fabrication to installation