An Elegant Kitchen on a Budget

Synopsis: When designer/builder Alex Nerland showed his wife a dilapidated two-unit building he had just visited, she said that they had to buy it. Nothing in the building had ever been renovated, so the couple could start with a blank canvas. They decided that they would move into the upper unit, where the kitchen was buried in the back and the front contained a parlor and a “fainting room” — a feature peculiar to Victorian houses. One of their key decisions was to move the kitchen to the front of the house. For less than $10,000, they outfitted their new kitchen with a six-burner range, granite countertops, a refrigerator, a dishwasher, an oven hood, and various lights and fixtures. They looked for bargains online and at local big-box and outlet stores. Ultimately, they transformed a three-bedroom/one-bath flat into one with four bedrooms and 2-1/2 baths, and they grouped the living areas in the front and the bedrooms in the back.

My wife and I didn’t really know if we were looking for a house project, yet there I was, touring a bunch of properties toward the end of 2008 with a real-estate-agent friend of mine. When I walked up the stairs of one particular two-unit building, I was blown away by the Victorian facade, the 12-ft.-tall ceilings, and the incredible amount of work it needed. The brick foundation was in terrible shape, to the point that the central post supports looked more like a Jenga game in progress than actual supports. Every wall in the upper unit had to be scraped, sanded, and replastered. The downstairs toilet flushed into the garage, and most of the walls had fist-size holes or bigger. There was even a 120-lb. pit bull prowling the backyard.

It was beyond what I thought I had energy for. I showed it to my wife, though, and she said that we had to buy it. The plus side, Lisa said, was that no room in the building had ever been renovated, so we could start with a blank canvas. After all, you can’t simply add 12-ft. ceilings to a project. What we could add was sweat equity, our own sense of design, and a willingness to hunt down bargains on fixtures and building materials that would make the project economically feasible for us.

Besides the obviously poor condition of the building, there were big problems with the floor plans of the two flats. We planned to occupy the upstairs unit, where the kitchen was in the back, the dining room was in the front, and that mythical chamber peculiar to the Victorian house — the fainting room — was too small to be used as anything other than an office.

Flip the plan into the 21st century

Our revised plan for the upstairs flat takes the kitchen out of the back of the house, where the Victorians tucked them behind closed doors, and places it right in the heart of the house. It now occupies the dining portion of what had been half of the double parlor. To unify the reconfigured common living area, we took out the big pocket doors that closed off the two parlor rooms and annexed the fainting room to make it our new dining room.

We converted the hall closet, along with about a third of my son’s too-deep closet, into a powder room. We also rerouted the hall through what would be the new kitchen. This yielded enough usable space to carve out a laundry room and a closet in the old hallway. The final stroke was to convert the old kitchen into the master bedroom and to rebuild the old sunporch into a spacious-feeling master bath.

Ultimately, we transformed a three-bedroom/one-bath flat into one with four bedrooms and 2 1⁄2 baths, grouping living areas up front and four bedrooms together in the back. The new plan wrings maximum utility out of every bit of our 1900 sq. ft. 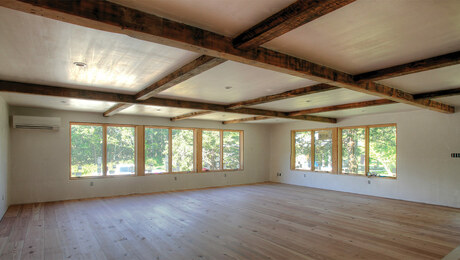 View All
View All Kitchens Articles
Shop the Store