Patrick’s Barn: The Hydrangea Is on Life Support

It was late morning Saturday, October 29, when the heavy, wet snow started falling. By about 1:00 there was enough on the ground to gather a handful into a good snowball. About an hour later, our power went off. An hour after that, we heard and saw mature trees breaking up all around us. It’s Wednesday, November 2, as I write this, and we’re still without power. The utility says we might have power restored by Sunday.

As the snow started falling, I was keenly aware of a long oak branch overhanging our new barn. When it started bending under the weight of the heavy snow on its fall leaves, I was sure it would hit the barn’s new roof. I just happened to be staring out the window when it fell. It seemed like a miracle when, instead of dropping straight onto the roof, it stayed attached just long enough that the free end swung down like the whole branch was pivoting on a hinge. It missed the barn by about a foot, and I breathed a long sigh of relief.

In addition to several large, broken oak branches, our landscape’s most notable victim was a 40- or 50-year-old hydrangea that was uprooted and toppled over. It’s our landscape’s best feature. Its many beautiful blooms last for months and change color as the summer turns to fall. I was quite prepared to drag the sad wreckage to the brush pile, but my wife decided it deserved better treatment. Sunday afternoon as she cleared the foliage and removed the dead and broken branches, she convinced me that we should at least try to save the plant. Thanks to her, it’s back upright, and we’re hoping for the best. If anybody knows of additional measures we should take to save our beloved plant, we’d love to hear your input.

Read more about my barn here.

This was our beloved hydrangea Saturday after the heavy, wet snow leveled trees and power lines throughout our town. The local utility says that 90% of customers were without power. We're still expected to be without power a week later.

The mature oak trees in my yard were also victims of the storm. About six very large branches broke free after being overloaded with snow on their still-attached fall leaves. They now need to be cut and cleaned up.

After clearing nearly all the foliage and broken branches with pruners and a recip saw, my wife and I lifted the tree back into place. Had it been a pound heavier, I don't think we could have lifted it. We secured it with a pair of ropes and a 5-ft. piece of 2x8.

I like using available materials whenever possible. Here I am using a piece of foam sill sealer and camo duct tape to protect the trunk from chafing when it's tied up with poly rope. 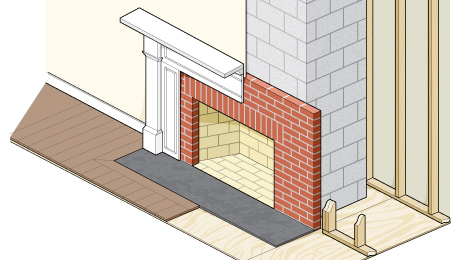 Avoid DIY disasters by following code-required clearances to combustibles, rules for hearth extensions, and trim-projection limits for elements above and beside the firebox opening.