How it Works: Standby Generators

Whether you’re trying to keep the water running during a power failure or the lights on and the air conditioner humming during a blackout, a standby generator can be an invaluable addition.

Synopsis: In this “How It Works” column, a companion to Sean Groom’s article, Standby for Power, (FHB#224), senior editor Rob Yagid looks into the way standby generators function. A control module monitors the utility power supply. When the sensor detects a disruption in power supply, the generator starts, and an automatic transfer switch changes the domestic power supply from utility to generator. When the sensor detects that the utility power is back, the transfer switch reconnects, and the generator shuts down. An alternator converts mechanical energy into electrical energy. Standby generators have either two-pole or four-pole alternators. A two-pole alternator typically produces electricity with an erratic current, but is generally available in less expensive generators. Four-pole alternators are more fuel efficient and typically much more expensive.

Whether you’re trying to keep the water running during a power failure or the lights on and the air conditioner humming during a blackout, a standby generator can be an invaluable addition. This issue, contributing editor Sean Groom surveys the range of generators available for emergency power applications and suggests the most appropriate use for each type of unit. 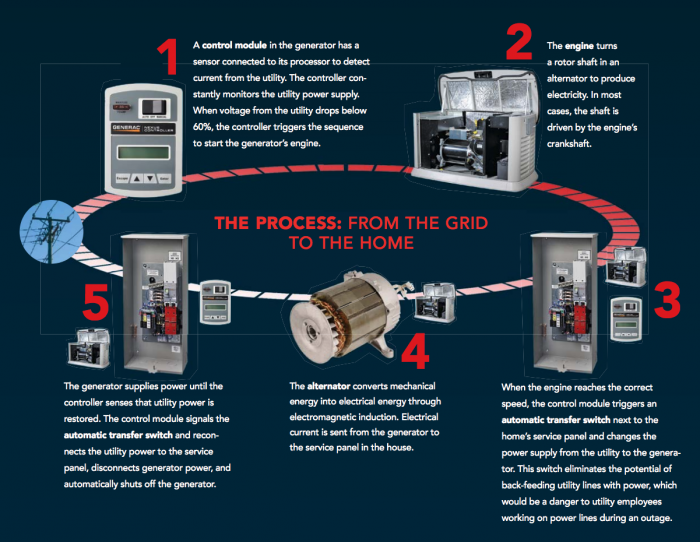 While the process of converting mechanical energy to electrical energy is largely universal in any type of generator, subtle differences in the operation of standby generators can affect their performance. To choose the most appropriate standby generator for your home, you first need to understand how it works.

The alternator: in detail

Alternators produce electricity through electromagnetic induction, which in the case of an alternator is the result of moving a magnetic field past conductive wires, also called windings. A magnetic field is created by electromagnetic poles in the rotor. A motor spins the rotor inside a stator, which houses windings and distribution cables. As the rotor spins, its magnetic field generates a flow of electrons in the stator’s windings. This electrical current is distributed through cables in the stator to the service panel in the house.

To generate electrical current at 60 Hz- the frequency at which residential electricity is delivered from the utility the engine must spin a two-pole rotor at 60 revolutions per second (3600 rpm). This technology costs less to build, but results in a motor that runs at a higher rate. It burns fuel more quickly and is louder than a generator that has a four-pole alternator. Because the motor has to run faster than those connected to a four-pole alternator, it has a shorter life span, but it should operate for more than 20 years with normal standby usage. Typically, two-pole alternators produce electricity with erratic current, which can lead to problems with sensitive electronic equipment, such as some high-end HVAC systems, computers, and high-quality TVs. However, some manufacturers like Generac, whose components are pictured in the PDF below skew their stators to create a more consistent electrical current with minimal cost difference.

To generate electrical current at 60 Hz., the motor has to spin a four pole rotor at only 30 revolutions per second, half as fast as a unit with a two-pole alternator. The engine can run at 1800 rpm, which makes it slightly more fuel efficient and quieter. Because less strain is placed on the engine, it has a longer service life as well. Typically, a four pole alternator creates electricity with a cleaner wave form than a two-pole alternator, unless it’s skewed, so it’s better suited to powering sensitive electronic equipment. Generators with four-pole alternators are typically large and much more expensive than two-pole units.

For more photos and details on standby generators, click the View PDF button below.