The job of the breaker panel is to distribute the incoming power to the separate circuits throughout a home’s electrical system.

The National Electrical Code (NEC) calls breaker panels, panel boards, a name given to the earliest whole-house electrical systems—including those with switches and screw-in, Edison-type fuses— which were mounted on wooden or asbestos panels.

By the mid-1960s, breakers had almost completely replaced Edison-type fuses in new construction, so the old panel-mounted fuse boxes gave way to the metal breaker panels that are still being used today.

Although the panel shown here is based on modern NEC requirements, older service/ main panel configurations may differ. That doesn’t mean your old electrical panel necessarily requires an upgrade. If an old panel meets code requirements appropriate for when it was installed, the workmanship was good, and the panel has been maintained, then an upgrade is not required.

The job of the breaker panel is to distribute the incoming power to the separate circuits throughout a home’s electrical system, and to reduce the risk of a fire if something goes wrong with the wiring. Here’s how it works.

Beneath the metal cover and beyond the wires and breakers, the design of your home’s main breaker panel is simple. Although configurations vary based on panel size, type, and brand, the basic components are similar.

The flow of power 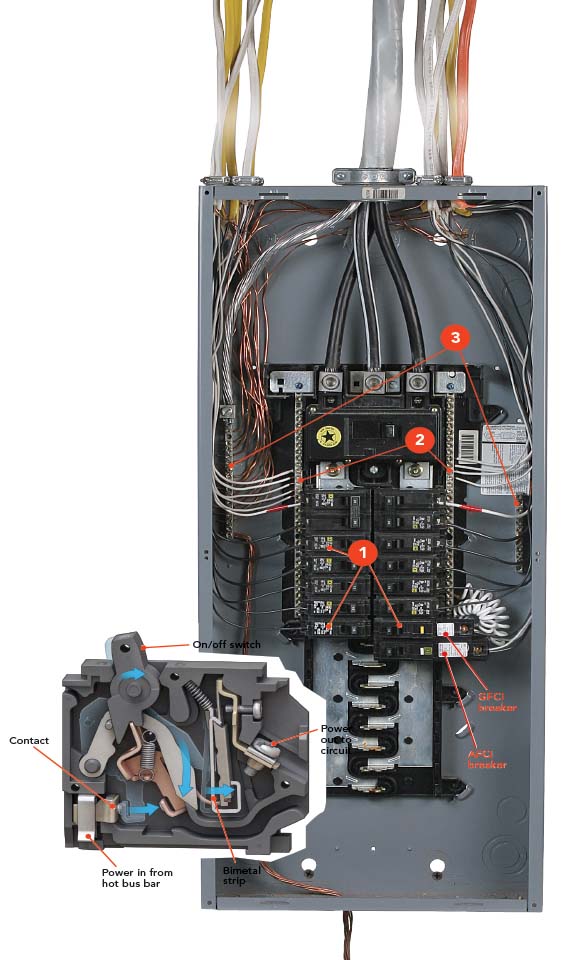 With breakers installed and wires connected, the panel is ready to receive power from the utility and distribute it through the house. Here’s how the components combine to make a complete system.