A Practical Approach to Passive House

An architect's "best work to date" is a super-efficient home that you could build.

Synopsis: Passive House standards are the strictest residential-building parameters in the United States. Because of that, details such as window selection and the continuity of a bead of caulk can make the difference between whether or not a house is tight enough to meet the standards. Architect Steven Baczek describes in this article how he built a Passive House with standard building materials and construction techniques. Key to the project’s success was lots of planning and buy-in from everyone involved: the homeowner, the architect, the energy consultant, the general contractor, and the subs. Together, they built a house that conforms to Baczek’s goal in building high-performance houses: They should convert energy as inexpensively as possible and hold on to that energy for as long as possible. Baczek provides detailed construction plans for the following tasks: building double walls (one 2×4 and one 2×6), insulating above the slab, breaking the thermal bridge at the second floor, using a vented truss roof, and detailing windows in thick walls. Baczek believes not only that this house is the best one he’s ever designed, but that it can be replicated by any homeowner, builder, or architect.

I began my career in architecture nearly 17 years ago after spending many years as a contractor. My background has given me a strong appreciation for and understanding of people who design and build homes. I’ve designed more than 30 zero-energy homes, six deep-energy retrofits, and numerous high-performance houses. In truth, the path to optimum performance and durability hasn’t always been easy.

In many ways, the knowledge that I’ve gained over the years has culminated in the design and building of this home — my first certified Passive House, in the coastal community of Falmouth, Mass. — which I confidently consider my best work to date. Not only am I proud of what we accomplished in this project, but I’m also proud of how we did it. My informed, organized team and I were able to build a comfortable and exceptionally durable Passive House with standard building materials and practical construction techniques — an approach that’s replicable for any homeowner, builder, or architect looking to build a cutting-edge house of comparable performance.

Passive House standards are the strictest residential-building parameters we have in this country, and hitting their performance target is a challenge.

Passive House isn’t for everyone, and there are some caveats worth considering. Passive House standards are performance-based, with no relevance to cost or aesthetics. Because of this, material and product options can be limited when compared to, say, an Energy star home. For example, we wanted to use insulated, triple-glazed wood windows on this house because of the way they looked, but when we modelled them with the Passive House software, we realized that they wouldn’t perform well enough. We opted instead for fiberglass Thermo-Tech windows that met Passive House standards but were different from what the homeowner had originally wanted.

Chasing the Passive House plaque is a goal that should be considered carefully and talked about throughout the design phase to avoid too much compromise. Initially, I think Passive House certification should be a goal written in pencil. If the client is interested solely in a very energy-efficient house and not necessarily the plaque on the wall, a house that reaches 80% or 90% of the standard is less costly to build and still far better performing than any typical code-built house in the United States. It’s even better than those houses that are built to other green building standards.

We were committed to the standard and understood that due to the limited number of comparable, exemplary projects, there was limited knowledge within the industry on how to construct a Passive House. Because of that shortcoming, our approach to the project had to be planned carefully.

Organized from the start

I’ve developed a simple two-phase philosophy when it comes to designing high performance houses: I aim to design a house that, when built correctly, converts energy as just a big plywood box, then they would be held accountable. Good subs welcomed the challenge and learning experience, and they delivered. That first test showed an air exchange rate of 32cfm at 50 Pa, well under our goal of 60cfm at 50 Pa.

For more drawings and details, click the View PDF button below: 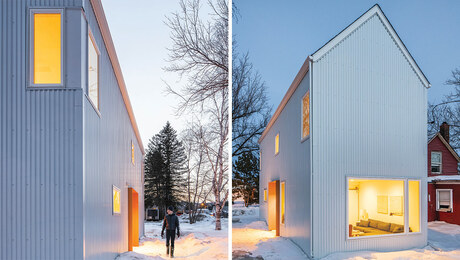