In his initial discussions with architect Tina Govan, the owner of FHB‘s 2013 editor’s choice award described the French farmhouses he had photographed and painted while traveling in Europe. The common features of these houses—simple gabled shapes, thick masonry walls, an attached barn or one nearby, and room for gardens, orchards, and a small vineyard–became the template for the house Govan designed for him, which is profiled in this article by editor at large Charles Miller. Govan created a two-story house with a largely open floor plan and an attached barn that will one day contain wine cisterns. The house is oriented for maximum southern exposure and is topped with a Galvalume roof that channels irrigation water to cisterns. Structural elements that are normally covered up—such as roof trusses—are exposed. The house’s thick walls are covered with plaster and built of autoclaved aerated concrete (AAC), a common material in Europe that hasn’t caught on in the United States, despite its many benefits (e.g., it’s rotproof, it won’t burn, it has an R-value of about R-1 per in., it can be shaped with woodworking tools). Years in the making, this house is designed to nurture its owner’s passion for the arts, cooking, and wine making. 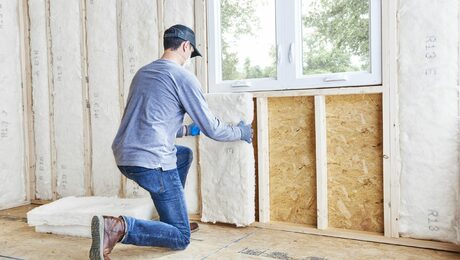