The need for special indoor conditions affects the shape and layout of a new build.

BEST NEW HOME: When the teams from Kaplan Thompson Architects and Thompson Johnson Woodworks were given the parameters surrounding this new build, they knew they were up for the challenge. What began with a program that included meeting a medical requirement, preserving museum-quality artwork, and managing storm water on-site resulted in the 2020 Best New Home Award winner: a high-performance house remarkable for its unconventional yet site-appropriate architecture.

My firm, Kaplan Thompson Architects, builds a lot of high-­performance homes—it’s familiar ground for us. But this project required something we had never encountered: The house needed to maintain higher than normal humidity to support the client’s physical health, and that stipulation became a key design driver. The homeowners also asked that we design for aging in place, which influenced some of our material selections. And because we wanted to work with the natural topography to manage stormwater runoff, the site itself helped to shape the house. Then there was the clients’ art collection to consider—we had to protect a significant painting from sun exposure, which influenced the location of some windows. It was clear from the onset that this was going to be a uniquely challenging job, but we, alongside builder Heather Thompson and her team, were excited to dig in. 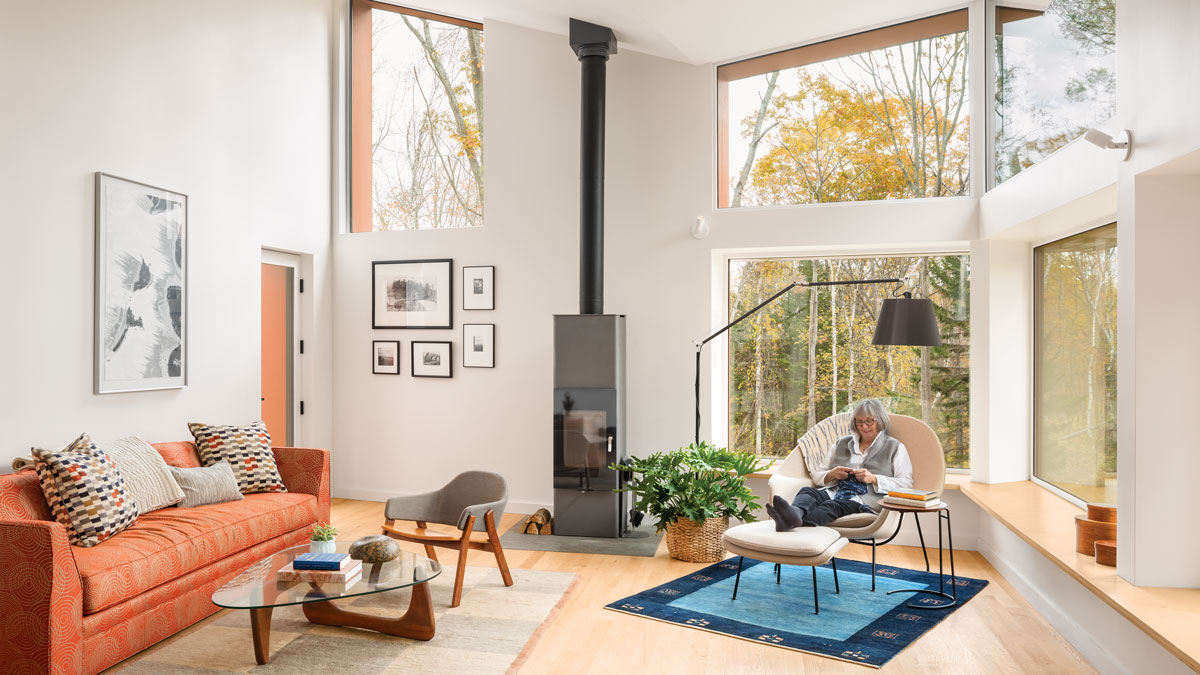 From experience, we know we can count on our builds being tight, and we know how to ensure air changes every three hours, but an increase in relative humidity meant rethinking the envelope. My project team, including Danielle Foisy and Sam Funari, and I had to determine what maintaining high humidity in the house year-round would mean in terms of moisture in the building assemblies. The mechanical engineer advised us to move all of the insulation outboard because the required interior vapor loads meant the structural sheathing needed to be kept warm so it wouldn’t be a condensing surface. We decided to leave the 2×4 structural wall cavity uninsulated so the 7⁄16-in. ZIP System sheathing—the primary air and vapor control layer—would stay well above the dew point even during the coldest months. We fastened 12-in. I-joists vertically outboard of the sheathing to create exterior insulation cavities, and used highly permeable VaproShield as a vapor-open water-resistive barrier (WRB) on the exterior side of the I-joists. With dense-pack cellulose, we reached R-43 in the wall assembly. It’s worth noting that the location of the ZIP System sheathing on the warm side of the thermal control layer doesn’t maintain the interior relative humidity at any given percentage, it just mitigates the risk of the walls getting wet.

This was a classic case of “form follows function.” The superinsulated thick walls coupled with the shading requirements for the artwork inspired a distinct building shape with lots of character. The architecture is straightforward but dynamic—there’s a lot of interest without complicated detailing. Effectively, the house is divided into two boxes; each has a simple span and a shed roof. The primary shed faces south and carries a 6.7kw solar array; the other faces north, where the bedrooms are located. A dormer sits at the end of the south corner.

We played with the dormer’s shape to give the house some spice. A true butterfly roof is not practical in New England because of snow loads, so we gave it the appearance of a butterfly roof from the end elevation.

The framing was a little different in that we essentially built two walls: an uninsulated standard 2×4 assembly, and outside of that a 12-in.-thick cellulose-filled I-joist frame, which hangs on the main frame and is non–load bearing. It’s effectively a Larsen truss, which is a nonstructural, typically site-built truss installed on exterior sheathing to hold blown-in insulation, but we used I-joists rather than 2x3s or 2x4s and plywood. The I-joists come assembled, so they’re fast to install. There may be a slight increase in thermal bridging with our assembly compared to that of a Larsen truss, but it required much less labor.

The extrathick walls provided an opportunity when it came to window placement. Even though the most energy-efficient window location is in the center of the wall, we knew we could get to net-zero using a mix of innie and outie windows, which we wanted for architectural interest. Putting the windows in the first-floor living area to the exterior meant we were able to incorporate a window seat. Above it we used innies, which work to passively shade the lower level—they are pulled in 16 in., so even though they are on the same wall, the juxtaposition gives the space depth.

Working with the landscape

The property has rocky terrain and is wet on the low end, which made for a tight build and meant we had to pull the house up to the road. At the rear, we built on board-formed piers to support natural drainage. We also liked the idea of the house floating above the landscape. Orienting it parallel with the slope discourages damming. As a result, the house has a thin street face, with a wide face running in the direction that water naturally follows. There are no gutters or downspouts. Cumberland Ironworks fabricated a metal scupper for the rear of the house; it is sited for overflow to land in a rock bed below. This low-impact water-management system negates the need for supplemental watering of the landscape.

This project was gratifying because of the nature of the restrictions placed on the design. We love how it’s a little quirky, yet fits in nicely with older homes on the island. 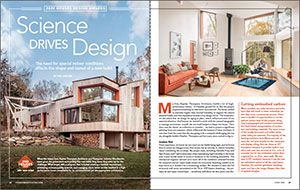 View All
View All Sheathing Articles