Is there a difference between hardwood and softwood OSB?

I was told by a salesperson at a pro lumberyard that one of the reasons their 7/16-in. OSB tends to be $1 to $2 more per sheet than the OSB in nearby big-box stores is that pro yards tend to stock OSB that’s mostly made from hardwood strands, whereas the big-box stores’ OSB tends to be made from softwood strands. He noted that OSB made from hardwood strands is stiffer, swells less when exposed to water, and is more decay resistant than softwood OSB. Is there really a difference, or is my salesperson blowing smoke?

After making a few phone calls to OSB manufacturers, I learned that the information coming from the lumberyard salesman isn’t the whole story. Brian St. Germain, the technical and quality manager of Louisiana-Pacific’s OSB group, said that mills in the South, Southeast, and Texas predominantly use southern yellow pine (SYP) in their OSB sheathing production, while Northern mills predominantly use aspen.

Allen Sealock, sheathing product technology director at Huber Engineered Woods, said it’s not uncommon for the same brand of OSB to be made from different species depending on where it’s manufactured. Unfortunately, many panels aren’t labeled with a physical location of manufacture, just a three-digit mill-identification number that you would have to match up via the website of the certification organization (either APA or TECO).

The supposed superiority of hardwood over softwood isn’t so cut and dried, either. Aspen is considered a hardwood, and SYP is a class of softwood species, yet SYP species have a higher density than aspen. So despite being made of softwood, SYP panels are actually heavier, stronger, and stiffer than aspen. But aspen has its perks, too. Because of its lower density, the panels have more strands of wood per panel, which creates a tighter edge and panel surface.

In terms of decay resistance, the durability of one species compared to another is tricky to evaluate. It seems worth noting, though, that only the heartwood (center) of a tree is naturally decay resistant. Untreated sapwood, regardless of species, has very little decay resistance. Because the OSB manufacturing process uses the whole log, which means both heartwood and sapwood, rot resistance seems to be a moot point.

In the end, all structural sheathing must meet the same requirements (either APA’s or TECO’s), so rest assured that from the standpoint of structural performance, all OSB panels are the same. 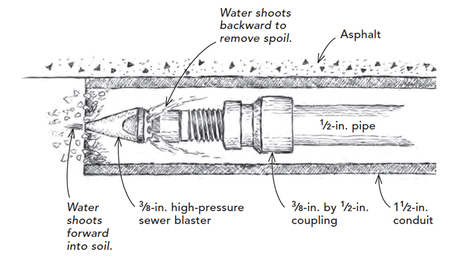 Run Pipe and Wires Under Slabs

A pressure washer attached to a length of pipe creates a tool for easily tunneling under driveways, patios, and more.