An interior door developed by students at the University of British Columbia provides a pathway for air between adjacent rooms, reducing pressure imbalances that can degrade the efficiency of forced-air heating-and-cooling systems.

The VanAir ventilated door allows the passage of air, but it also includes sound-dampening features that solve a problem common to houses with forced-air heating-and-cooling systems: how to equalize air pressure between rooms without sacrificing privacy.

Pressure imbalances are a well-known problem in forced-air systems, as described by senior editor Martin Holladay in this 2009 blog at GreenBuildingAdvisor.com.

Ideally, each room with a supply grille also would have a return-air grille. But to lower costs, many houses have a single, large, return-air grille in a central location such as a hallway or living room. When interior doors are closed, it’s difficult for return air to find its way to the return grille. Air pressure in the closed room builds up, forcing air into wall and ceiling cavities, while return air is pulled from the attic or other unintended source.

HVAC contractors have several ways of getting around the problem, such as installing through-the-wall transfer grilles or crossover ducts between a ceiling grille in a bedroom, for example, and a ceiling grille in the hallway. But both of these options also allow the transmission of sound, an unattractive tradeoff.

The door is headed for production

VanAir Design is the brainchild of a half-dozen students who enrolled in a course in 2012 called “New Venture Design” at the University of British Columbia. They built their prototype doors and conducted both laboratory and site testing at the Centre for Advanced Wood Processing. The company that sprang from that project now operates in Vancouver.

VanAir doors, which recently won a prototype award at an interior design show in Vancouver, will soon be going into production at Lynden Door, said Vick Yau, one of two principals at VanAir, by email. The doors will be available through Alliance Door Products in paint-grade versions or in a number of wood veneers, including fir, oak, maple, birch, cherry, and hemlock.

Doors will be produced in any size, Yau said, with the most common size a standard 3 ft. by 6 ft. 8 in. He said a final price list wasn’t yet available, but the doors would probably sell for between 15% and 20% more than a standard solid-core door.

A key consideration, as explained in Holladay’s blog, is how much free area is provided by a transfer grille (or in this case, a door) in order for it to be effective. Yau said the last prototype tested by VanAir had an equivalent open area of 50 sq. in., which could provide 100 cu. ft. per minute (cfm) of air at a pressure difference of 5 pascals, or 65 cfm at 2.5 pascals.

“We have recently commissioned a new testing lab to conduct tests on newer prototypes and on the production model, so I hope to give you more info/data down the road,” Yau said in a follow-up email. “We have built prototypes in the past that ranged from 36 square inches to 81 square inches in free open area. It is a matter of finding a balance between airflow and sound attenuation.”

Yau also said that tests found the VanAir door to have a Sound Transmission Class (STC) rating of 19, compared with the 21 STC of a solid-core door and the 14 STC of a hollow-core door. The higher the number, the better the material is at blocking sound.

This post was edited on Oct. 16 to reflect a revised value for free area equivalent from VanAir Design.

Interior pathways for air via vertical slots on both sides of the door are designed to eliminate pressure imbalances, improving heating-system efficiency and indoor comfort.

Air can move through passageways in the door, but the design impedes the movement of sound. 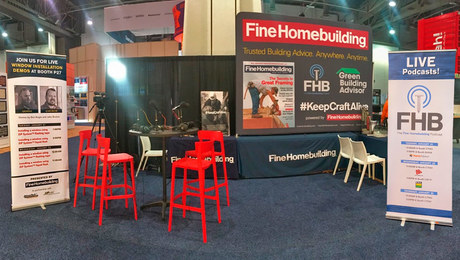 Fine Homebuilding's online coverage of the 2020 International Builders' Show includes a range of reports and podcasts, and all of it can be found right here.