Turning a quirky rustic lodge into a comfortable modern home is a problem-solving proposition.

About 100 years ago, an unknown fisherman built a quirky stone lodge on the banks of the Colorado River outside Austin, Texas. Over time, the house and the city both grew. The house acquired a series of unbecoming additions. The city ultimately encircled the once remote riverside property. For many, the value of the lodge would not have been the anomalous structure, but it’s location in a desirable commuter neighborhood. This project could easily have been a tear-down. But homeowner Steve Luning saw it differently. Steve had just visited Spain, where he was struck by the seamless integration of modern details into very old buildings. Not only did he admire the charm of the rustic old home, but he also saw the potential to modernize the house in a similar way.

To get the job done, Steve put together a stellar team—including Furman + Keil Architects, RisherMartin Fine Homes, and Mark Word Design—to help with the landscape plan and implementation. Even with decades of combined experience and talent, though, the team was challenged by site restrictions, structural irregularities, and ultimately, the complexity of executing their own design.

The original lodge was a seemingly simple structure with a cross-gable form. Like many old homes, a couple of additions were tacked on over the years as the owners needed more space. With design and construction said and done, the scope of work for this remodel could be seen as removing, redesigning, and rebuilding the additions while keeping the original cottage’s form and character. But that would be a gross oversimplification of all that the design and build teams accomplished.

No one is quite sure when the lodge was built or who built it. The stone is believed to have been collected from the river and the masonry work was likely part of an amateur, owner-built project. The original stone walls, which extend below grade to act as the foundation, varied in thickness from one to the next. And the gables were not even close to square. Though some of each original gable wall stayed intact, much of what looks original was rebuilt to repair a range of problematic conditions.

As Jeremy Martin, one of the principals at RisherMartin, put it, “This project had more problems per square foot than we’d ever seen.” If the unusual structure wasn’t enough, the site had a municipal drainage easement running through it and three Heritage live oaks, trees protected by the city above and below ground. If the project hadn’t been a remodel, it would have been nearly impossible to squeeze a new home into the lot and meet current zoning regulations.

Though the remodel earned a five-star rating from the Austin Energy Green Building program, Philip Keil, who led the design team, says that they didn’t think too much about achieving a particular designation. “We didn’t make decisions based on points,” he said. “We made our decisions to make sure  we were building the best house for Steve.”

Philip describes the floor plan, interior design, and new exterior elevations of the house as an arrangement of public and private spaces. The public living spaces are arranged within the footprint of the original cabin. Some of the supporting spaces—the powder room, pantry, and studio—are in an addition on the back of the house, which also includes the homeowner’s daily entry and mudroom. The bedrooms and office are in another addition on the opposite side, which is set at an angle to the lodge to follow the property line and maximize the size of the house.

While the interior design takes many of its cues from the original lodge, particularly the stone fireplace, it has modern elements too. For example, the white-oak flooring is set in a herringbone pattern and the white-oak cabinetry has a wire-brush finish, both chosen to carry the rich texture of the fireplace around the interior. The steel handrail in the entry, the steel-framed dining-room ceiling, and the plaster returns at the windows and doors give the house clean, modern lines.

Philip describes a similar approach to the exterior elevations, noting three specific features that make it work: the original stone gable walls; three new bump-outs for the main entry, dining room, and bedroom; and the stucco walls of the additions. The existing masonry walls maintain the character and shape of the lodge. The modern steel-and-glass bump-outs have a furniture-like quality. And the stucco walls provide a subtle backdrop for the old stone walls and new modern boxes.

An effort for the ages

RisherMartin is a fixed-price contractor; they provide a firm price for each project before construction begins. This means they do a lot of work leading up to construction. For Chris Risher, Jeremy’s partner, the most exceptional part of this project was the collaboration between their firm, the architects, and the landscape designers. From design and preconstruction documentation to rebuilding the home and installing the hardscape, the team tackled each challenge together.

Construction photos from the project reveal a ruinlike job site with three partial stone walls standing tall while the crew shores them up with shotcrete—sprayed concrete commonly used for pools—and pours new slab foundations for the additions. The lodge proper is built above a sealed crawlspace. The floors are framed like a deck, with ledgers hung on the masonry walls, now flattened by the shotcrete. The team decided to lower the height of the new slab foundations of the additions and frame the floors with sleepers so the finished floors have a similar feel to the wood-framed floors above the crawlspace. Spraying the masonry walls with shotcrete also provided an opportunity to square the walls—inside the home, at least. Outside, the walls are still not square.

The team engineered a new structural steel fascia—a continuous header, really—that runs along the eaves and rakes of the masonry walls and helps to hide their imperfections. Philip explains that steel fascia solves a couple of problems: “The projecting horizontal steel plate at the top of the stone acts as ‘trim’ to clean up the edge of the stone, which was very rough and out of square. The vertical leg of the fascia adds height to the wall, raising the ceiling in what was originally a very low space. The fascia profile also creates a shadow line at the top of the wall that emphasizes the shape of the structure and contrasts with the thin edge of the metal roof.”

Though Philip describes the simplicity of the home’s design, many of the materials were chosen for problem-solving reasons. Austin has a hot and humid climate, for example, so the team expected regular moisture migration through the masonry walls. While they used a liquid-applied vapor barrier on all of the new walls, they chose to manage the effect of moisture movement in the masonry walls instead of trying to stop its passage.

The team chose steel windows for the masonry walls, though they used wood windows in the new walls. They decided to use plaster instead of drywall for its natural durability and laid a limestone border around the perimeter of the interior to keep the wood flooring away from any moisture making its way through the masonry walls. In the additions, the mechanicals run in conditioned attic space. In the original home, the mechanicals run through the crawlspace. And the mechanical systems include a dedicated dehumidifier, now considered best practice in this climate and particularly important in this home.

Even the landscape, designed by Sarah Carr, a principal at Mark Word Design, had to solve problems. Specifically, the retaining walls that were planned to terrace the sloping site couldn’t obstruct access to a city drainage system that runs beneath the lot. The city accepted Sarah’s steel walls as an easily removable compromise. Sarah aligned the welds in the steel wall with bands in the board-formed concrete walls used elsewhere—­delicate concrete bands that Jeremy and the concrete contractor struggled to figure out how not to break when removing the concrete forms. And finally, as if this project weren’t challenging enough, the team decided to align the welds and the bands with the reveals in the garage’s open rainscreen siding on the other side of the driveway.

For a slide show of photos of this renovation, click here.

For even more photos and other details, click the View PDF button below. 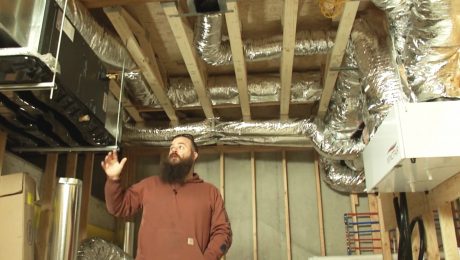 Ben explains how the components of this cutting-edge, energy-sipping mechanical system adequately heat and cool this home using as little energy as possible.